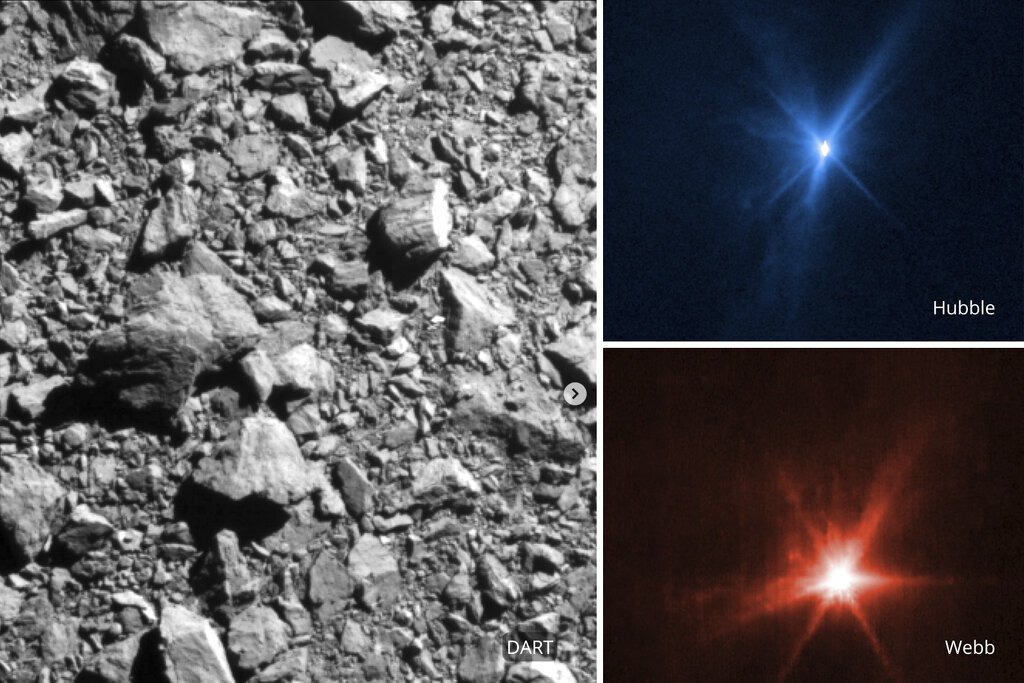 This combination of images provided by NASA shows three different views of the DART spacecraft impact on the asteroid Dimorphos on Monday, Sept. 26, 2022. At left is the view from a forward camera on DART, upper right the Hubble Space Telescope and lower right the James Webb Space Telescope.

CAPE CANAVERAL, Fla. — The world now has stunning new photos of this week’s asteroid strike, the first planetary defense test of its kind.

NASA on Thursday released pictures of the dramatic event taken by the Hubble and Webb space telescopes.

A few hours later, SpaceX joined NASA in announcing that they’re studying the feasibility of sending a private mission to Hubble, potentially led by a billionaire, to raise the aging telescope’s orbit and extend its life.

Telescopes on all seven continents watched as NASA’s Dart spacecraft slammed Monday into the harmless space rock, 7 million miles (11 million kilometers) from Earth, in hopes of altering its orbit.

Scientists won’t know the precise change until November; the demo results are expected to instill confidence in using the technique if a killer asteroid heads our way one day.

All these pictures will help scientists learn more about the little asteroid Dimorphos, which took the punch and ended up with a sizable crater. The impact sent streams of rock and dirt hurtling into space, appearing as bright emanating rays in the latest photos.

The brightness of this double asteroid system — the 525-foot (160-meter) Dimorphos is actually the moonlet around a bigger asteroid — tripled after the impact as seen in the Hubble images, according to NASA.

Hubble and Webb will keep observing Dimorphos and its large companion Didymos over the next several weeks.

The $325 million Dart mission was launched last year. The spacecraft was built and managed by Johns Hopkins’ Applied Physics Laboratory in Laurel, Maryland.

As for Hubble, NASA officials stressed Thursday that the observatory launched 32 years ago is in good shape and might have another decade of life left.

Hubble’s orbit constantly is decaying, but the telescope could have even more years ahead if it were boosted from its current 335 miles (540 kilometers) above Earth to 375 miles (600 kilometers) or more. The six-month technical feasibility study also will consider whether any parts could be replaced, presumably by a crew.

Jared Isaacman, a Pennsylvania tech entrepreneur who bankrolled his own SpaceX flight last year with contest winners, said a Hubble mission, if approved, would fit nicely into his planned series of spaceflights. But he stopped short of saying whether he was volunteering.