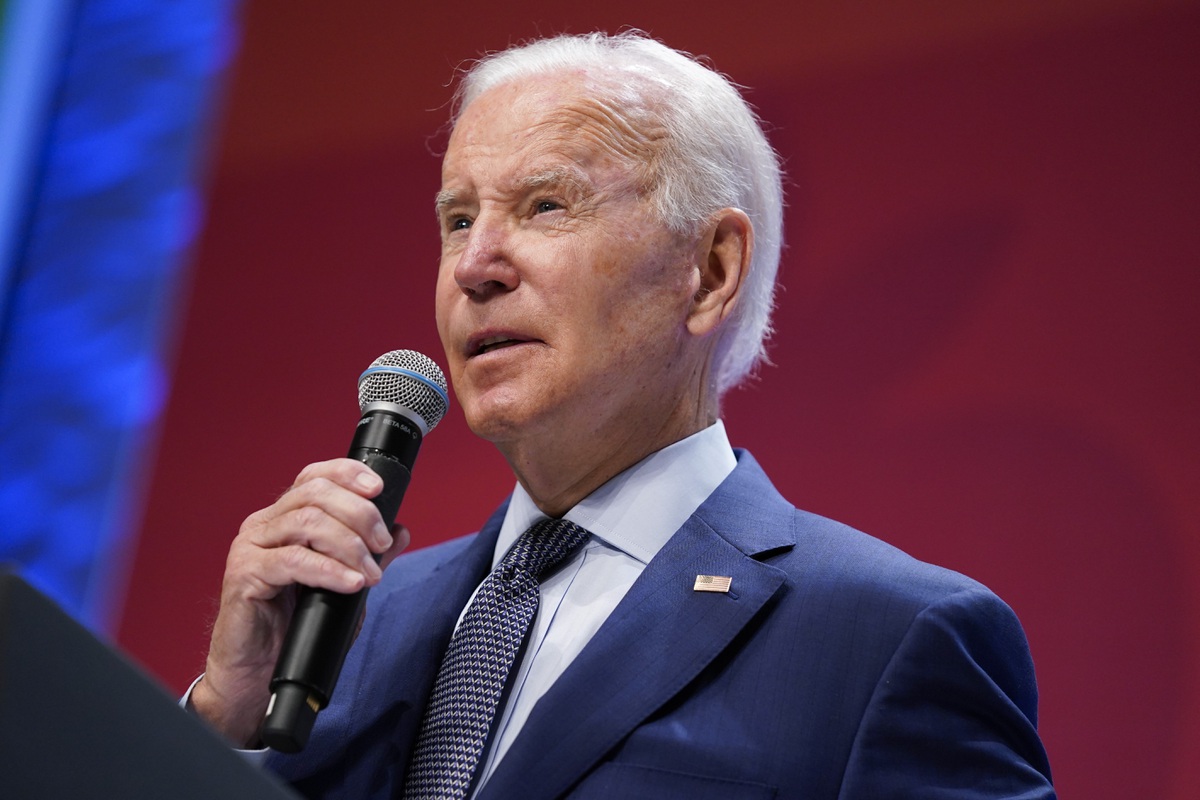 President Joe Biden speaks during the White House Conference on Hunger, Nutrition, and Health, at the Ronald Reagan Building, Wednesday, Sept. 28, 2022, in Washington.

WASHINGTON — Six Republican-led states are suing the Biden administration in an effort to halt its plan to forgive student loan debt for tens of millions of Americans, accusing it of overstepping its executive powers.

It’s at least the second legal challenge this week to the sweeping proposal laid out by President Joe Biden in late August, when he said his administration would cancel up to $20,000 in education debt for huge numbers of borrowers. The announcement, after months of internal deliberations and pressure from liberal activists, became immediate political fodder ahead of the November midterms while fueling arguments from conservatives about legality.

As the lawsuit was being filed, the Biden administration quietly scaled back eligibility rules for the debt relief, eliminating a relatively small group of borrowers who are the subject of legal debate in the suit. Those borrowers, whose loans are backed by the federal government but owned by private banks — a relic of defunct lending programs — are now ineligible for Biden’s debt cancellation, the Education Department said.

In the lawsuit, being filed Thursday in a federal court in Missouri, the Republican states argue that Biden’s cancellation plan is “not remotely tailored to address the effects of the pandemic on federal student loan borrowers,” as required by the 2003 federal law that the administration is using as legal justification. They point out that Biden, in an interview with CBS’ “60 Minutes” this month, declared the COVID-19 pandemic over, yet is still using the ongoing health emergency to justify the wide-scale debt relief.

“It’s patently unfair to saddle hard-working Americans with the loan debt of those who chose to go to college,” Arkansas Attorney General Leslie Rutledge, who is leading the group, said in an interview.

She added: “The Department of Education is required, under the law, to collect the balance due on loans. And President Biden does not have the authority to override that.”

The states of Iowa, Kansas, Missouri, Nebraska and South Carolina joined Arkansas in filing the lawsuit. Iowa has a Democratic attorney general, but the state’s Republican governor, Kim Reynolds, signed on the state’s behalf. The states argue that Missouri’s loan servicer is facing a “number of ongoing financial harms” because of Biden’s decision to cancel loans. Other states that joined the lawsuit argue that Biden’s forgiveness plan will ultimately disrupt revenue to state coffers.

In particular, the suit alleges that Missouri’s loan servicer will lose revenue from loans it owns through the Federal Family Education Loan Program — a program that allowed private banks to issue and manage federally backed student loans until the program was disbanded in 2010.

The Education Department updated its website Thursday saying borrowers with federal loans that are owned by private banks, including the FFEL program and Perkins loans, will now be ineligible unless they already consolidated their loans into the government’s direct lending program before Thursday. The change will reverse eligibility for about 770,000 borrowers, the department said.

Still, the administration has long said it was confident the forgiveness program would survive court challenges.

“Republican officials from these six states are standing with special interests, and fighting to stop relief for borrowers buried under mountains of debt,” White House spokesman Abdullah Hasan said Thursday. “The president and his administration are lawfully giving working and middle class families breathing room as they recover from the pandemic and prepare to resume loan payments in January. ”

Biden’s forgiveness program will cancel $10,000 in student loan debt for those making less than $125,000 or households with less than $250,000 in income. Pell Grant recipients, who typically demonstrate more financial need, will get an additional $10,000 in debt forgiven.

The administration also said it would extend the current pause on federal student loan repayments — put on hold near the start of the pandemic more than two years ago — once more through the end of the year.

The administration faced threats of legal challenges to its plans almost immediately, with conservative attorneys, Republican lawmakers and business-oriented groups asserting that Biden was overstepping his authority in taking such sweeping action without the assent of Congress.

Democratic lawmakers battling in tough reelection contests also distanced themselves from the student loan plan, as Republican officials called it an unfair government giveaway for relatively affluent people at the expense of those who didn’t pursue higher education.

In their lawsuit, the Republican attorneys general also contend that the forgiveness program violates the Administrative Procedure Act, which lays out how federal agencies should make regulations in order to ensure executive branch policies are well-reasoned and explained.

“The president does not have the authority to put himself in the place of Congress,” Rutledge said in the interview. “These actions must be taken by Congress, and he can’t override that.”

To justify the plan’s legality, the Biden administration is relying on a post-Sept. 11, 2001, law meant to help members of the military that the Justice Department says allows Biden to reduce or erase student loan debt during a national emergency. But Republicans argue the administration is misinterpreting the law because, in part, the pandemic no longer qualifies as a national emergency.

Another lawsuit against Biden’s student loan program was filed this week in an Indiana federal court by the Pacific Legal Foundation, a libertarian legal advocacy group that employs a lawyer who says he would be harmed by the forgiveness plan. The lawyer, Frank Garrison, says erasing his current debt load will trigger a tax liability from the state of Indiana, which is among at least a half dozen states where the forgiven loan amounts will be subject to state taxes.

A federal judge on Thursday rejected Garrison’s request to temporarily block Biden’s plan, saying there’s no evidence he will be “irreparably harmed” by the cancellation. Garrison was given until Oct. 10 to revise his argument.

The White House dismissed the lawsuit as baseless because any borrower who does not want the debt relief can opt out. The Education Department is still on track to unveil the application for the forgiveness plan in early October, and it sent an email to borrowers Thursday explaining how to prepare to apply. The email noted that applicants do not have to submit any supporting documents.

Republicans have also seized on the Biden plan’s price tag and its impact on the nation’s budget deficit. The Congressional Budget Office said this week that the program will cost about $400 billion over the next three decades. The White House countered that the CBO’s estimate of how much the plan will cost just in its first year, $21 billion, is lower than what the administration initially believed.