Opinion | With democracy at stake, it’s impossible to be too hard on Republicans | Plain Talk by Dave Zweifel 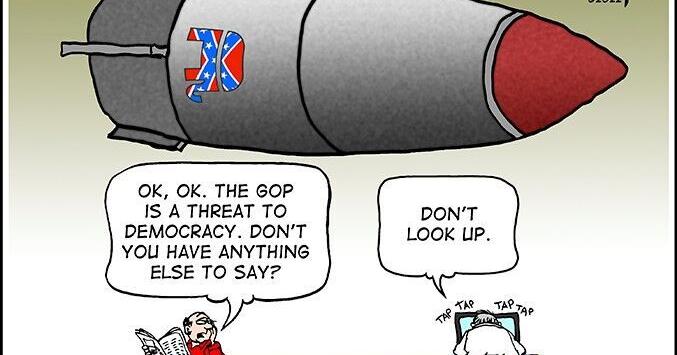 Every so often I’ll get an email from a disgruntled reader imploring me to stop being so hard on today’s Republican leaders.

You’ve made your point, is a recurring theme, so write about something else.

Frankly, I’d love to. But let me be clear about one thing: We must never let up on exposing the dangers so many of them present to the future of our country. If we ignore the lies, chuckle over the conspiracies and remain silent, we may well be ceding American democracy to the ashcan of history.

Look at how deep the lie about the 2020 election has penetrated the nation’s political psyche with a clear majority of Republicans agreeing that somehow the Democrats stole victory from Donald Trump, an absurdity that has been disproven over and over.

Unless we want to destroy forever the confidence in the very foundation of American democracy — free elections to pick our leaders — we cannot let this lunacy go unchallenged and spread even further. People who take the time to look at facts know it’s a lie, and they must be regularly reminded how dangerous it is, just as Trump and his cronies repeat and repeat the lie until many come to believe it’s true.

But it isn’t just about a stolen election. It’s the lie about a straw man called critical race theory and an appalling movement to ban hundreds of books that supposedly promote racial issues or make any mention of gays.

It was like this decades ago, only then the issue was communism, and, like today, conservative opinion leaders claimed school textbooks contained hidden messages promoting communism and disparaging American patriotism. And it wasn’t just a fringe that espoused that theory. One of its chief book banners was the celebrated conservative columnist and author William F. Buckley Jr.

As Jonathan Zimmerman set the stage in a recent issue of the Nation:

“Schoolbooks have embraced Communism, threatening young Americans’ patriotism and sexual morality. And behind it all lies a shadowy cabal of big businessmen, bent on demolishing the very system that enriched them.

“That’s what right-wing journalists wrote in the 1950s, at the height of the Red Scare. It’s easy to see parallels to that campaign in contemporary attacks on critical race theory and LGBTQ-themed lessons, which have become whipping boys on conservative media. Once again, the alarmists warn, students’ minds and bodies are at mortal risk. And ‘woke capital’ (think Disney) is the culprit, conspiring with ‘Marxist’ educators and politicians to destroy the nation.”

Zimmerman went on to point out that the people who made such claims then and are doing so today are a small minority.

The rest of us know that books like “Beloved” aren’t encouraging pedophilia or racism, any more than Robin Hood promoted communism, he wrote. And fortunately, PEN America, the American Library Association and a host of other organizations are fighting the new burst of book-banning, just as President Dwight Eisenhower and other respected Americans rallied against the book banners back then.

“As the Cold War precedent reminds us, the only way to protect freedom in our schools is to challenge the conspiracy theorists in our midst,” he added.

And then there’s the lie being promoted by Fox News’ Tucker Carlson and a cabal of conspiracy theorists that Democrats are recruiting immigrants to come to the U.S. to “replace” white people and secure their votes at election time.

Despite its blatant racism, this theory, once confined to the dark shadows of the internet, has come to be embraced by GOP members of Congress, right-wing commentators and Donald Trump creeps.

Its sudden pervasiveness is being blamed for inspiring the Buffalo, New York, mass shooter who declared he wanted to kill Blacks who are out to replace whites. He succeeded in murdering 10 of them.

“This isn’t about economic insecurity. This is about fear-wracked bullies demanding a permanent underclass to feel superior to,” commented the Chicago Sun-Times’ Neil Steinberg last week. “Now and then, some deeply disturbed, pathetic soul takes their BS seriously and kills people. You’d think this might cause their role models to consider the impact of their words, but such reflection is beyond them.”

And they need to be called out for the destruction they’re wreaking on America and its democratic values.

No, we can’t stop speaking out. They need to be sent back to their caves.