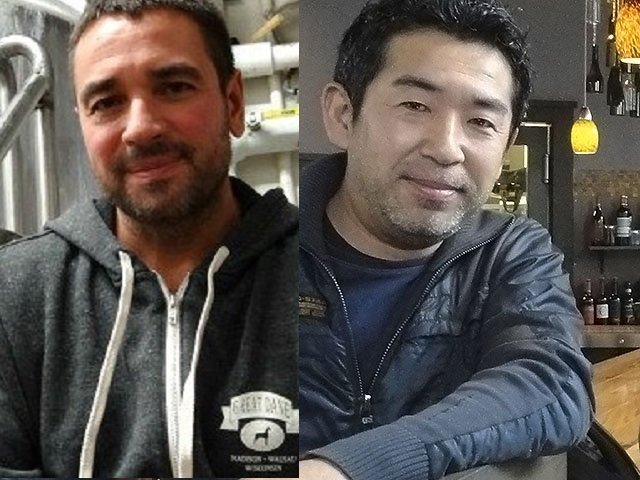 Rob LoBreglio, co-founder, co-owner and brewmaster of the The Great Dane Pub and Brewing Company has been working on plans since at least 2018 to open a brewery in Japan. Now, well-known Madison chef and restaurateur  Shinji Muramoto is part of the effort and LoBreglio says the two plan to leave Madison and relocate to Japan.

LoBreglio says the financial arrangements are now in place and construction is moving forward.

Muramoto, well known in Madison chef circles, was instrumental in popularizing Japanese and Asian fusion food in Madison with restaurants Restaurant Muramoto, Muramoto Hilldale, The Haze and 43 North. Muramoto will serve as company president which includes overseeing the brewery tasting room and restaurant side of the business. LoBreglio will be the chief operating officer. Both say they will live in Japan and guide the business venture well beyond its start-up phase.

“I’m going to be the brewmaster and will run the place, so I plan to be living in Japan by early 2023. The question is when am I coming back?” says LoBreglio.

Muramoto is originally from Sapporo, Japan, and his parents still live there. He has lived in Madison since 1992. Muramoto plans to keep his Hilldale business open.

Muramoto says he had been looking for a way to return to Japan. “It’s difficult to say this, but the older I get, it feels harder to fit into this country. So I have been looking for an opportunity to go back to Japan for the last couple of years,” he says. “When the opportunity came up I jumped at it.” Muramoto’s wife and children (ages 16 and 13) will remain in Madison for the time being.

Muramoto, when he opened his first restaurant in Madison, had the goal of introducing Japanese food with an American twist; now he wants to introduce Japan to American brewing with a Japanese twist, he says.

The brewery is being built in Akiu, a hot spring resort community about a half-hour from the larger city of Sendai. It will be branded as Great Dane Brewing. “It will be distinctively Japanese, so it won’t look exactly like the Great Dane here,” says LoBreglio.

Now that the project has been approved by the Japanese National Bank and the worst of COVID is, hopefully over, LoBreglio says he intends to have an official groundbreaking in August or September. He wants to be brewing there by next spring.

The Japanese Great Dane will be different from its Wisconsin counterparts because it will primarily be a 9,500-square foot production facility with a dedicated canning and bottling line. Most of its product will go into cans for retail sales. It will have a two-story tasting room with views of the brew house and a restaurant; however, those aspects are managed separately, unlike what is called a brewpub in the U.S.

LoBreglio says the facility will have a 30-barrel brewing system that is capable of making 15,000 barrels of beer a year. The main packaging will be in 350 mL cans (roughly equivalent to 12-ounce cans in the U.S.). Some bottling is envisioned for specialty markets like resorts and restaurants where it is customary to share a large-format bottle among friends over a meal.

The brewery will start with at least one year-round beer; LoBreglio says he’s still using his Madison brewpubs for recipe development. The first beer will be a lager, made with traditional European noble hops and a light amount of caramel malt. That will make it somewhat similar to the German pilsner found on tap in the Great Danes around Madison.

LoBreglio also plans to install a small pilot system that will supply beers to the tasting room where he hopes to keep 12-14 beers on tap.

The brewery is located on a former rice farm. A two-acre area of the brewery grounds will be used to grow hops. LoBreglio plans to combine local hops with locally grown rice to make special seasonal releases for the taproom. “We are looking forward to having an educational arm. While they do have craft beer in Japan we certainly hope to push the envelope over there,” says LoBreglio.

If successful, the longer-term vision for the Great Dane in Japan is to connect the Akiu brewery to tied house restaurants in the region, especially in Sendai and even Tokyo. Muramoto’s role will be to provide oversight of those additional taprooms. “I’m really excited to help introduce real American beer culture to Japan,” says Muramoto  He can also be a middle man in business conversations because he speaks both Japanese and English.

LoBreglio also wants to maintain a close working relationship with his Wisconsin brewpubs. While it seems obvious that his specialty beers in Japan will often be based on his experiences in the U.S., LoBreglio hopes to share ideas and recipes back and forth. That could mean some of the local Great Danes will offer specialty beers that were created in Japan. There’s also an idea to install video links in all of the pubs that will connect patrons and staff, and events, when the time zones differences allow.

LoBreglio has long-standing ties to Japan and has traveled extensively throughout the county. His brother, John, is a professor of Japanese studies in England. The Great Dane has also been a training ground for a number of Japanese brewers over the years. Among those was Tetsuya Kiyosawa, who worked in the downtown brewhouse with LoBreglio in the 1990s. Kiyosawa eventually returned to Japan and worked in various beverage industry positions including the Yoho Brewing Company, one of Japan’s largest craft breweries. Throughout that time he stayed in touch with LoBreglio and is now one of three Japanese investors in the Akiu Great Dane.

Along with LoBreglio and Muramoto, other U.S. investors in the Great Dane’s Japan venture include Great Dane co-owner Eliot Butler and former Madison-area sport media personality Phil Dawson, who has been living and working as a brewer in Sendai. Dawson will serve as an assistant brewer in the Akiu Great Dane.