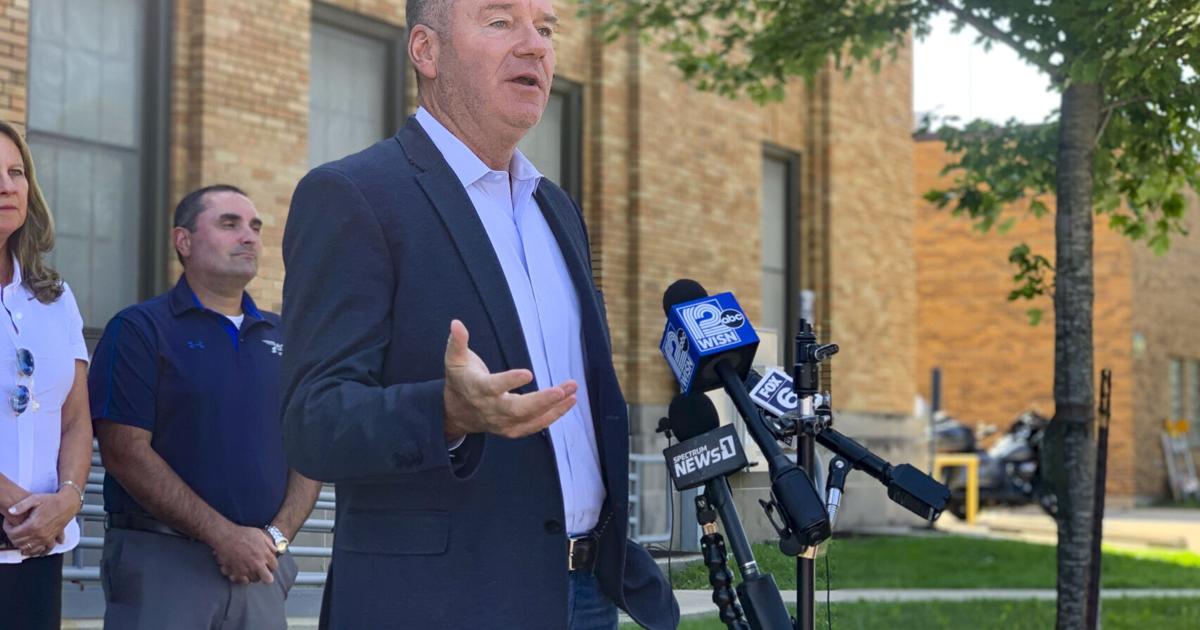 MILWAUKEE — Republican gubernatorial candidate Tim Michels said Tuesday that he would be willing to increase state funding to local municipalities to bolster police departments in Wisconsin — putting him in alignment with incumbent Gov. Tony Evers, a Democrat, and at odds with GOP lawmakers who control the Legislature.

Speaking to reporters in Milwaukee, Michels, a construction magnate endorsed by former President Donald Trump, said addressing crime in the state would be a top priority for his administration and left the door open for ways to achieve that goal.

“There’s $43.5 billion that is spent every year in the state budget,” Michels said. “If we have to spend a little bit more money to make law enforcement more effective — to hire more police officers — absolutely, we will do that.”

In response to a question about whether or not he believes the GOP-controlled Legislature has failed to adequately fund law enforcement in Wisconsin, Michels said “the Legislature and every organization in America … all need firm leadership.”

“That’s what I’m going to bring to Madison,” he continued, adding that he “will work with the Legislature. We will make sure that we get the funding right. “

“There is a projected $5.4 billion budget surplus right now. What are we going to do with that extra money?” Michels asked rhetorically. “Number one, we’re going to lower taxes so people aren’t being overtaxed. Number two, we’ll sit down with the Legislature, we’ll decide what the appropriate amount of money is for law enforcement because it is one of my biggest priorities.”

“For years, Republicans have forced communities to do more with less — that’s why Gov. Evers is working to give communities the tools they need to combat violent crime,” Roecker continued, adding that Evers invested over $100 million of federal COVID-19 relief money into community safety and violence prevention as well as to support law enforcement agencies.

Evers drew a direct line between cuts to state money received by municipalities under Republican former Gov. Scott Walker and their inability to recruit and retain police officers. He said processes like hiring police officers and providing wage increases to retain them are local issues, and that “the state’s main responsibility around that issue is shared revenue.”

“I don’t know how people can expect municipalities to ramp up any sort of (public safety) effort without increasing shared revenue,” Evers said in March.

Over the last decade, Wisconsin has seen a 15% decrease in the number of law enforcement officers working in the state, the Badger Project reported last May. During mostly the same period — from 2014 to 2021 — shared revenue from the state to local municipalities has barely grown. In fact, adjusted for inflation, local governments actually received more money from the state in 2014 than they did in 2021, according to Department of Revenue data.

Republicans’ decision to cut the amount of money sent to local governments has a history of being unpopular among police officers.

In 2014, for example, the Wisconsin Professional Police Association contended that Walker’s cuts to shared revenue and the spending controls imposed on local governments resulted in fewer “real dollars” — that is, totals adjusted for inflation — being spent on law enforcement.

Share your opinion on this topic by sending a letter to the editor to tctvoice@captimes.com. Include your full name, hometown and phone number. Your name and town will be published. The phone number is for verification purposes only. Please keep your letter to 250 words or less.