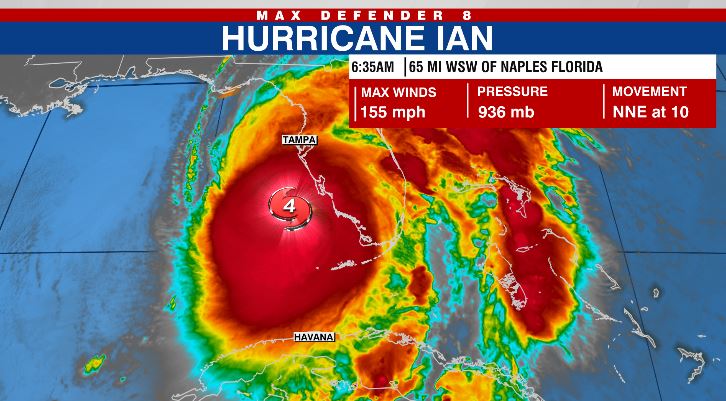 In an updated statement at 9 a.m., the NHC said conditions are rapidly deteriorating along the southwest Florida coast as recent data indicated that maximum sustained winds have increased to near 155 mph.

The NHC predicted that the greatest risk of deadly storm surges would be in the area from Sarasota to Naples. Residents in these areas were told to head evacuation orders from local officials.

As of 7 a.m., Hurricane Ian was tracked about 55 miles west of Naples, and 60 miles southwest of Punta Gorda with maximum sustained winds near 155 mph – making it a powerful Category 4 major hurricane. The storm is moving north-northeast at about 10 mph.

Ian is expected to make landfall as a major Category 4 hurricane on Wednesday. Model data showed Ian continue to shift further to the south and east, moving Tampa Bay out of the line of a direct hit.

“This means the storms will move onshore more quickly and as a stronger storm,” WFLA Meteorologist Rebecca Barry said. “The worst of the impacts will be to the south of Tampa Bay. Sarasota, Hardee, eastern Hillsborough and Polk will see the heaviest rainfall and we are concerned we will see damaging flooding as a result of the downpours. Storm surge becomes less of a threat with this shift in the track.”

Ian is expected to approach the west coast of Florida Wednesday morning, and move onshore later in the day, according to the NHC. The center of Ian is projected to move over central Florida Wednesday night and Thursday morning before it emerges over the western Atlantic by late Thursday.

“Expect conditions to deteriorate throughout the day on Wednesday and the worst of the winds to push through overnight Wednesday night into Thursday,” Barry said.

The NHC says Category 4 hurricanes can cause “catastrophic damage” to well-built homes, particularly roof structures and/or some exterior walls. Most trees will be snapped or uprooted and power poles downed. Power outages can last weeks to possibly months.

Aside from the hurricane-force winds, tornadoes are also possible across central and south Florida.


‘Key West is under water!’ Video shows flooding under house in Florida Keys

Central Florida and northeast Florida are expected to see 12 to 18 inches of rain, with isolated totals possibly reaching a maximum of 24 inches. The Florida Keys and south Florida could see six to eight inches of rain with local maximum totals of 12 inches.

Eastern Georgia and coastal South Carolina can also expect four to eight inches of rain from Ian, according to the NHC.

Central Florida is forecast to have “widespread catastrophic” flash, urban, and river flooding while considerable flooding is expected for southern and northeast Florida, along with parts of Georgia and South Carolina.

At 9 a.m. Wednesday, the NHC issued a new storm surge warning for the Lower Florida Keys.

The areas below are expected to experience the following levels of storm surge:

The NHC said the deepest water will be near and to the right of the hurricane’s center, where large waves will accompany the storm surges. The flooding is dependent on the timing of the surge and the tidal cycle, creating varying levels of floodwaters over short distances.

A Hurricane Warning is in effect for:

A Storm Surge Warning is in effect for:

A Tropical Storm Warning is in effect for:

A Storm Surge Watch is in effect for:

>> Where to find sandbags