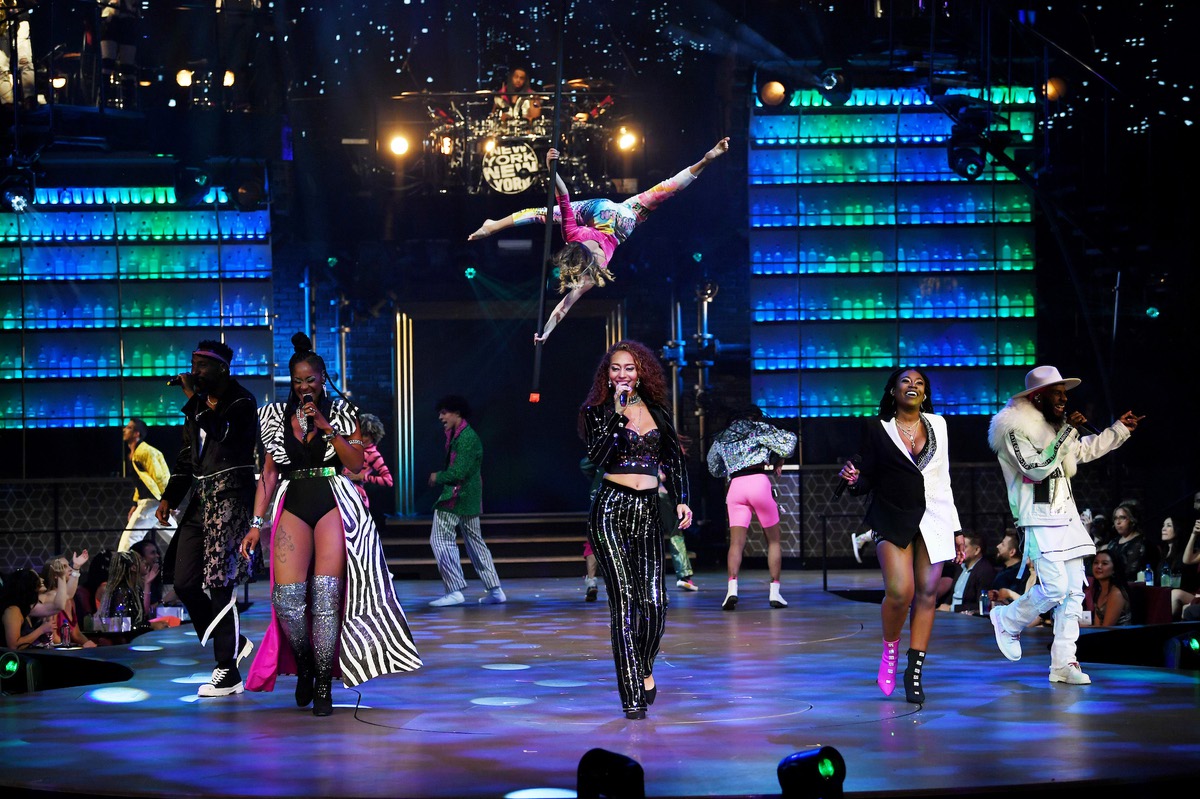 Singers, dancers and acrobats take the stage during one of the opening scenes of “Mad Apple.”

“Mad Apple” opened for preview shows at New York-New York in mid-May and celebrated its grand premiere on May 26 in front of an energetic audience including many celebrities and Las Vegas entertainment industry figures. It’s definitely recognizable as a Cirque du Soleil show, but it’s definitely different from the company’s other successful productions currently running on the Strip.

There’s an emphasis on music, but the show doesn’t celebrate specific artists as is done in “Michael Jackson ONE” and “The Beatles LOVE.” The new show is packed with comedy, but its sense of humor is a far cry from the family-friendly clowning in “Mystère” at Treasure Island or “O” at Bellagio.

“‘Mad Apple’ is a completely new approach to Cirque du Soleil entertainment,” Eric Grilly, president of resident and affiliate show divisions, said in a statement. “It’s an action-packed experience designed for today’s audience, who increasingly want to consume entertainment as they do content — in an exciting, highly compelling and ever-shifting manner. With ‘Mad Apple,’ you never know what’s coming next.”

Co-created by Simon Painter and Neil Dorward, the fast-paced, New York City-themed show is the first collaboration between Cirque du Soleil and The Works, Painter’s company that was acquired by Cirque in 2019. That fresh perspective certainly helps “Mad Apple” stand out from other Cirque productions in Vegas, and distinguishes it from other variety shows on the Strip. It hits the stage Friday through Tuesday at 7 and 9:30 p.m. and tickets are available at madapplelv.com.

There are several elements Las Vegas audiences have never seen before in a Cirque show, and they’re all tons of fun:

There’s a bar onstage. Actually, there are three bars on the stage, all of which are accessible to the audience for 45 minutes before the curtain rises. And there’s quite a bit of informal entertainment from some of the cast members during this pre-show period, which goes a long in setting up the free-flowing, cabaret vibes — this show is a wild night out.

There’s stand-up comedy. Two hilarious comedians — frequent Vegas performer Brad Williams and Harvard College Stand-Up Comic Society founder Harrison Greenbaum — took the stage and performed their very different stand-up acts, as themselves, not as characters. This element is both an homage to the great comedy clubs of New York City and a tip of the hat to the traditional Vegas variety show that allowed individual entertainers to shine without a script or plot. And there’s a fair amount of raunchy humor involved in “Mad Apple,” particularly from Williams. You’ll laugh so hard, you’ll forget you’re at a Cirque show.

There’s a hair-aerial artist. Acrobatic aerial performers are standard in Cirque’s works, particularly in “Zumanity,” the former inhabitant of this New York-New York Theater for almost two decades before the pandemic. They might swing from chains, hang from hoops or dangle from silks, but the “Mad Apple” act is an awe-inspiring sky dancer who goes hands free — because she’s suspended by her hair. You have to see it to believe it, and even then it’s hard to wrap your head around … what she’s wrapped her head around.

There’s a slam-dunk contest. An army of acrobats takes the stage for a rousing routine of trampoline jams into an actual basketball hoop, and then they shift things up, flipping and flying toward the audience, catapulting themselves through slightly larger hoops. It’s incredibly exciting, very unexpected, and a great example of the sensory overload that happens throughout “Mad Apple.” Live musicians, singers and dancers often flank the circus-style performers, creating a visual spectacle that overwhelms in the best way possible.