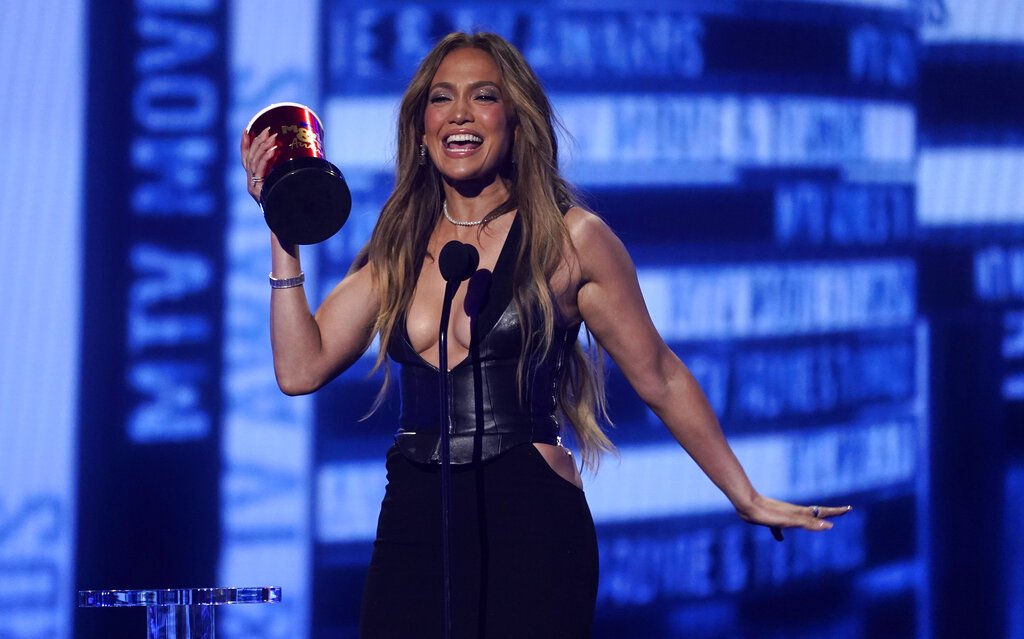 Jennifer Lopez accepts the award for best song for “On My Way (Marry Me)” at the MTV Movie and TV Awards on Sunday, June 5, 2022, at the Barker Hangar in Santa Monica, Calif.

LOS ANGELES — Jennifer Lopez made an emotional speech about how believers and skeptics contributed to her success, as she accepted a career achievement honor at the MTV Movie & TV Awards on Sunday.

“I want to thank the people who gave me joy and the ones who broke my heart — the ones who were true and the ones who lied to me,” said Lopez, who nabbed this year’s Generation Award for actors whose diverse contributions have made them household names. She also took home best song — a new category — for the track “On My Way” from the “Marry Me” soundtrack.

MTV’s youth-focused celebration of film and TV offered a lighter, breezier awards show, with 26 categories in gender-neutral categories like best villain, best kiss and new category “here for the hookup.” Hosted by Vanessa Hudgens, the ceremony returned to a live format after being pre-recorded for several years.

Lopez shed tears as she thanked fans, her longtime manager and children for “teaching me to love,” bringing the audience to their feet at the Barker Hangar in Santa Monica, California.

“I want to thank the people who gave me this life,” said Lopez, 52, later adding, “You’re only as good as the people who you work with. But if you’re lucky, they make you better. I’ve been very lucky in that regard.”

Lopez’s first breakthrough came as a dancer on the 1990s sketch comedy series “In Living Color.” She pursued an acting career and landed a leading role in “Selena” in 1997. She would go on to appear in such films including “Anaconda,” “Out of Sight,” “The Wedding Planner,” “Hustlers” and her latest, “Marry Me.”

As a singer, Lopez has earned success on the pop and Latin charts with multiple hit songs and albums. She released her multi-hit debut “On the 6” in 1999 and topped the Billboard Hot 100 chart with songs like “If You Had My Love,” “All I Have” and the remixes of “I’m Real” and “Ain’t It Funny.”

And in 2020, Lopez performed during the Super Bowl halftime show alongside Shakira.

“Spider-Man: No Way Home” entered the awards as the leading nominee with seven. It took home best movie, and the film’s star Tom Holland won for best performance in a movie. With almost $1.9 billion earned at the box office, it was the biggest film of the year and a fan favorite, but was largely overlooked by the major awards shows.

Zendaya won for best performance in a show for her role in “Euphoria,” which came away with best show. The HBO series also won here for the hookup.

Early in the broadcast, 19-year-old singer Olivia Rodrigo won best music documentary for her project “Olivia Rodrigo: driving home 2 u.” Rodrigo, who won three Grammys this year including best new artist, spoke about the importance of creating the film, which involves a road trip, live performances and reflections on her debut album “Sour.”

“I made ‘driving home 2 u’ for the fans, especially those who couldn’t come to see me on tour,” Rodrigo said.

“I need a little blast of oxygen,” he said before rattling off several films he starred in, like “School of Rock” and two “Jumanji” films. He played in other comedies including “Shallow Hal,” “Tropic Thunder” and the animated “Kung Fu Panda” franchise films, where Black voiced the main character.

“Comedic genius. C’mon are you kidding? For what?” he said. “I don’t deserve this, but I’ll take it.”

The ceremony kicked off with “Loki” star Sophia Di Martino winning breakthrough performance for her role as Sylvie on the Disney Plus television series. After the actor claimed her trophy, she talked about being 9 months pregnant when she was offered the role, and her baby being just 3 months old when she started filming.

“It’s been quite the journey, so this really means a lot to me,” she said. “Thank you to the audience. It’s all for you. Thank you for letting Sylvie into your imaginations.”

Daniel Radcliffe won best villain for his portrayal of a billionaire in the adventure comedy “The Lost City.”