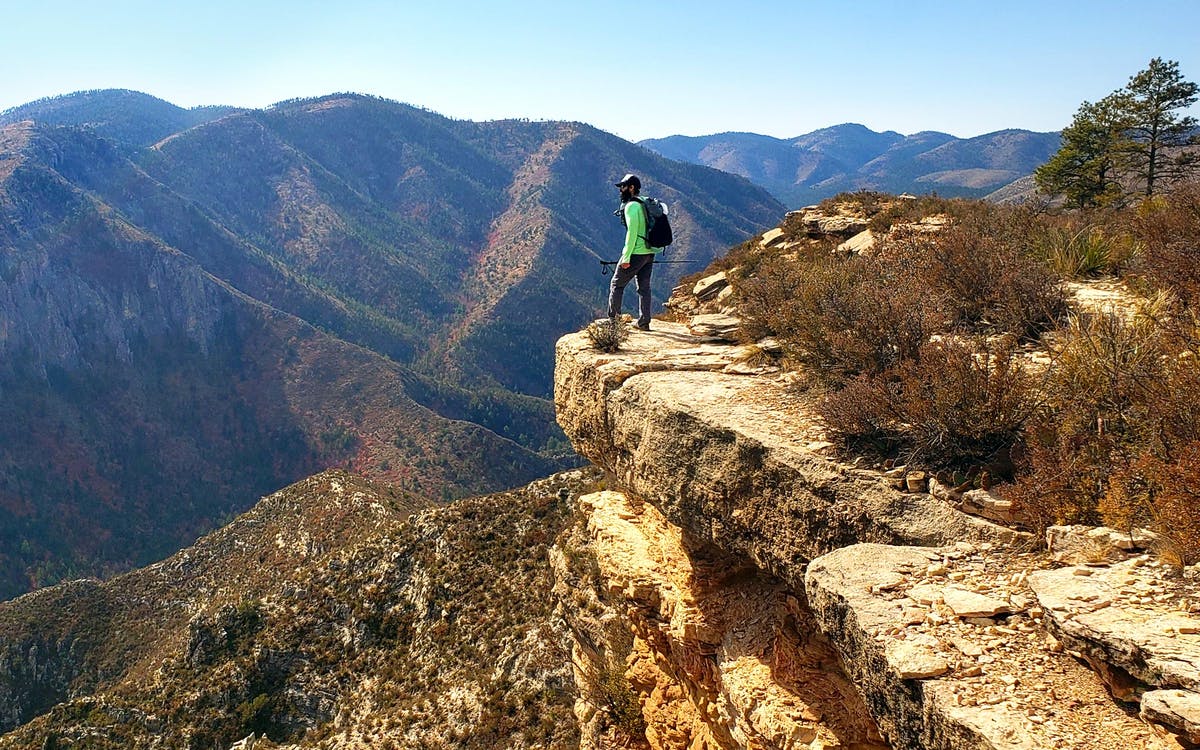 Growing up just above sea level in Houston’s Sharpstown neighborhood, Rafael Mujica could hardly imagine camping in a tent, much less summiting the state’s tallest mountains. Earlier this spring, the 36-year-old native Texan completed that project—a feat he claims to be the first to have accomplished—despite not sleeping under the stars until he was in Marine Corps boot camp. Mujica’s experience at the Mountain Warfare Training Center in Bridgeport, California, inspired his exploration of Texas’s high elevations. In multiday drills, he and his squad hid as if they were in enemy territory and survived in the mountainous terrain using limited supplies. “It was such a stark contrast to where I grew up and was raised in Houston, but also a stark contrast to the everyday chaos that comes with being an infantry Marine,” Mujica recalled. “There’s nothing but wind. You’re trained to be in enemy territory, so you don’t even talk to each other; we used hand signals.” He said the peace and quiet that he found in the Sierra Nevada inspired him to continue exploring the outdoors even after he moved back to Texas to attend college at Texas State University. In 2018, Mujica returned to California to hike the Pacific Crest Trail. From a lookout point on Mount Whitney, California’s tallest mountain, he wondered what comparable views awaited him back home. “Sure enough, I went out to West Texas and discovered Guadalupe Mountains National Park,” he said.

After he climbed Guadalupe Peak, Mujica went down a rabbit hole of internet forums such as Peakbagger.com, which climbers use to log their summits and share notes with others. On that website, he learned about the Texas parks and researched the mountains he’d add to his list. “I just love the places least traveled,” Mujica said. “Guadalupe Peak is basically a highway, but there’s so many parts of these parks that are majestic and don’t see much traffic.” Only about half of the mountains on Mujica’s “ten tallest” list, which includes two unnamed peaks, have established trails. The rest require a combination of route finding, bushwhacking, map building, and other backcountry-climbing techniques to reach the top. First, Mujica set out to hike the “Guadalupe High Route,” a loop he created that includes six of the mountains on his top ten list—Guadalupe, Hunter, Shumard, Bartlett, Bush, and Peak 7916—in addition to twelve minor peaks. The loop covers nearly 15,000 feet of elevation gain over 55 miles. “After six, I thought that six isn’t a good, round number, so why not ten?” Mujica said. He set out to individually climb the other four peaks: Mount Pratt and El Capitan in the Guadalupe Mountains and Baldy Peak and Peak 8040 in the Davis Mountains. But completion was delayed by the COVID-19 pandemic, which led to the years-long closure of the Davis Mountains Preserve. When Mujica learned that the Nature Conservancy would reopen the park to the public, he booked the first available day pass he could find. In March, he crossed the last two mountains off his list, completing his three-year journey.

Although Mujica may be the first to climb the state’s ten tallest mountains, he certainly wouldn’t be the first to stake claim to Texas’s mountaineering lifestyle. National Park Service volunteer Rob Junell has climbed Guadalupe Peak more than two hundred times. The mountains of West Texas aren’t his first pick (he prefers the vistas from New Mexico’s Wheeler Peak). They are, however, a convenient drive from his San Angelo home. John Lominac, a Houstonian who has climbed the eight major peaks in Guadalupe Mountains National Park, may be right on Mujica’s heels when it comes to bagging a similar variety of Texas mountains. “This isn’t like Washington State, but I think someone that’s living in Texas would absolutely get their fill with what Texas has to offer in the form of adventure and climbing peaks,” said Lominac. He plans to visit the Davis Mountains Preserve soon to scale those mountains as well. Although he’s met plenty of Texas mountain climbers through Facebook groups, Lominac said he’s never met anyone who could lay claim to Mujica’s achievement.

Mujica’s friend Patrick Welsh, whom he met through a Reddit forum dedicated to ultralight backpacking, also got the itch for higher ground. “I’m from Indiana originally, so even less mountainous than Texas,” said Welsh, who joined Mujica in climbing three peaks on his list. “Growing up in an area like the Midwest, where you don’t have any mountains, you start to wonder what those wide-open views would look like.” He said access to technical climbing in Texas is no match for what can be found in states like Alaska or Colorado, where he’s climbed several mountains taller than 14,000 feet in elevation. Texas doesn’t have any “fourteeners,” as mountaineers refer to the tall peaks—our state’s tallest mountain, Guadalupe Peak, stands at 8,751 feet. But Welsh said what makes climbing in Texas more difficult than hiking some taller mountains is the array of thorny plants and jagged rocks that will tear at your legs. Mujica said that the hardest mountains he climbed in Texas were those that required off-trail bushwhacking through thick cacti and bushes, which he found in droves while trekking up Shumard and Bartlett Peaks.

Besides battling the brush and gambling with the Texas heat, Mujica had to practice and learn new skills such as scrambling, an act of walking up steep (and sometimes loose) ground that involves the use of one’s hands to ascend. Learning to read topographic maps is another key component to route finding in uncharted areas. If the lines are too close together in one area, they indicate a route too difficult to pass without ropes. “The further apart they are, the more gentle the slopes and gradual the change in elevation. We’re not equipped to do any technical climbing, so we need to make sure the route is hikeable with moderate scrambling,” Welsh said. “I wouldn’t say either of us are classically trained mountaineers; we’re just backpackers who go at it.”

The process of creating new maps and routes was based on trial and error. To do so, Mujica used satellite imagery and CalTopo, an open-source backcountry-mapping platform with which users can utilize multiple layers of maps and route information from other hikers. The process of charting out new paths has also been full of unexpected discoveries for trailblazers leading the charge. “There’s a B-24 plane crash that no one knows about. There’s a Native American grave from 1855 that I found right off the highway. Butterfield Stagecoach [an overland postal service driven by horse-drawn carriages] used to run through that area,” said Lominac.

Mujica’s own time exploring the Lone Star State’s mountains has come to an end for now—he moved earlier this year to Arizona, where he recently hiked about two-thirds of the Arizona Trail’s eight hundred miles. Still, he hopes to inspire a new generation of mountain climbers, especially those who share his heritage. “I’m Latino . . . I never saw anyone that looks like me do anything like this,” he said. As for his next high-altitude project, he’s already thinking about climbing the ten tallest peaks in his new home state. But first, he said he plans to take care of other things he’s been putting off—spending time with his new wife, buying a home, and building out a van so that someday he can take his adventures on the road.