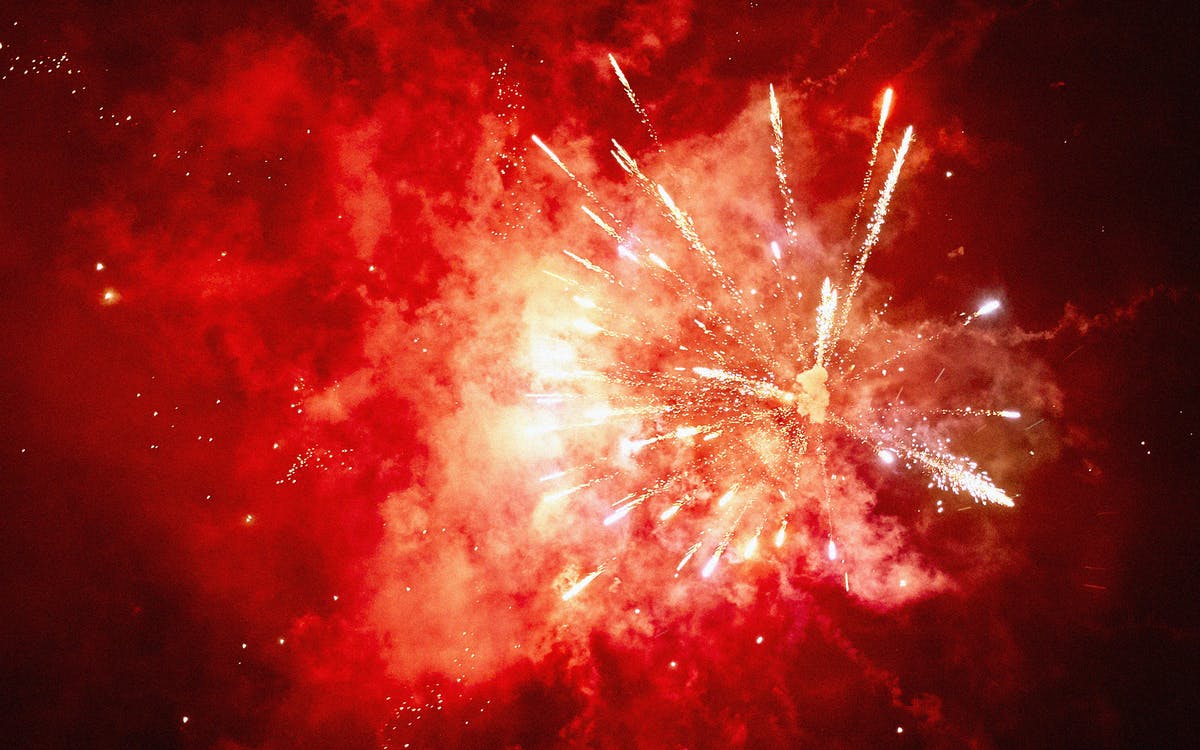 Fourth of July traditions are important to so many of us. Going swimming as the hottest stretch of summer kicks off! Gathering with friends, family, and neighbors to grill up a bunch of hamburgers and watch Joey Chestnut win the Nathan’s Hot Dog Eating Contest! Heading to the park to watch the fireworks show! Now there’s a new tradition: accidentally setting off wildfires during an intense drought as we launch those fireworks.

On Monday, the first bunch of traditions were, in many parts of the state, overshadowed by that last one. While some municipalities canceled their displays in response to drought conditions—the Hill Country cities of Boerne and Fredericksburg among them—others continued, guided by optimism and a “hope for the best” approach. In Fort Worth, the city’s annual fireworks display on Panther Island, billed as the largest in North Texas, lasted only minutes before being canceled by the city “out of an abundance of caution” as grass fires broke out on the banks of the Trinity River. Emergency crews responded quickly to prevent the fires from growing and fully extinguished them by 10:45 p.m., with no reports of injuries.

The images from before the fires were quelled look vaguely apocalyptic, with flames blazing behind a celebratory crowd. Video is even more stark in its contrasts, with the lights of emergency vehicles flashing before the glow of the flames as a PA system blares Miley Cyrus’s “Party in the U.S.A.”

Fort Worth wasn’t alone in accidentally igniting flames on the dry ground. Thirty minutes west, in Parker County, where commissioners had banned individual firework sales to prevent those celebrating from sparking fires, the official Boomin’ Fourth event in Hudson Oaks quickly became the Blazin’ Fourth. The field at Gene Voyles Park caught fire within thirty seconds, according to sports reporter Jamie Plunkett. (There’ve been no reports of damage.)

Elsewhere in the state, firefighters were kept busy by individuals setting off their own fireworks displays and occasionally burning their neighbors’ homes. On San Antonio’s northwest side, two families were displaced by flames believed to have been started by fireworks. In Spring, a suburb of Houston, firefighters put out a blaze after fireworks struck a chimney in a subdivision. In the Central Texas city of Killeen, where fireworks are illegal, the city’s Stillhouse Bridge caught fire after individuals set off displays.

Grass fires were even more prevalent. In the Houston area, crews were kept busy throughout the weekend addressing grass fires, including one that spread over three acres during a Friday night fireworks show in Cypress. In Central Texas, officials responded to five grass-fire calls in a 25-minute period in Temple. Out west, in Lubbock, the National Weather Service warned locals that “you’re likely putting life and property at risk if you’re shooting fireworks tonight” and then tracked numerous grass fires throughout the area sparked by those who apparently hadn’t heeded the admonition. And back in Fort Worth, Panther Island was only the beginning—fire crews responded to 189 calls by 11:30 p.m., up from a mere 17 calls on the same day the previous year.

Some number of fires stemming from fireworks is to be expected, even when drought conditions are minimal. The year 2022 is much drier than most we’ve seen in the past decade, though. In at least 65 percent of Texas, drought conditions are described as severe, extreme, or exceptional, and only about 4 percent of the state is without drought concerns of any kind (mostly in the Rio Grande Valley). The worst drought year in Texas on record was 2011, and in some parts of the state—primarily West Texas—the current drought has left the ground drier than it was in that record year.

The risks that those conditions bring are serious. The 2011 drought was responsible for more than $7.6 billion in agricultural losses stemming from crop and livestock issues, and similar losses are likely if weather patterns continue as expected. And that’s to say nothing of the risks of accidentally burning down your neighborhood as you celebrate your independence. “Party in the U.S.A.,” indeed!