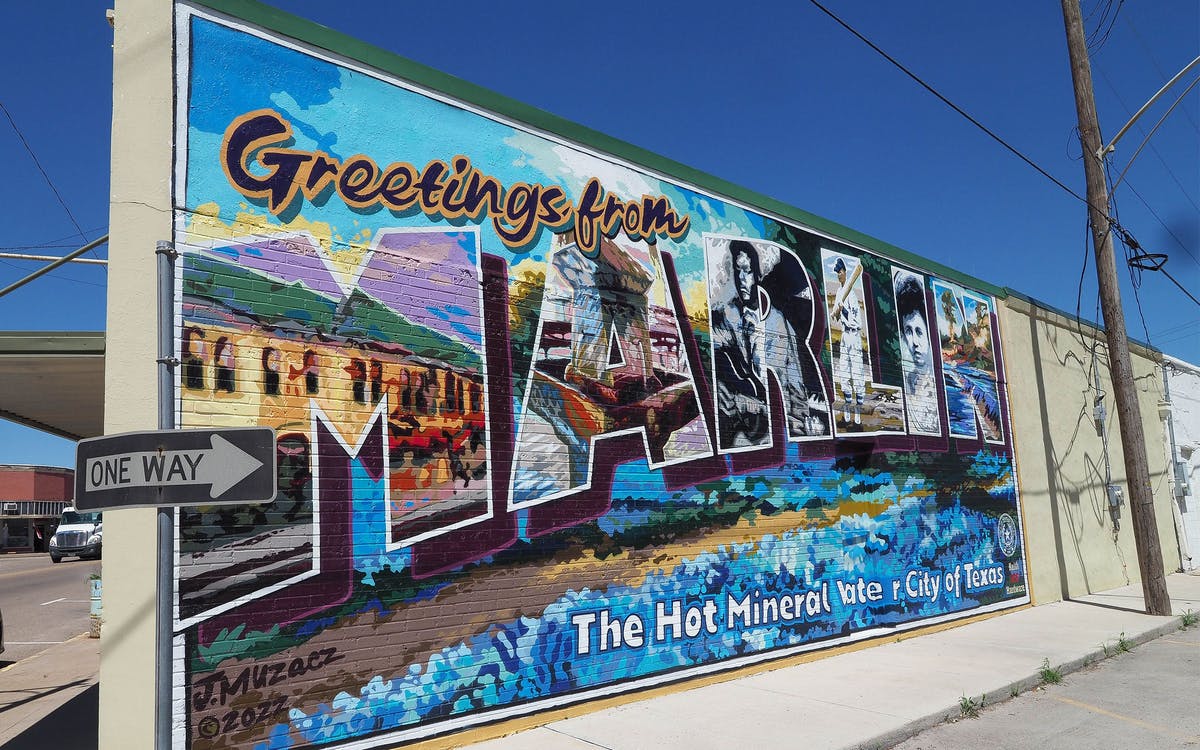 Texas Monthly’s Small-town Travel series explores the culture and history of destinations off the beaten path, offering advice on where to stay, eat, and sightsee.

More than a century ago, the hot water that pours from a fountain beneath an aging downtown pavilion put Marlin on the map. “It smells like boiled eggs and tastes like tears,” says Bryan LeMeilleur, the director of tourism for Marlin, a town of 5,600 about 25 miles southeast of Waco. He holds a shot glass bearing the city’s name beneath the free-flowing spigot on Coleman Street, next to the Marlin Chamber of Commerce.

County crews drilling for water discovered the hot spring in 1892, and it took a while for residents to get over the sulfurous smell that wafted out. But when a stranger took a dip in a barrel full of the odiferous water, his skin ailments and blood disease vanished, according to local lore.

Word got out. In the early 1900s, Marlin earned a reputation as a center for healthy living. A sample of the water was sent for analysis, and the report showed it was mineral-rich. The Bethesda Bathhouse, Imperial Hotel, Majestic Bathhouse, and Torbett Hospital all opened, and a public fountain was installed. Conrad Hilton constructed his eighth hotel, the Falls, across the street from one of the bathhouses and dug a tunnel between them to ease access for guests.

Tales of the healing waters rippled all the way into the world of professional baseball. Between 1904 and 1918, at least four professional baseball teams came to Marlin for spring training, and to ease their sore muscles in the city’s hot mineral water. Some, like the Chicago White Sox, the St. Louis Cardinals, and the Cincinnati Reds, came for just a season or two. But the New York Giants, under manager John McGraw, returned every season from 1908 until 1918. “Drink it. Best stuff on earth,” a groundskeeper said in a 1908 article in the Marlin Democrat.

By the 1930s, about 80,000 people a year were visiting Marlin annually. Many came to soak or seek medical treatment, and an entire industry emerged around health and wellness. “Taking the waters” for one’s health was trendy during this era, perhaps akin to going for spa treatments or massages today; a similar scene flourished in the North Texas town of Mineral Wells. In Marlin, polio and arthritis patients bathed in the hot mineral water. An infirmary, a drugstore, and a clinic for children with disabilities all opened. By the latter half of the 1930s, the miracle water industry began to fade away, in part because scientists were developing new antibiotics, including penicillin.

If you decide to take a sip of Marlin’s mineral water today, brace yourself. The sulfur-rich liquid tastes saltier than a bucket of movie theater popcorn. That’s why some visitors opt to turn on the faucet in the adjacent public foot bath and soak their toes instead. “People pull up here and fill up five-gallon jugs,” LeMeilleur says of the fountain, where anyone can fill a container for free. “Some people drink it; some people wet a rag and wipe it on [their skin] at night.”

Although the city’s reputation as a health center faded—even the Veterans Administration Hospital, which opened in 1950, had closed its doors by 2005—some see tourism potential in the community. Marlin’s population peaked at about 7,000 in 1950, according to the World Population Review, and hovers around 5,500 today, with an average household income of $25,355. “There’s a lot of Marlin that’s really hidden and prime for resurgence,” LeMeilleur says.

The Texas Film Commission recently certified the city as a film-friendly community, a designation that teaches municipalities best practices when it comes to luring in film crews. (So far, the city’s movie résumé includes a few days of filming for the 2006 film about Truman Capote, Infamous, and the 1976 flick Leadbelly.) A new mural painted on the side of a building at the intersection of Live Oak and Heritage Row depicts Marlin’s history as the self-proclaimed Hot Mineral Water City of Texas.

Marlin is the county seat of Falls County, and officials unveiled a $7 million renovation of the county courthouse last October. The art moderne structure, more austere than traditional 1930s art deco, features a three-story central tower; inside you’ll find seafoam-green walls, three-color marble floors, and a courtroom straight out of My Cousin Vinny. It’s worth stopping for twenty minutes to explore on your own.

Down the road at 133 Heritage Row, the Palace Theatre hosts a dinner theater production each May and October. Since the theater opened in 1925, it has hosted vaudeville acts, movies, concerts, and recitals. This summer’s schedule includes a Tribute to Elvis on August 13. It’s also home to Paranormal University, where several times a year students can get hands-on training using dowsing rods, thermal cameras, and other high-tech gear to root out the ghosts that allegedly occupy the premises. The next session, which costs $35, is scheduled for July 30. If you go, be sure to check out the basement, where reports of paranormal activity are most common.

Just poking around in the old building turns up fascinating (and sometimes troubling) history. There’s a dingy old staircase in one corner that Black patrons once had to use to reach their designated seats in the balcony. An old candy machine is tucked in one corner, and an original stage curtain, with ads for the local cotton gin and general store, hangs from one wall. The chairs around the dining tables are refurbished old theater seats, mounted on wooden platforms. And Bonnie and Clyde reportedly hid out for a few nights in a small upstairs apartment attached to the theater.

A few blocks away, ten tall columns adorn the front of the Allen House, a Greek revival home built by Dr. Walter Hanz Allen and his wife, Nettie, in 1911. Today a nonprofit board maintains the facility and rents it out for special events. Inside you’ll find yellow leaded glass windows, a creaky old out-of-commission elevator, vintage dinnerware and artwork, and beautiful wood floors. Tours are available by request.

Take a spin through the Wagon Rib & Wing Drive Thru, at 4969 Texas Highway 7, where retired city councilman Scottie Henderson and his wife, Mary, sell deep-fried ribs and chicken wings. Henderson is a fixture here. Born and raised in Marlin, he drove a bus and taught vocational education at the high school while flipping burgers on the side. When he introduced his version of ribs—half-dollar-size bits of beef rib with a little meat, battered and sizzled in a vat of oil—people began lining up. “People started eating those ribs and they’d eat them until I ran out,” he says now, as he hands a bag of the bite-size chunks to truck driver Troy Crane of Longview, who is making his first visit. A few minutes later, a regular customer gets out to chat. “It’s different. It’s original,” says Corey Henderson of Marlin. “You can’t get this taste anywhere else—it’s like a popcorn chicken pork chop.”

For more traditional barbecue, try Whup’s Boomerang Bar-B-Q, also a drive-through, famous for its ribs, brisket, and sausage. The place opened in 2000, and made Texas Monthly’s list of top fifty barbecue joints in 2013.

Downtown, the new 1912 Coffee and Bites opened in the bottom floor of the Peacock Building in February. Owner Sabrina Tarbutton (who lives upstairs with her husband) serves baked goods and breakfast items—cinnamon rolls, pies, quiches, and cookies—all made without corn syrup. Jennifer Withey, of Hullabaloo Coffee, fresh-roasts all the coffee for the shop in small batches. The walls are hung with local artwork.

“My goal is to show people there’s a better option [than using unhealthy ingredients],” Tarbutton says. “And to be a community resource. My take on Marlin is that it’s full of fantastic people and it’s been sort of overlooked for a long time.”

Even if you’re not in the market for a hammer and nails, the Keith Ace Hardware Store at 122 Live Oak is worth a stop, if just to see the hand-cranked, counter-weighted elevator in the back. This old building has always served as the local hardware store, although the name has changed. The elevator once raised and lowered the horse-drawn carriages that were manufactured on the second floor, and it’s still used to move stock up and down.

The days of luxury hotels in Marlin are long gone, and the once glamorous Falls Hotel has been abandoned, although a piano still stands in the front room. If you want to visit Marlin today, your best bet is the Best Western Executive Inn & Suites at 100 FM 147. Or stay in a rental home, such as the Carriage House Apartment at Three Oaks in town or the Post Oak Lodge in Lott, eleven miles away.