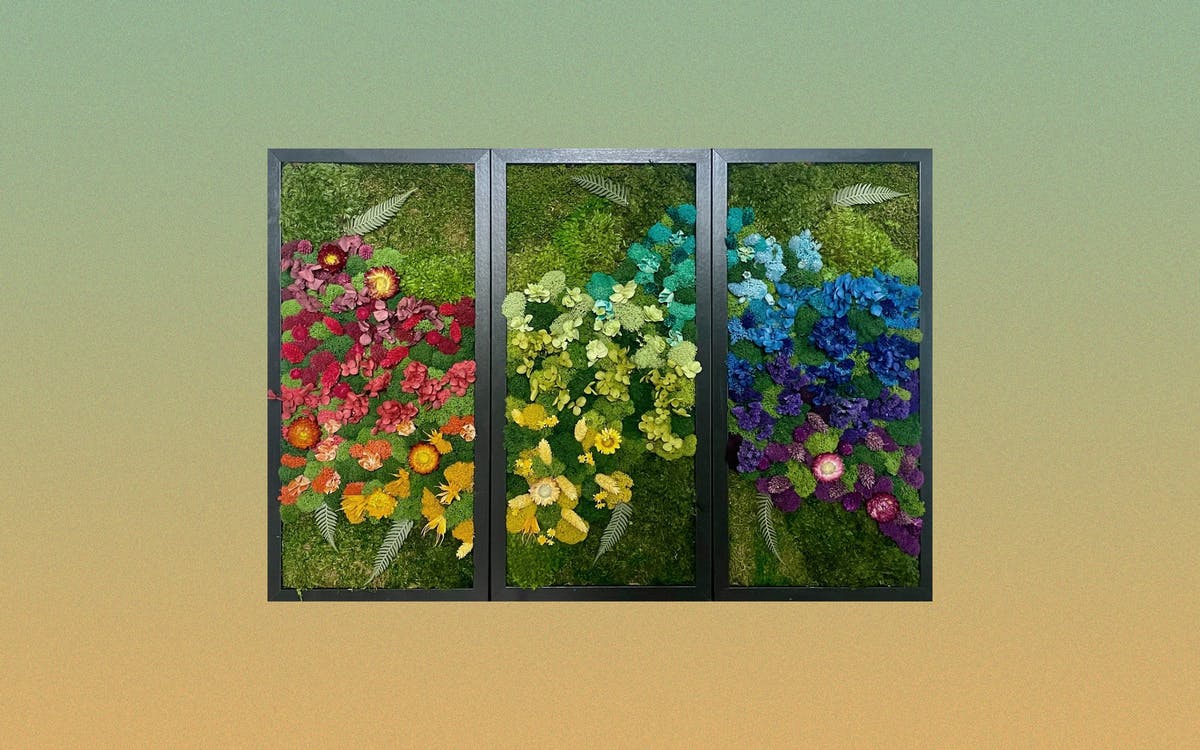 Interior designer Jaclyn King spent years hiding the tacky labels and neon-colored wax of mass-produced candles inside vintage jars and vases she found at flea markets and estate sales. Then it dawned on her: she could combine her love of antiques and her design eye to create upcycled candles that looked good, smelled good, and did good by helping to reduce landfill waste.

Working from her backyard studio in Dallas, King now gives those same forgotten relics—everything from Depression-era candy dishes to British biscuit tins—a new purpose through her Old Flame Candle Co. Each candle comes with a name and a story. There’s Maria, a four-wick beauty in a brass container from the seventies that King thrifted at the Canton Flea Market. Myrtle uses a decade-younger swan-shaped porcelain planter. Emilia, an Italian glass stunner, is described as a femme fatale: “We cannot and we will not stop drooling over this mid-century mamma. That hourglass figure and layered cased glass in milky peacock teal put her on a pedestal and she’s never coming down.”

But it’s not just about a pretty face. Whereas some candles contain animal fat, Old Flame pieces are made with a vegan blend of apricot and coconut wax. The wood wicks are devoid of pesticides and certified by the Forest Stewardship Council, meaning they come from a responsibly managed forest. When the candle finally burns out, King encourages customers to use the vessel as decor or send it back to be refilled at a discounted rate.

Old Flame Candle Co. is but one of many eco-friendly businesses popping up across Texas and is indicative of the Lone Star State’s increasing commitment to sustainability. While consumers may not be able to directly contribute to regenerative ranching or zero-emissions electricity, supporting these small businesses is a way to get involved on a smaller scale. Below, find five more homegrown businesses to support.

The U.S.S. Texas, a Navy battleship launched in 1912, witnessed two world wars before being decommissioned in 1948. It’s the first U.S. battleship to become a permanent museum—and it was also the first ship to supply materials for Percy Richardson’s line of one-of-a-kind knives.

In Lufkin, two hours from where the U.S.S. Texas is docked, Richardson crafts blades using steel from the ship’s engine brace, acquired through the Texas Parks and Wildlife Department, which oversees the museum. Richardson used to work for the department and asked for the discarded steel after the museum underwent renovations. He’s since collected metal from anchor chains and hulls of other battleships, as well as teak and pine from ship decks that he uses for knife handles. The process can take weeks, if not months, depending on the level of customization, but clients don’t seem to mind waiting for a piece of history. One customer, former president George H.W. Bush, had a knife made out of steel from the U.S.S. San Jacinto, the aircraft carrier he had served on.

Richardson, who served in the U.S. Air Force, comes from a long line of veterans and sets aside $10 from every knife sold for the Wounded Warrior Project. He also has donated more than $40,000 to help keep the U.S.S. Texas and other ship museums afloat for years to come.

Demi Mixon was in grad school studying geology when she taught herself to knit. Then she got hooked on macramé. Mixon now uses ancient Chinese techniques to create “transportive multi-media fiber art” that mimics patterns she once studied in the natural world. Sometimes the wall hangings, or “soft sculptures,” as she calls them, double as a canvas for landscape paintings that Mixon also does by hand. Her larger pieces are priced in the thousands, but smaller items such as wall planters go for around $200. The planters are a way of using up leftover “fluff and cuttings from the larger pieces,” Mixon says. Bonus: all works come packaged in repurposed or recycled materials.

Leave it to moms to tackle multiple problems at once: in this case, fast fashion, textile waste, and the financial burden that comes with trying to outfit constantly growing kiddos. When childhood friends Nicole Boynton and Kara Livingston had children of their own, they often swapped hand-me-downs, but they learned through followers of their popular mom blog that others weren’t so lucky.

Enter Hand Me Up, their San Antonio–based start-up that works to keep textiles out of landfills through a kids’ capsule wardrobe service. Here’s how it works: Parents fill out a short questionnaire on needs and sizing. Then, for $30 to $40, a package—containing three tops, three bottoms, and one bonus item such as a fun sweater or holiday PJs—is delivered to their door. The bag can be refilled with clothes kids have outgrown and sent back using a prepaid shipping label. The shipper gets $10 off the next order and Livingston and Boynton redistribute the items to other families. Anything that’s been loved beyond repair is salvaged for parts and used to create baby bibs, hair bows, and stuffed animals.

You don’t need a green thumb to enjoy these vibrant moss arrangements made to order in the capital. Whereas fresh flowers have a short shelf life (and often a large carbon footprint, depending on where they’re sourced), Mosstique’s creations are permanently preserved and require minimal upkeep. Large-scale panels consisting of moss, dried bark, and fern leaves bring the outdoors in and cultivate a sense of calm, but you can also opt for vivid color with feathers, pressed flowers, or creations themed around a specific hue.

Peace Out Plastic, an Austin-based small business focused on eliminating plastic waste, started with straws, selling a stainless steel alternative. Owner Michelle Tran has since expanded her product line to include three-ply reusable cloth towels and bowl covers that replace plastic wrap. Both are reversible, machine washable, and available in a variety of colors and patterns. “I aim to bring a ‘POP’ of fun into everyday homes,” Tran says, adding that many of the fabrics she chooses are inspired by her love of the store Anthropologie. Tran donates 1 percent of proceeds to the Plastic Pollution Coalition.