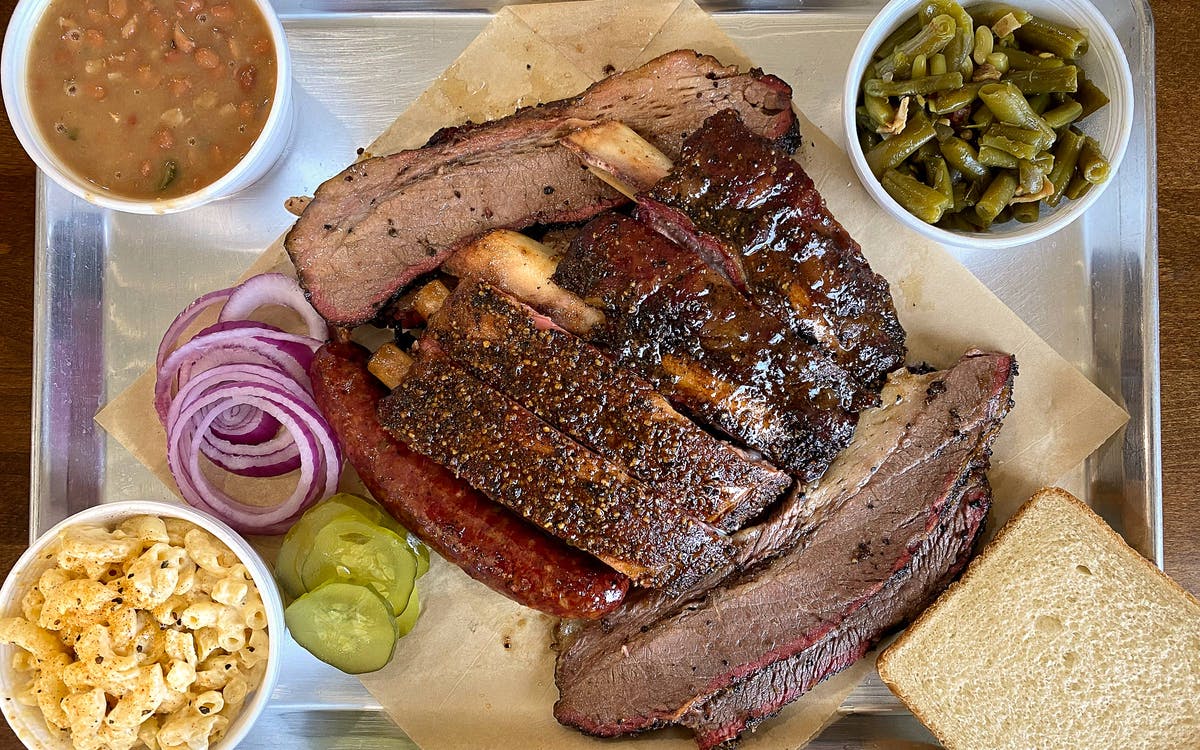 The Permian Basin is the land of oil and cattle, and in 2019, one man from each industry came together to open Midland’s newest barbecue joint. Midland native Aaron Lesley has worked in the oil fields for most of his life, but he spends his weekends traveling Texas and the rest of the country as an award-winning competition-barbecue pitmaster. John Scharbauer is a fifth-generation cattle rancher from the famous Scharbauer Ranch, which dates back to 1883. When he decided to open a barbecue joint to highlight the beef from the butcher case at his Midland Meat Company, he brought on Lesley as his pitmaster. Together, they started the Half Acre.

Aaron Lesley doesn’t remember much about the barbecue joints in Midland when he was growing up. “As a kid, times were tough, so we didn’t eat out,” he said. But he remembers his grandfather’s barbecue fondly. When he wasn’t working on oil-drilling rigs, Lesley used those lessons from his grandfather to start a small barbecue catering business on the side. He began entering barbecue competitions, and he found success in the brisket category when he started using locally raised beef from Scharbauer’s market.

Scharbauer’s family had raised cattle for a century, but it hadn’t entered the retail beef business until Scharbauer opened the meat market in 2015. From day one, the beef in the coolers has come from the family ranch. Hereford, Angus, and a cross of both are all available, depending on the season.

After a year of running barbecue pop-ups behind the meat market, Lesley quit his job as a drilling superintendent for Apache and came on as the Half Acre’s pitmaster. Now business is booming at Midland’s best barbecue joint.

The plan was to use only Scharbauer Ranch beef, but there are just two briskets per animal, and Midland Meat processes only 25 head of cattle each week. After all the competition pitmasters get their weekly briskets (the meat market currently sponsors five, but several other competition cooks use its brisket) and the market sells a few to customers, there is no longer enough brisket to meet demand at the Half Acre. Scharbauer told me last week that he’d begin supplementing with 1885 briskets, but every other bit of beef served at the restaurant is from Scharbauer Ranch.

That includes all the chopped beef, which isn’t brisket at all. Lesley smokes a combination of top blade, shoulder clod, and chuck roll for the chopped beef. Massive beef short ribs are a rotating special (which I sadly missed), but beef back ribs are on the daily menu. Back ribs, which come off the prime rib, are usually shaved right down to the top of the bone. But since the Half Acre has its own meat cutters, the back ribs come with plenty of meat left on. Lesley smokes them until tender, then brushes on some Brandin’ Oil barbecue sauce from his Texas Oil Dust line of seasonings and spices. It gives a sweet finish to the peppery ribs, which are juicy and tender.

The same sauce goes on the pork ribs, which were equally tender. Lesley slathers it on before the ribs are wrapped in foil to finish cooking. The bark suffered a bit, but the flavor was still great. Thankfully, there’s no sauce on the brisket. I was lucky enough to be there on a day when Lesley had briskets on the smoker from both the Hereford and Wagyu-cross breeds from Scharbauer Ranch. The fatty slices were buttery in flavor from the generous marbling. I understand why the restaurant had to switch away from serving Scharbauer Ranch brisket exclusively, but enjoying locally raised brisket at a Midland barbecue joint was one of the highlights of the meal.

Lesley smokes the briskets at around 250 degrees for the first eight hours in an Oyler rotisserie smoker (two Ole Hickory rotisseries are used for the other meats), then wraps them and cranks the temperature up to 300 to finish them off. It’s a serious departure from his competition cooking in a 400-degree offset smoker, where the injection-filled briskets are finished in six hours. Lesley says he’s always served low-and-slow briskets to the public, so he’s used to switching between the two methods.

The Half Acre’s sausages are made of trimmings from the Scharbauer Ranch cattle. The day I visited, the joint was serving smoked green chile sausage in plump, juicy links. It had a coarse grind and was well seasoned. I also tried the popular brisket egg rolls. “A lot of oil-field guys need a roadie,” Scharbauer said. He packs the rolls with cream cheese, cheddar, chopped brisket, onions, and jalapeños for a full meal inside an egg roll wrapper.

Lesley runs the pits, but in the kitchen, chef John Vandergrift comes up with the daily specials. His inspiration often comes from whatever cut isn’t selling at the meat market, so don’t expect to find smoked prime rib or tenderloin on the board—but that’s not a problem, thanks to Vandergrift’s creative eye. When I visited, smoked picanha was the star, and did it ever shine. The cut is from the sirloin and is popular in Brazil. At the Half Acre, they smoked it until tender (but not falling apart) and sliced it thin. The beef itself was incredible, and it was served it on a flatbread sandwich with queso blanco, pico de gallo, and grilled onions and jalapeños. I loved it so much the first time, I came back a day later for another. It was that good.

The sides are standard barbecue fare. The Half Acre serves good versions of slaw, potato salad, and pinto beans. The fried okra comes in frozen, and the green beans are from a can. I appreciate the creativity in the desserts: I tried a key lime parfait, which was a nice departure from banana pudding.

The Half Acre is a unique barbecue joint, given its connection to a legendary Midland cattle ranch and its meat market. The restaurant is able to showcase locally raised beef, often by featuring what isn’t selling well at Midland Meat Company. Likewise, when there’s too much barbecue left over at closing time, they chill it, seal it in Cryovac, and send it to the meat market to sell. It’s a symbolic relationship we don’t often see in Texas barbecue, and that was Scharbauer’s goal when he opened both businesses. Now he just needs to find a way to get more than two briskets out of every steer.

The Uvalde school shooting victims: What we know

At NRA convention after Uvalde, attendees describe a culture under siege