With Arbor Day on the way, neighbors plant 20 fruit and shade trees in a Southeast Side community garden – Chicago Tribune 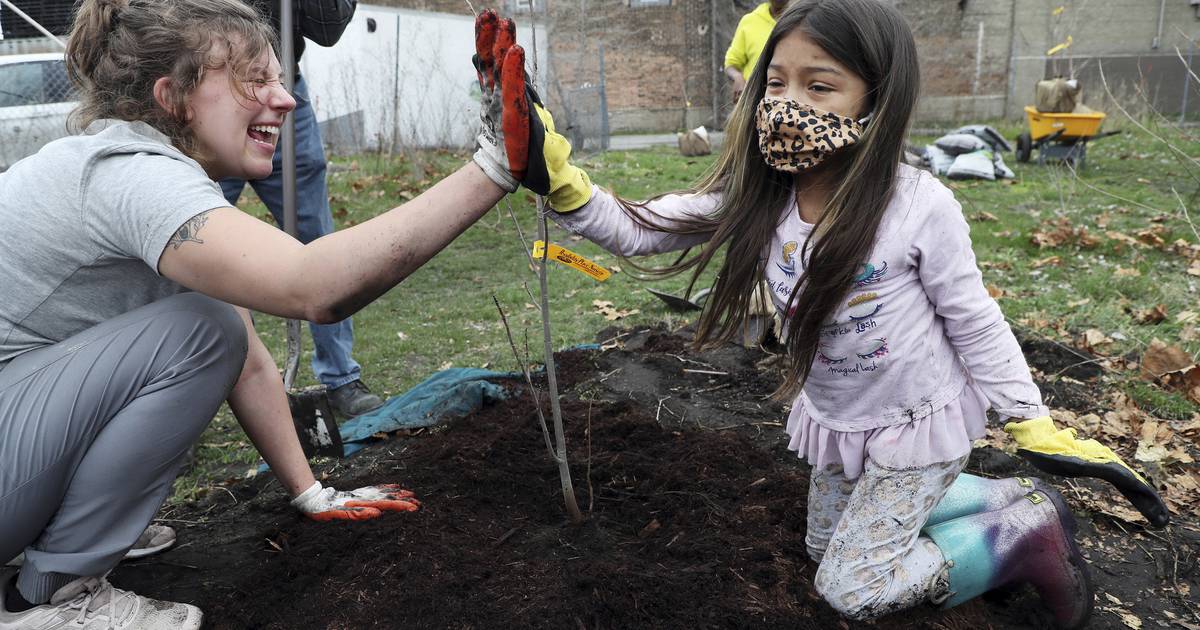 The trees were bare, the sky was gray and temperatures hovered in the 60s.

But grass underfoot was already emerald green at the Land, a community garden and outdoor space on the Southeast Side, and the crowd of 35 —children and older adults, lifelong gardeners and newbies, professional tree planters and neighborhood volunteers — was in high spirits.

Standing in a wide circle, they introduced themselves one by one to loud applause.

And then they got to work: planting 20 trees, including persimmon and white oak, Ohio buckeye and Kentucky coffeetree.

“I think it’s beautiful,” said Jim Murrell, 81, of the Pullman neighborhood, who attended with his wife, Lena. “People should be more sensitive to trees.”

Tree plantings such as the one at the Land earlier this month are on the rise, according to the Chicago Region Trees Initiative, a consortium that works to increase the regional tree canopy. This spring the consortium will participate in 16 tree plantings, each with 10 to 83 trees, according to Trinity Pierce, stewardship manager for the trees initiative. That compares with about 10 tree plantings during the entire first year of the COVID-19 pandemic.

“There’s this sincere and genuine need for connection” during the pandemic, Pierce said, and that extends to growing food and caring for plants. She’s seen more interest in fruit-bearing trees, community gardens and backyard improvements.

The interest comes at a time of growing awareness that the urban tree canopy contributes to human health and comfort, and that it’s unevenly distributed according to income and race.

[ A ‘postcard from the future,’ Oak Park building is one of three in the state to prove it creates as much energy as it uses ]

A 2021 analysis by the conservation organization American Forests found U.S. neighborhoods with a majority of people of color average 33% less tree canopy than majority-white communities. Neighborhoods with 90% or more of their residents living in poverty had 41% less tree canopy than communities with 10% or less of the population living in poverty.

The southeast section of the Calumet Heights neighborhood where the Land is located has 17% tree coverage, according to American Forests, which would like to see 48% tree coverage there. Ninety-four percent of residents are people of color.

Last summer neighbors and supporters came together to plant sunflowers and vegetables. There’s a big metal shed with a mural featuring flowers, trees and messages of goodwill. Long grasses and meandering paths give the oversized city lot an unplanned, natural look.

The Land organizers got in touch with the trees initiative through the nonprofit Arbor Day Foundation, which has partnered with Peanuts Worldwide (of Charlie Brown fame) to plant hundreds of thousands of trees around the globe through 2025.

The trees initiative provided the tree know-how, the Arbor Day Foundation and Peanuts Worldwide provided funding — as well as a very convincing Snoopy in full fuzzy white costume — and the Land provided the space, the vision and the knowledge of the community.

“I find that information exchange — that’s what’s so rewarding about this work,” said Pierce. “Yes, it’s about trees, but more so, the people who live with those trees and take care of them.”

In keeping with the Land’s focus on fresh food and permaculture — a form of sustainable agriculture — the trees initiative provided pawpaw, persimmon and serviceberry, all trees that produce edible fruit.

“Not a lot of people realize we have native, hardy tree species that do really well and produce delicious food,” Pierce said.

“That’s the other side of it: just spreading awareness about the wonderful trees we have that are going to do well — they’re not just going to survive, they’re going to thrive.”

The crowd at the planting included seasoned urban gardeners such as Lena Murrell, 78, who has two peach trees, an apple tree and a pear tree outside her home in the Pullman neighborhood, and Ray Glend, 74, of the Chatham neighborhood, who patiently explained the charm of the pawpaw fruit.

“It’s sweet and creamy with a lot of seeds,” said Glend. “It’s like a custard.”

[ 2 Illinois eagles died from lead poisoning in March, and toxic hunting ammunition is likely the culprit ]

The tree-planting itself was over fairly quickly, with individuals and small groups digging 3-foot-wide holes and arranging trees so they stood straight up, with the bark at their bases exposed to discourage unhealthy root growth.

Afterward, participants mingled, while children played or looked on curiously. Royal Robinson Jr. came with his wife, Nicole, and their children, Royal Robinson III, 8, and Rainah Robinson, 12. The Robinsons, who have a 10-acre family farm outside Hindsboro, Illinois, brought cartons of fresh eggs — brown, yellow and even pale blue — and offered them free to whoever wanted them.

Pura Verdad, a community organizer, brought four of her six children, ages 6 to 12, as well as hand-painted canvases promoting local environmental causes such as the fight to save the Bell Bowl Prairie in Rockford.

“This is a prime time to talk to people who love trees,” she said.

The crowd, which grew to over 40, posed for a group photo, then lingered under threatening skies.

The new trees stood in the background, some bare, some with last year’s brown leaves still dangling. But if you looked closely you could see new growth. The serviceberries, in particular, were already covered with dozens of mint-green buds, each holding the promise of spring’s white petals and summer’s red fruit.