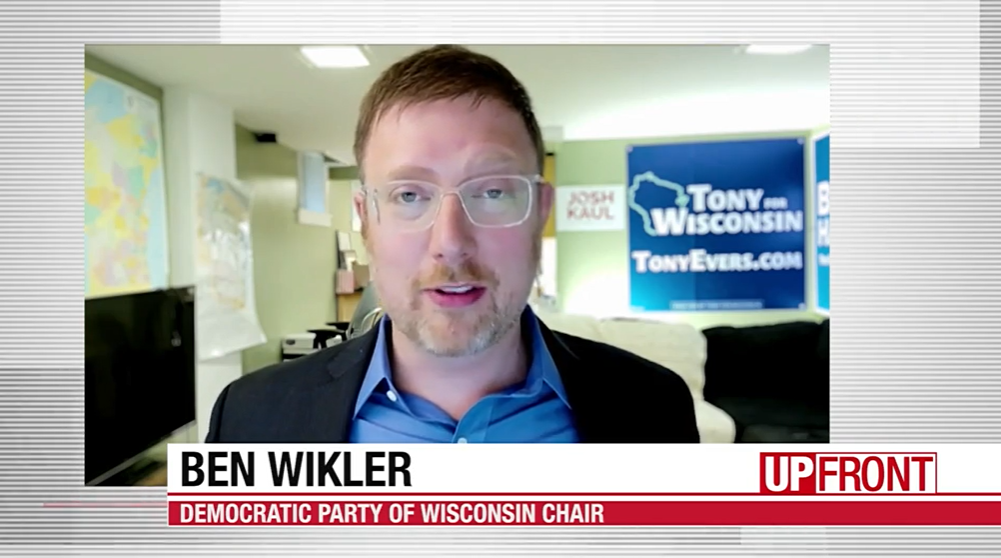 “It’s such a contrast from the kind of chaos and extremism and leap-frogging into the far right that we’ve seen from the Republicans and which was on display this weekend,” Wikler said on WISN’s “UpFront,” which is produced in partnership with WisPolitics.com. “The Democratic convention really demonstrates that the Democratic Party is the big tent, mainstream party in our state and the Republican convention unfortunately we’ve just seen how far right a lot of these candidates are willing to go.”

“The interesting thing about party conventions is that they showcase the way the parties actually speak to themselves, and at the Democratic convention you’re going to see candidates who are talking about how to bring costs down for people that are struggling with inflation,” Wikler said. “You’re going to see people talking about common sense issues, about how to expand health care and ensuring we don’t go back to 1849 with this extreme ban on access to abortion.”

Wikler acknowledged the tough statewide races ahead for governor and U.S. Senate.

“We have to prepare as though this is going to come down to a microscopic margin,” Wikler said.

— Milwaukee police Chief Jeffrey Norman says he’s open to any conversation or proposal “that will help make our community safer” after last weekend’s mass shooting in Milwaukee as officers begin enforcing a long-standing curfew in the city for anyone under the age of 17.

“We need to recognize how to approach it, how to approach it when you are bringing these juveniles home to their parents because the expectation is yes, we are going to enforce the curfew law, we’re going to enforce the parental responsibility,” Norman said. “But we don’t have to be unprofessional about it, to understand we want to create buy-in from the standpoint that we’re doing this for your own good. There’s nothing out here after these times that we have established that you should be part of.”

The fallout from last weekend’s mass shooting after the Milwaukee Bucks playoff game has prompted calls for change from all corners of the city.

“In that prior weekend we had a 15-year-old, a 16-year-old shot on a Friday night,” Norman said. “That’s unacceptable.”

The city’s Office of Violence Prevention has scheduled a community meeting Tuesday.

“I will always be part of the conversation in regards to what those efforts are because those are bigger than MPD or the Milwaukee Police Department,” Norman said. “You’re talking about collaboration between elected officials. You’re talking about the business community and being at the table to see what those solutions look like and being part of that conversation and seeing what that lift is. I know there’s a lot of things being thrown about, but we also want to know what is going to be the long-term sustainability of it and also who is supporting it.”

After intense lobbying, including from a group of Wisconsin restaurant owners, the U.S. Senate failed to advance legislation that would have provided some $40 billion in pandemic relief to the restaurant industry.

“At this point right now we just feel that’s kind of the end of the road,” said Melissa Buchholz, the owner of the Odd Duck restaurant in Milwaukee. “This is much-needed funding that was actually supported bipartisanly originally when it was funded.”

Buchholz was part of more than a dozen Wisconsin small business owners who were on Capitol Hill this past week, and part of the Main Street Alliance that met with Wisconsin’s delegation.

The National Restaurant Association and Independent Restaurant Coalition criticized the failure and predicted the lack of continued funding will force some restaurants to close.

“I do think you’re going to see a lot of restaurants, little mom and pop places will go first, places that don’t have access to other capital,” Buchholz said. “I think it’s getting more and more dire.”

A Milwaukee Common Council committee is expected to vote on a framework agreement Wednesday between the city and Republican National Committee, a move that is necessary but doesn’t guarantee Milwaukee will host the 2024 convention.

Milwaukee and Nashville are the two finalists.

A draft proposal circulating among council members outlines the city’s obligations on everything from public safety to parking and street closures.

The full common council could vote on the proposal June 1.