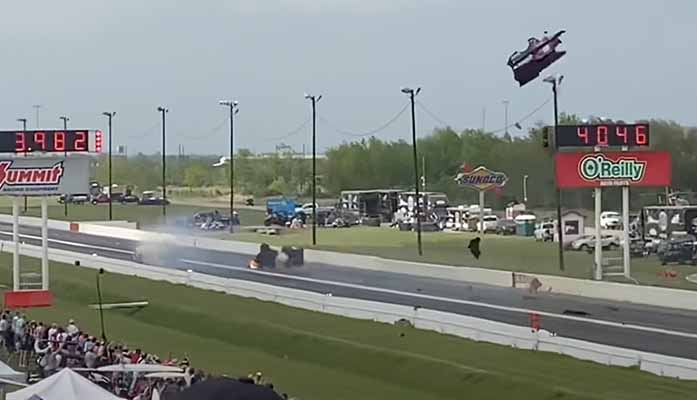 PHOENIX – The most shared image from the NHRA SpringNationals at Houston Raceway Park was not the winners with their trophies but an explosion that became viral, reaching more than 36,000 views combined on different YouTube videos.

It happened during the final race of the Funny Car category, in which Bobby Bode III, a business and entrepreneurship major at Arizona State, came short of winning his first major title in this sport, giving the victory to his rival, Matt Hagan.

“Yeah, so the car was going along great,” Bode III said about the April race. “I really didn’t feel like anything was going wrong in it. And then it happened so fast. And all of a sudden, there’s just a big, big concussion in the car. I was under the body one second, the second later, I wasn’t.”

As flames shot from the car, the body flew high in the air.

It was only a split second, so Bode, 20, felt safe, but his team director, who is also his dad, did not. 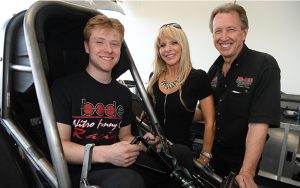 “I gotta say that moment, I was just shuttered. I stood there and didn’t move for a while, waiting just to make sure that he got out of the car,” Bob Bode said. “Once he got out of the car, it was all good. But I had probably 30 seconds where I was scared to death because those things are very safe, and if everything works the way it’s supposed to, it’s safer than driving your car down the street, but when they explode like that, things can go really wrong.”

The most heartbreaking thing for Bode III was not that the car exploded, but that it occurred during the final when he was leading the race.

Afterward, Bode III got of his car and threw his gloves down in frustration.

In Funny Car drag racing, the objective is to run half a mile against another competitor, and try to arrive at the finish line before your rival, a competition similar to the racing made popular in the original movie of the Fast & Furious franchise.

However, funny cars are not typical cars. They have a chassis, which holds both the driver and the motor, and then an outer shell called the body. That shell often resembles the models of other popular cars.

Another key feature of these vehicles is speed. Funny cars can reach up to 330 miles per hour, which is why, as a security measure, they also have two small parachutes installed on the back, so when they cross the finish line, they work as another breaking device, which are very visible in the video of Bobby’s car explosion.

Although he is the youngest driver in the NHRA National Hot Rod Association, Bode III has been around funny car racing all his life. The one who introduced him to this world was his dad, who used to race and who ultimately helped him compete, since he bought the current car Bobby races, and worked on it for a year.

“My dad raced funny cars for 20 years, and so I was just around it as a little kid,” Bode III said. “And I started going to all of his races, then I started racing junior dragsters at the age of 8. And I did that from 8 to 16 and then I did some other stuff like Super Comp (drag racing) and then I went to Funny Car at the age of 18 and I was just around as a little kid and I really liked it so it was just something I wanted to stick with.”

That he’s been around the sport for such a long time is also one of the reasons Bode III has had a successful career despite his age, said his car chief, John Fiorita.

“Obviously, he’s been around it since he was born,” he said. “For someone who’s not at the level Bobby is, it would be very difficult. He didn’t struggle, he absorbed everything that was being said, he took it, he was calm, cool and collected when anything came around.

Respect is key for someone that young.

“Early on, when he would say stuff, some of the guys would question it, you know, come to me and ask me if I wanted to do what he was saying,” the elder Bode said. “And now half the time they go straight to him. And the other half the time, they don’t come to me, because they’re not questioning and so he’s earned their respect.”

Bode III’ competes again Friday through Sunday at the Summit Racing Equipment NHRA Nationals, at Norwalk, Ohio, where he will try to shake off the accident and win his first tournament.