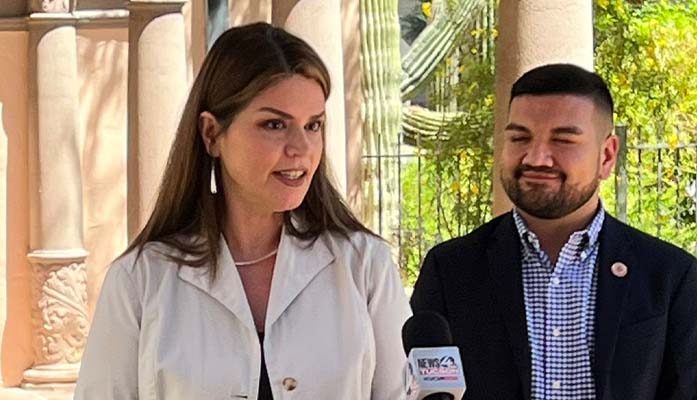 Despite the fact that he won the most votes in the Republic Primary in Pima County, Tucson Mayor Regina Romero says senatorial candidate Blake Masters does not represent the values of Tucsonans.

Romero, the leader of the fifth poorest metropolitan area in the nation with one of the highest crime rates, blasted Masters on Friday, claiming that he holds extremist views.

Romero, as expected, had high praise for her own candidate, Sen. Mark Kelly.

“Regina Romero has made Tucson (my hometown) virtually unrecognizable — violent crime has gone through the roof, our businesses are flooded with drug-addled vagrants, and the schools have gone down the drain,” said the native Tucsonan Masters in a press release. “I am tired of Low IQ activist Democrats like Mayor Romero running our cities into the ground. She should spend less time parroting the Party line, and more time filling potholes.”

Romero and her husband Ruben Reyes, District Director for Congressman Raul Grijalva, are key driving forces behind what has become known as the Grijalva Machine. Romero is counted on to stump for Democratic Party nominees, especially this year with Democrats expecting to lose power in the mid-term election. Kelly is seen as a vulnerable candidate.

Last week, Romero called for “all hands on deck” in a tweet:

EVERY VOTE MATTERS!
EVERY SEAT MATTERS! 🗳

Congratulations to these amazing leaders! We celebrate for now but we gear up for November for this important election!
ALL HANDS ON DECK pic.twitter.com/luR8n9tChV

Romero’s statement about Masters appear to be based on the reporting of Dillon Rosenblatt, with States Newsroom’s Arizona Mirror.

As previously reported in the Arizona Daily Independent:

Masters called for Rosenblatt to be fired after the reporter suggested in a May 6 article that Masters had somehow praised Nazi leader Hermann Goering in 2006 by quoting Goering’s thoughts on the subject of government propaganda.

But it was not only the Nazi reference with which Masters took issue. In the article, Rosenblatt also inaccurately described Masters’ position on contraception, which led to dozens of media outlets across the country reporting that Masters wanted to ban access to contraception.

Rosenblatt’s reporting was based on his apparent assumption that because Masters disagreed with a 1965 court decision in a case about reproductive rights then he must also oppose the underlying subject of the case – access to contraception. One headline even incorrectly stated Masters was advocating for a nationwide ban of condoms.

Later, Masters shared Rosenblatt’s racist and misogynist comments on Twitter from 2011 and 2012, which resulted in Rosenblatt’s firing.