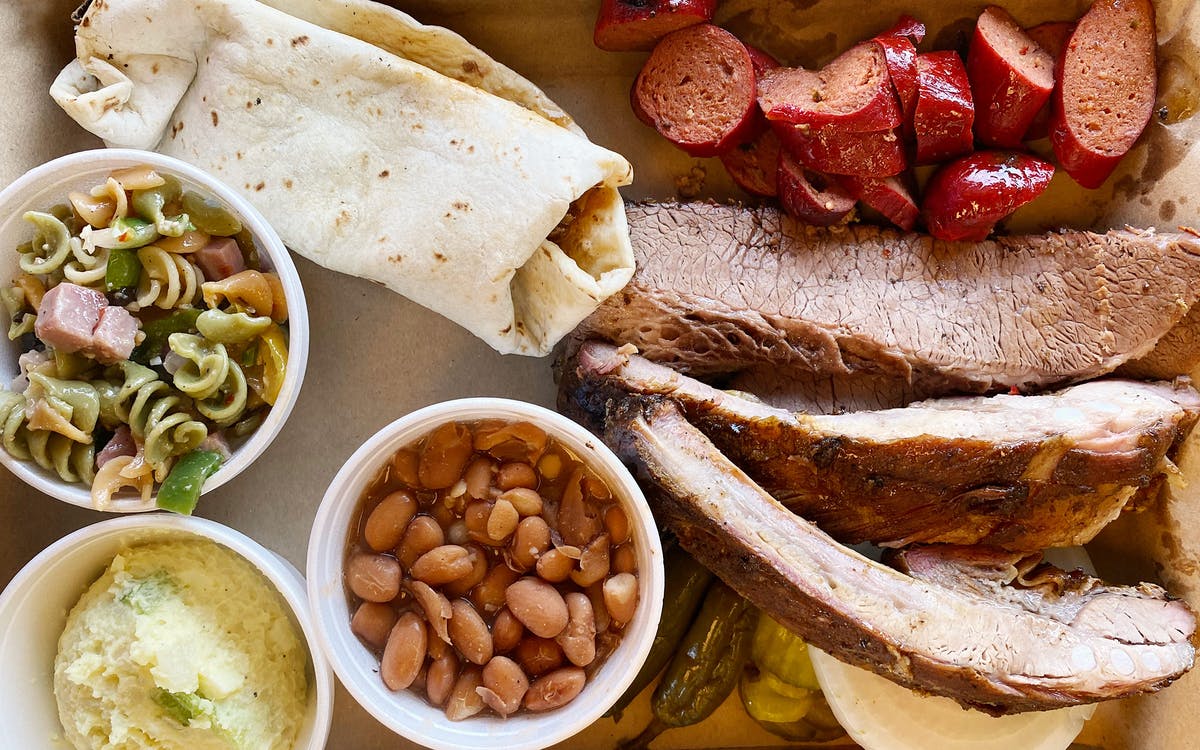 The barbecue from one’s hometown has a special charm. About twenty years ago, shortly after I’d moved to Dallas, my friend Lindsay packed a cooler with Jack Jordan’s Bar-B-Que from her native Odessa and flew with it to Dallas. She knew my love for barbecue and wanted me to try it. Her thoughtfulness alone made it one of my favorite Texas barbecue memories. It also shows the loyalty you develop to the barbecue you grew up on. This month, Jack Jordan’s Bar-B-Que reached a new milestone: it has served those loyal fans for seventy years.

Clarence Howard “Jack” Jordan left Fort Worth for Odessa with his wife, Karma, in 1946. He played bass fiddle with Cecil Brower’s Western band, and Brower wanted to find a new audience in West Texas. The band played gigs all over the region and had a daily radio spot on KECK. Brower had gained fame as a member of the famous Western swing band organized by Texas governor Pappy O’Daniel, the Light Crust Doughboys, and left Odessa after a few years to form a new band in Tulsa. Jordan and the others stayed in Odessa and renamed themselves Andy Schroder and His Western Band, but Jordan went searching for a new career shortly after. “He was sick of the night life,” his son Jimmy Jordan told me. (Jack Jordan died in 2009.)

Jimmy said his dad’s first restaurant opened on April 6, 1952. According to reports from a few newspapers at the time, Jack Jordan first owned the Sands Drive-in restaurant on Kermit Highway, north of downtown Odessa. It served fried chicken, shrimp, steaks, and barbecue “prepared in our own fine pit,” according to an ad in the Odessa American. Jordan constructed a new building catty-corner from the Sands in 1954, and Jack Jordan’s Bar-B-Que opened there on the founder’s thirty-seventh birthday. Jimmy, who runs the restaurant now, has a photo on the wall showing his father smiling mightily, sitting at a booth inside his new restaurant and cutting into a celebratory cake.

To provide an idea of what is was like in Odessa at the time the restaurant opened, Jimmy shared a story his father told him about the circus coming to town back then. “They’d unload all the animals and parade them down Grant Avenue, which was a dirt road, to the [Ector County] Coliseum,” he said. Everyone in town would line the streets to watch.

The new barbecue joint in town was popular, and Jordan quickly gained a reputation as a good restaurateur. He became president of the Permian Basin chapter of the Texas Restaurant Association. After attending a restaurant convention in Chicago, Jordan returned to his new home to find a banner hung in jest on his lawn by some friends. The banner read: “Who’da thought it? Barbecue and cole slaw bought it.”

Slaw is still a big seller at Jack Jordan’s Bar-B-Que, but the potato salad recipe is older. Jimmy’s uncle developed it when he was an Army cook during World War II. When I visited Jack Jordan’s recently, Jimmy insisted I try it. Not too smooth and not too chunky, this version is mixed with mayo, mustard, spices, and some chopped green onions. It’s as classic as the simply seasoned pinto beans. Jimmy said brisket, sausage, ribs, potato salad, and beans is still the most popular order at the restaurant, but he’s not afraid to try new items. The Italian pasta salad I had with my meal had just been added the week prior. Jimmy uses Prime-grade beef from Goodstock for the brisket and, along with all the other meats, it’s seasoned with the rub developed by Jack Jordan when he first opened the restaurant.

Jimmy still uses hickory wood like his father, but his comes in pellet form to fuel the Cookshack smokers he prefers. Jimmy said he witnessed too many pit fires in the old days to continue using the old steel smokers after he bought his father out in 1987. By then, they had already sold the original building. Jimmy opened a second location on the west side for a while, but they’re now settled into the building they moved into in 2003.

I asked Jimmy when he got into the business. “I’ve never done anything else,” he said, noting that he was raised in the restaurant’s kitchen. He rode his bicycle from school to the restaurant hoping he could pick up a shift rather than finish his homework. “I dropped out of school two weeks after my seventeenth birthday and went to work for my dad,” Jimmy told me.

Running a barbecue joint is a challenge anywhere, but keeping one going in through all the booms and busts residents experience in the oil fields that surround Odessa is especially difficult. “Our whole economy here in Odessa is volatile,” Jimmy said. And even now, when oil is up and the customers are plentiful, meat prices make it hard. “I’m busy,” he said. “I just can’t make any money.” That explains his reluctance to put his 22-year-old son, Logan, on a track to take over the business. “I’ve encouraged him to try to find a better way to make a living,” Jimmy explained, but Logan enjoys the restaurant life. For now, Jimmy lives by his father’s “open and hoping” motto, which means that as a restaurant owner, Jimmy can only “open the doors and hope people come in.” If it’s been doing it for seventy years, who’s to say Jack Jordan’s Bar-B-Que won’t be doing it for seventy more.