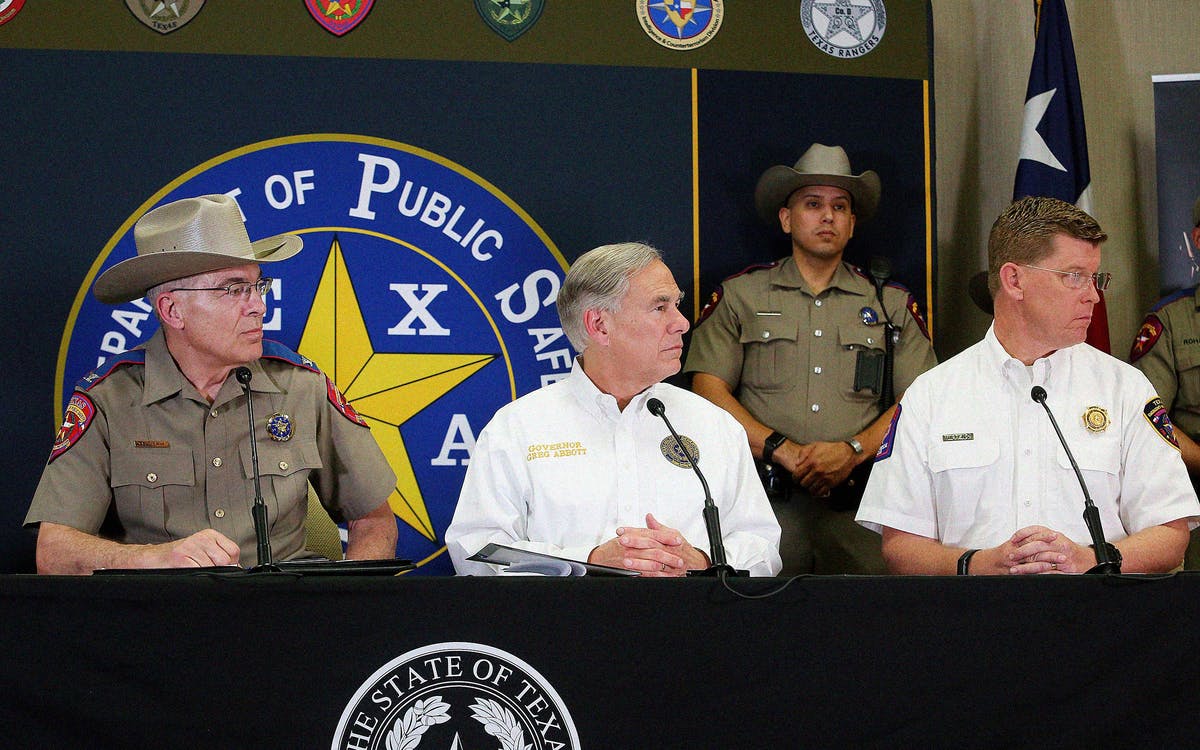 When the bus full of asylum-seekers from Texas arrived in the nation’s capital on Wednesday, it came to a stop right in front of Fox News’s Washington bureau. It was the exact PR setting Governor Greg Abbott might have imagined when he announced last week that, in protest of the Biden administration’s immigration policy, he would transport to D.C. any migrants who wanted to go there, among those who turned themselves over to the Border Patrol in Texas. The group of about thirty asylum-seekers—from Colombia, Cuba, Nicaragua, and Venezuela—filed out of the bus, surely tired from their thirty-hour journey, as Fox journalists tweeted about the scene.

Abbott has spent much of the past two weeks protesting the Biden administration’s upcoming rollback of Title 42, a provision in the public health code. Both the Trump and Biden administrations have used the obscure federal statute during the pandemic to expel millions of migrants without a deportation trial or the due process that they would otherwise be entitled to under U.S. asylum law. Last week, the governor announced that the Texas Department of Public Safety would conduct “enhanced security inspections” of all vehicles at the border—a move that has slowed incoming traffic from Mexico to a near standstill at some crossings, clogging a critical link in the supply chain for everything from produce to auto components bound for Texas factories. He also announced that he will send as many as nine hundred buses of migrants to the nation’s capital. Abbott, who did not respond to Texas Monthly‘s request for an interview, defended his plan in a statement released Wednesday, saying, “Texas should not have to bear the burden of the Biden Administration’s failure to secure our border.”

Perhaps ironically, Abbott’s move to protest the Biden administration’s policies toward asylum-seekers means that Texas is giving them one of the warmest welcomes they have ever been offered. When announcing the plan, Abbott had implied that the busing to D.C. would be compulsory, but his office quickly clarified that the bus trips would be strictly voluntary after some lawyers noted that transporting migrants against their will could qualify as felony kidnapping. The clarified busing policy, seemingly envisioned as punitive to both migrants and D.C. residents, has instead been embraced by both groups.

When asylum-seekers present themselves to U.S. Customs and Border Protection pleading for refuge, CBP first directs them to take a “credible fear” interview—a specialized questionnaire administered by immigration officials to determine whether an asylum claim is frivolous or is motivated by a plausible threat of persecution in the applicant’s home country. If a migrant passes, agents might choose to parole him or her directly into the country with a court date for an asylum trial, where a judge will make a final ruling on whether he or she can stay in the U.S.

Asylum-seekers’ trial locations are usually based on the region where they settle as they await the hearings—which could make the prospect of an expenses-paid bus trip out of Texas to D.C. appealing. Asylum judges in districts around the nation’s capital tend to grant refuge more readily than do judges in most of Texas’s thirteen immigration courts. In the Houston court, for instance, some judges denied 100 percent of asylum claims in 2021; a judge in El Paso denied 99 percent. By contrast, in a Baltimore court, where D.C. asylum seekers often appear, one judge denied just 10 percent of claims last year.

The capital is also a more welcoming locale for migrants in other ways. D.C.’s mayor has affirmed the city’s status as a “sanctuary,” and a bevy of nongovernmental organizations and private citizens in the capital stand ready and eager to aid the migrants. Furthermore, immigration experts say most asylum-seekers arriving in the U.S. already have family living here, and many, especially Guatemalans, Hondurans, and Salvadorans, might try to reach D.C., where there’s a large Central American population. Even those trying to reunite with family in New York or elsewhere on the East Coast might happily accept Abbott’s offer to bus them most of the way, a trip that otherwise would cost them around $350.

Over the years along the U.S.-Mexico border, I’ve met dozens of asylum-seekers released by CBP with immigration court dates—and many of them were desperate for the sort of helping hand Abbott is currently offering. Last year, when a group of thousands of Haitians seeking asylum arrived in Del Rio, a Southwest Texas border city, immigration agents quickly expelled the vast majority back to Haiti under Title 42. But some of the most vulnerable asylum-seekers—young children, pregnant women, those with serious disabilities—were paroled into the U.S. Normally, CBP drops parolees off at the nonprofit shelters that have sprung up along the border to help house asylum-seekers. But the shelters in Del Rio were full. At a gas station, I met a group of Haitians who had instead been dropped off on a nearby corner. Some lay on the concrete, looking tired and dazed. When I talked with a few of them, they told me they were trying to reach family in Orlando, but had no money, no phones, and no way to travel the 1,300 miles. They were stuck.

What Abbott’s now doing—using state funds to move asylum-seekers somewhere where their families or nonprofits can take care of them—is something immigrant advocates have long dreamed of. Indeed, some nonprofit organizations such as Miles4Migrants, which accepts donations of both cash and frequent-flier miles, exist entirely to help asylum-seekers pay for trips to reunite with family who can shelter them as they await the outcomes of their legal proceedings.

“When the CBP paroles people and drops them off at shelters or bus stations, the federal government does not pay for them to reach their ultimate destination,” says Aaron Reichlin-Melnick, senior policy counsel for American Immigration Council, an immigrant advocacy organization. “So Abbott’s plan to have the government pay for that is actually far more than what they would normally have.”

Abbott, for his part, has tried to frame the busing program as a way to make the Biden administration and Democrats in Congress pay the price for what he falsely describes as their open-borders policy (Biden has maintained and even expanded many of Trump’s most stringent border policies, according to the Cato Institute, a libertarian think tank). The governor wrote yesterday that because of Texas’s busing of migrants to Washington, D.C., “the Biden Administration will be able to more immediately meet the needs of the people they are allowing to cross our border.” But Abbott didn’t coordinate with CBP, whose chief said the governor was “taking actions to move migrants without adequately coordinating with the federal government and local border communities.” Nor did Abbott offer much advance notice to D.C. officials, local immigration nonprofits, shelters, or anyone else who might have assisted the migrants the bus dropped off outside Fox News offices.  Instead, asylum-seekers, left to fend for themselves, were being used as props in a PR campaign.

Now that Abbott’s busing project has commenced, an independent social services agency, Catholic Charities, has stepped up in D.C. to help house and minister to the asylum-seekers arriving from Texas. Anyone who needs to get to the East Coast will now have a bus ride entirely paid for, and then a warm welcome at the end. Abbott has often criticized moves by the Biden administration, such as its rollback of Title 42, as policies that could encourage more migrants to take the risky trip north to the U.S. border. Since the governor won’t take questions about his policy, one can only wonder how he expects his free bus rides not to have the same effect.