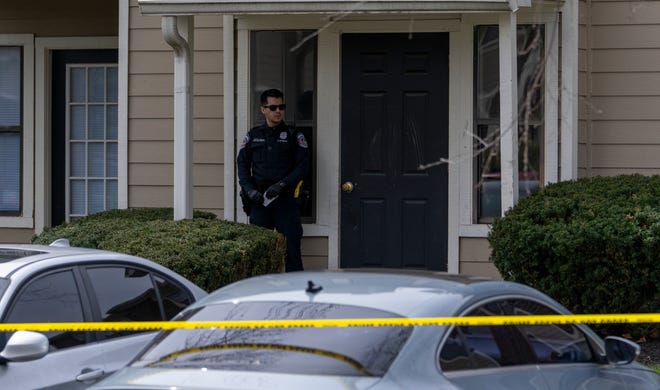 This story contains the topic of suicide. If you or someone you know may be struggling with suicidal thoughts, call the suicide prevention hotline at 800-273-8255.

Three people are dead in a shooting on Indianapolis’ northwest side in which police believe to be a murder-suicide.

The shooting was reported at the Oaks of Eagle Creek apartment complex in the 5300 block of Holly Springs Drive West, near West 56th Street and and I-465.

Indianapolis Metropolitan Police Department officers were called to the complex just before 1:30 p.m. Friday, April 15, 2022 on a report a person had been shot and found three adults dead.

Chelsea Laureano, who lives in the building across from where the shooting happened, said she was unloading groceries when she heard people screaming and a woman yelling to call the police.

Police are not looking for a suspect and homicide detectives are on scene talking to witnesses and gathering evidence, Burris said.

Investigators believe the fatal shooting was a murder-suicide, according to a news release issued Friday afternoon. There is no threat to the public at this time, Burris said.

“Conflict resolution cannot be solved with gun violence,” Burris said. “People lose their lives. Communities are shaken, they are broken because we continue to answer violence for violence and that is not acceptable in our community.”

Danyette Smith, director of Domestic Violence Programming with Indianapolis’ Office of Public Health and Safety, said the shooting was likely the result of domestic violence.

Smith encouraged victims of domestic violence to have a safety plan in place before fleeing a violent relationship. Several agencies in the city, The Julian Center, Silent No More and Beacon of Hope Crisis Center, can assist with a plan, Smith said.