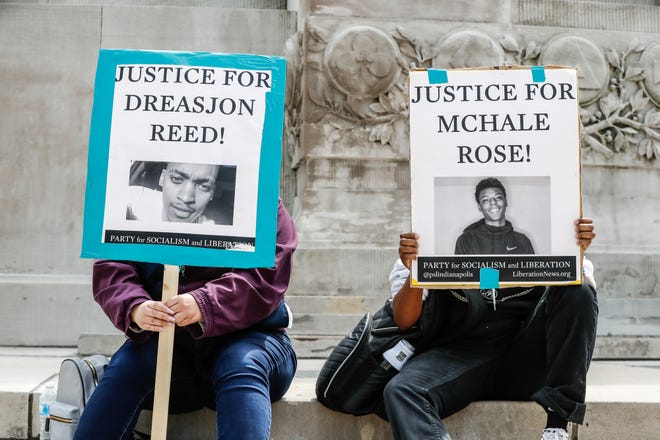 The federal lawsuit against the city filed by the mother of Dreasjon Reed is moving toward a trial after a judge tossed out some of its allegations but left untouched the central one: that Indianapolis police used excessive force when an officer fatally shot her son.

Lawyers representing the City of Indianapolis acknowledged to the court that Reed’s mother Demetree Wynn had, through her lawsuit, offered enough evidence to show there’s a dispute between both sides over what actually happened the moment Reed was killed.

That means a jury may have to weigh in.

Indianapolis Metropolitan Police officer De’Joure Mercer used a stun gun and then shot Reed on May 6, 2020 after he allegedly led officers on a car chase and foot pursuit. Reed pulled a pistol from his waistband and fired at Mercer, Indiana State Police said, moments before he was fatally shot.

The shooting, which Reed broadcasted through Facebook Live, attracted national media attention. His name became a rallying cry for civil rights advocates during the 2020 protests in Indianapolis over police killings of Black Americans. Reed was also featured in an NFL campaign on social justice.

In November 2020 a grand jury overseen by special prosecutor Rosemary Khoury declined to indict Mercer on criminal charges. After the decision was announced, Indiana State Police presented to the public forensic and video evidence that the agency said showed Mercer used a stun gun on Reed as he was attempting to draw a pistol.

After that, both sides exchanged fire, investigators said. But it remains unknown who fired first.

Wynn filed her legal complaint in June 2020 with the U.S. District Court for the Southern District of Indiana. She is requesting that the court order the city and Mercer to compensate her for Reed’s death.

In court documents from the lawsuit, Wynn’s attorneys wrote that the shooting “resulted from the unconstitutional custom and practice of IMPD officers who routinely use deadly force to apprehend suspects who are young black men.” They also wrote that Indianapolis police officers “routinely disregarded” use of force policies.

The city’s attorneys questioned why her lawsuit targeted Indianapolis Metropolitan Police Chief Randal Taylor for wrongful death, and the city for how its police officers use force. Taylor didn’t play a role in officer Mercer’s decision to fire at Reed, the attorneys wrote, and Wynn didn’t present evidence that officers ignored use of force guidelines.

IMPD:Can the IMPD officer who shot Dreasjon Reed win his lawsuit against the NFL?

U.S. District Judge Jane Magnus-Stinson sided with the city. She wrote that no evidence was presented showing that Indianapolis police officers frequently violate the constitutional rights of young Black men through use of force incidents. She also said there was no evidence Taylor had any role in the shooting.

She threw out those claims against the city and Wynn’s wrongful death claim against Taylor. She also threw out claims that Mercer used excessive force when he used his stun gun on Reed, and that he violated Reed’s constitutional rights by not giving him medical assistance after using the stun gun.

Indianapolis:‘It’s not only me’: The reasons people sue Indianapolis police go far beyond money

Like with the excessive force claim against Mercer, she did not decide on Wynn’s state law claims around battery and wrongful death against Mercer and the city, leaving them open to a jury trial.

Magnus-Stinson encouraged the parties to reach a resolution before then. The trial is scheduled for June.

Call IndyStar courts reporter Johnny Magdaleno at 317-273-3188 or email him at jmagdaleno@indystar.com. Follow him on Twitter @IndyStarJohnny