The Truth May Very Well Be ‘Out There’ 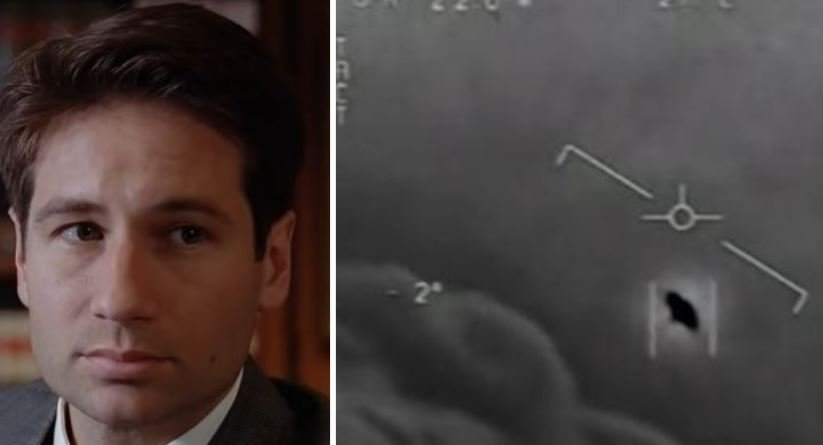 My love for alien television was born first out of an infatuation with David Duchovny or, probably more accurately, Fox Mulder when I was a kid. As an adult, I still enjoy catching the occasional re-run marathon of “The X-Files” but have also found myself hooked on pseudo-documentary shows.

For example, there is something delightful about “Ancient Aliens.” They transport you to an exotic location and teach a few exciting science stuff from real scientists. Then BAM…the show’s most eclectic hosts link it all to ancient aliens.

What do you think about aliens? 🤔 Watching Ancient Aliens… 👽 pic.twitter.com/O1pdMzCPz4

This past year I forced my husband to watch a new show called “Unidentified.” The show follows a group of people with various credentials ranging from the founder, former Blink182 band member Tom DeLonge, to former Deputy Assistant Secretary of Defense for Intelligence Chris Mellon.

The most notable individual on this show is Luis Elizondo. Elizondo claims to have formerly led the Pentagon’s Advanced Aviation Threat Identification Program, otherwise known as AATIP, before resigning out of bureaucratic frustrations.

Elizondo has been making the media rounds in light of a recent Defense Intelligence Reference Document (DIRD) released by the Defense Intelligence Agency, thanks to a FOIA request from 2017. The DIRD focused on the biological consequences of encounters of, well…the third kind, I suppose.

Last week Elizondo appeared on Fox Business with Kennedy to discuss the report’s findings. Included were reports of radiation burns inflicted on fighter pilots. Initially explained as sunburns, the belief now is that they are from high-frequency radiation.

Perhaps what is more alarming is reports that some of these pilots have experienced internal organ damage and changes in the morphology of their brains. In addition, the report points to 42 different cases that include “unaccounted for pregnancies.”

“The Secret’s Out Of The Bag”

Officials at the Pentagon have tried to discount Elizondo’s association with AATIP, alleging that he was never assigned to the program. Elizondo argues that he wasn’t appointed by the Department of Defense but rather through legislative action. His resignation, he argues, burned bridges with his former counterparts.

This isn’t the first time in recent events that the government has released credible evidence that may prove we are not alone in the universe. Pilots from the USS Nimitz spotted a 40-foot white Tic-Tac-shaped object that defied any known flying craft of this planet. Another leaked video of a spherical flying object flying off San Diego’s coast was later confirmed authentic by the Pentagon as well.

Other than the belief held by ufologists that these encounters are aliens surveilling our military capabilities, there are different hypotheses on the origin of these aircraft. Some say they could be next-generation aerospace technology.

It wouldn’t be the first time the U.S. military has tested out secret prototype aircraft and drones. In the same vein, some say they might be U.S. technology secretly tested on one part of the military by another to see how we react to such encounters. The idea that they could be adversary technology from Russia and China is much scarier.

One of my favorite ufologists is Nick Pope. He seems to be on everything from “Ancient Aliens” to even an appearance on Tucker Carlson. Pope worked for the British government’s Ministry of Defense, where he claims he studied UFO phenomena. In an interview last week, Pope said:

“All of this is why Congress is now taking very close note of this. There are multiple UFO provisions in the latest defense bill.”

He’s not kidding either. The desire for government transparency and further investigation into unexplained aerial events may be the only bipartisan issue in D.C. So when last June’s report to Congress could only account for one of the 144 UAP sightings between 2004 and 2021, lawmakers started to take serious notice.

Related: Pilot Captures Footage Of ‘UFO Fleet’: ‘That Is Some Weird S***’

The Search For Extra Terrestrial Life

When the movie Contact came out, I became obsessed with SETI (Search for ExtraTerrestrial Intelligence). Gone are the days when this was the only science-based organization looking towards the stars and honestly looking for other life.

Avi Loeb, the Frank B. Baird Jr. Professor of Science at Harvard University, is heading the Galileo Project to establish a network of sophisticated telescopes that will scan the skies for extraterrestrial objects. Well known in his field as brilliant, he has taken his fair share of criticism from his community for including individuals like Lou Elizondo and Nick Pope in the project. They are viewed as extreme and fringe.

Others in the science community and UFO enthusiasts are looking forward to what comes from the James Webb space telescope.

This telescope is the largest and most powerful of its kind. Launched in December with plans to operate this summer, the telescope will scan the skies and peer back to when the universe was beginning to form.

No matter your belief in little green men or alien grays, the discovery of unidentified whatevers flying in our skies and the advances in scientific discovery make this an exciting time to be alive.

For thousands of years, man has looked up at the skies and wondered at the dark canvas above. Are we alone? What wonders are out there?

With wokeness, socialism, and lousy fashion such as high-waisted mom jeans and man buns, they can beam me up anytime now if extraterrestrials do exist. But I’ll take a hard pass at the unaccounted for pregnancy.