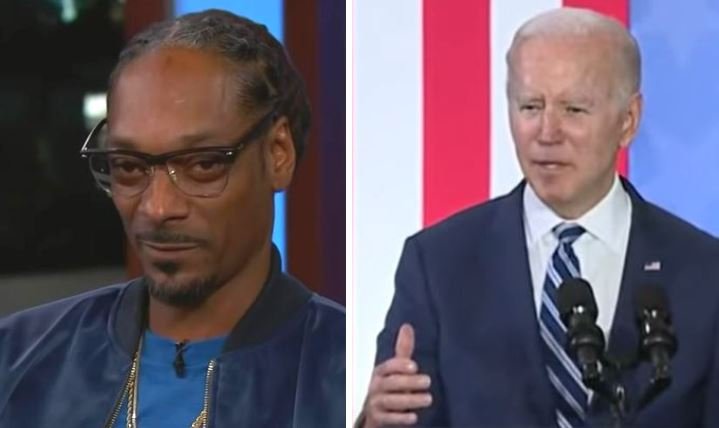 Rap megastar turned pop culture icon Snoop Dogg posted a video of President Biden seemingly turning to shake hands with no one after a recent speech and the Instagram post soared to over 1 million views in the first hour.

Snoop Dogg exploded onto the American hip hop scene in the early 90s after being featured on Dr. Dre’s hit album, The Chronic. Since then, the rap icon has become best friends with Martha Stewart and is a pop culture staple. This year, the “Gin & Juice” rapper headlined the Super Bowl 56 Halftime Show alongside fellow 90s pop icons Dr. Dre, Mary J. Blige, and Eminem.

Calvin Cordozar Broadus Jr., known professionally as Snoop Dogg, has over 72 million followers on his Instagram alone. Those followers ate up the widely circulating video of the Biden blunder.

While this is nothing new for Biden, Snoop Dogg’s post could very well reach millions of people who might not have otherwise seen the gaffe.

Of course, Biden’s blooper reel is almost as long as his tenure in politics. Comedians have been producing some of their all-time funniest bits at Biden’s expense for years.

Like this: Joe Biden Gets Roasted For His Cognitive Abilities At 2014 White House Correspondents Dinner

The now-viral clip is from a speech at North Carolina Agricultural and Technical State University in Greensboro on April 14.

After concluding the near 40-minute speech, Biden turns from the podium with his hand outstretched. The President appears poised to shake hands but there is no one else on stage.

As the awkward moment drags on, event footage shows neither event staff nor attendees approach the president to exchange pleasantries.

Biden had been speaking about American innovation in a bid to urge Congress to pass the United States Innovation and Competition Act of 2021, what he called the “bipartisan innovation act.” The bill will increase funding for American semiconductor production.

Not exactly a lightweight subject for the 79-year-old President to tackle.

Host of the Fox News show “Fair Minded,” Leo Terrell shared the video with a quip about the invisible man.

There is nothing wrong with Joe Biden shaking hands with the invisible man! pic.twitter.com/7iXwddyEbp

WATCH: Biden tries to shake hands twice with NOBODY… TWICE. There’s no convincing me that he doesn’t have dementia. pic.twitter.com/ZvJJK0pwjL

The Bongino Report covered the now-viral clip saying, “This is fine. He’s fine. Everything is fine.”

We literally love everything about @snoopdogg and @kellyclarkson. 💜

Fifty-year-old Snoop clearly loves to joke around, as evidenced by his “American Song Contest” hosting antics and his personal Instagram.

His feed is filled with memes and other funny posts that are not necessarily of the PC variety. At the rate Biden is going, there’s a good chance we’ll see him make another appearance on Snoop Dogg’s Instagram.