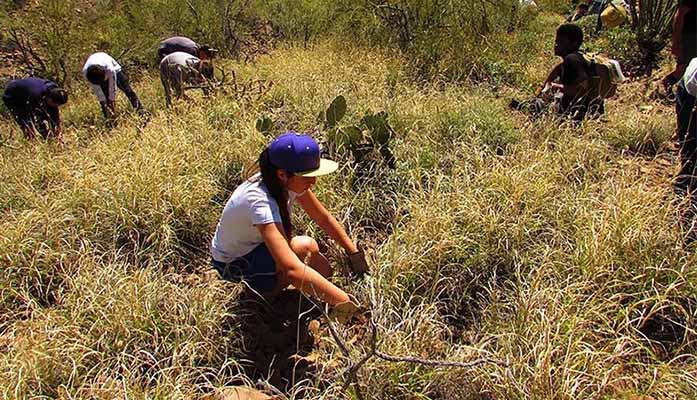 PHOENIX — Marilyn Hanson takes a 3-mile walk every day along a river wash and bike path northwest of Tucson.

While she walks, she listens for birds and surveys the areas along the path for invasive species like buffelgrass, a perennial weed that has ripped across southern Arizona, threatening native plants and drastically increasing fuel for wildfires.

Buffelgrass was introduced on a large scale to the Tucson area for erosion control in the 1970s. It has become a scourge since then, eating up acres of fragile desert and displacing saguaros and other native cactuses, shrubs and trees.

Hanson has pulled up buffelgrass for more than 20 years. She says those days are over, but she remembers back in 2012, when she and other volunteers removed these stubborn, scraggly clumps of buffelgrass from the river wash where she walks.

On a recent morning, she returned to check on this spot, and found it completely regrown and spreading.

“When I walk, I can’t look at the ground anymore, because it has just been covered by buffelgrass. I have to look up at the sky, the mountains, because the floodplain is filled with invasive plants” Hanson said. “It is no longer pretty. They have just totally encroached on this environment.”

Hanson, 79, is a retired biology teacher who moved to Tucson in 1999 and started volunteering for buffelgrass pulls with the Arizona Sonora Desert Museum.

Today, although she no longer pulls buffelgrass, Hanson maps infestations with the Sonoran Desert Weedwackers, an organization that works to protect the desert in Tucson Mountain Park.

“This is an impossible task. You need to go out year after year, and you need people to manage this problem,” Hanson said. “But when I walk on the trail, it’s rare that I see anyone outside, even in the nice weather. People have made the choice not to be outside. As a biologist, that’s painful.”

Despite years of effort from people like Hanson, and groups like the Weedwackers and national, state and county parks, buffelgrass has continued to fill in some desert environments and has become more noticeable across southern Arizona.

But experts and volunteers say even though buffelgrass is here to stay, they are getting a better handle on managing it.

“Buffelgrass is one of the major concerns for our Sonoran Desert in and around Phoenix and Tucson,” said Willie Sommers, the invasive plant program coordinator for the Arizona Department of Forestry and Fire Management. “It’s starting to get attention because these grasses can spread and form such dense populations that can fuel wildfires.”

Buffelgrass is an extremely drought-resistant plant that can green up and spread faster than native plants when monsoon rains fall. Sommers said this allows it to easily outcompete native plants for water and light.

“Buffelgrass colonizes the naturally barren areas between trees, shrubs and cacti in the desert. It’s filling the space between our saguaros, and turning it into what looks like a desert grassland,” Sommers said.

Buffelgrass becomes fuel for wildfires to rip across the land when it is dormant and dry, or if it’s pulled and left uncovered on the ground. That’s especially dangerous if those fires are burning near homes. But there’s another concern, Sommers said.

“The Sonoran Desert is an ecosystem that is not well adapted to wildfire, and many of the charismatic native plants like saguaros cannot withstand the heat from the fire,” Sommers said. Buffelgrass, he said, is highly adapted to fire and can come right back after burns.

Saguaro National Park, to the west and east of Tucson, is one of the areas continually wrestling with buffelgrass management, and treatment is often slow going, said Perry Grissom, a restoration ecologist with the park. 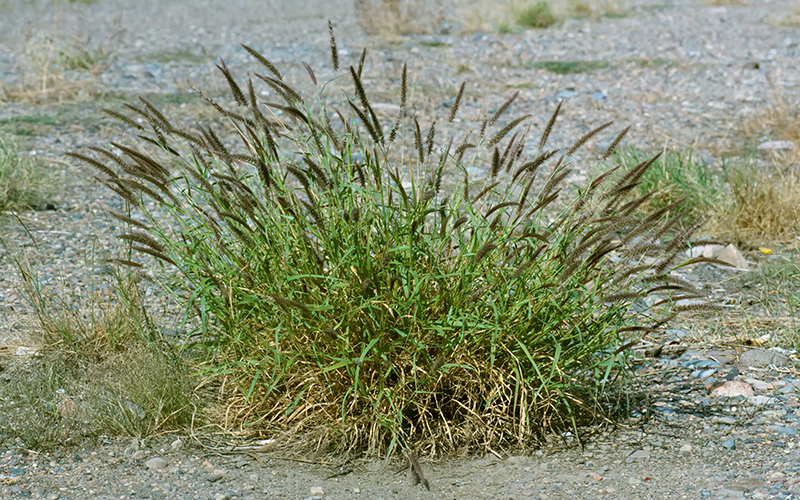 Buffelgrass was introduced on a large scale to the Tucson area for erosion control in the 1970s. It has become a scourge since then, eating up acres of fragile desert and displacing saguaros and other native cactuses, shrubs and trees. (Photo by Joe DiTomaso/Design Pics)

“It’s going to be a maintenance issue forever. But where we are treating it, we are able to make considerable progress,” Grissom said.

There are several ways to manage buffelgrass — spraying it with weed killer or physically pulling it out of the ground year after year, Grissom said.

“Around 2005, it became obvious the manual removal wasn’t keeping up with it, so we started using herbicides in addition to pulling,” Grissom said. “By 2014, the acreage had continued to expand, so we started spraying aerially from helicopters.”

Five years later, the total cover of buffelgrass had gone down, but there were still areas that were remote or hard to reach with sprayers that were not treated, Grissom said. That is where the most new buffelgrass growth is seen.

But this work is becoming increasingly difficult as buffelgrass colonizes more remote areas, said Brian Brainerd, a volunteer who does buffelgrass pulls.

Brainerd started removing the weed on his own in 2008 in Saguaro National Park and Tucson Mountain Park. Now he’s targeting areas that were not generally focused on, like along the sides of Mount Lemmon Highway and areas at higher elevations.

“Buffelgrass seeds are so light that they just blow in the wind, so it establishes itself high up on slopes and cliffs that nobody goes to, and that is treacherous work,” Brainerd said. “That’s what we’re looking at in the future. We need to start to get up to those high places to get that stuff.”

But the future of volunteer-based buffelgrass pulls is uncertain, Brainerd said. There aren’t enough volunteers to do the work year after year, and the existing group of volunteers is aging.

“There’s a major shortage of young people doing this. Every regular volunteer that does this, they are getting older. What is going to happen when this group stops?” Brainerd, who is 65, said. “Some of these volunteers are in their 70s, and they can’t be going on hourlong hikes up hills, bushwhacking the whole way.”

At this rate, volunteers will have to sacrifice parts of the desert to focus on areas they can reasonably protect, Brainerd said.

Hanson is among those volunteers who are finding it harder to do this backbreaking work. She stopped doing buffelgrass pulls at the start of the COVID-19 pandemic to protect her health and has not gone back.

But she has continued her role with the Weedwackers as another tool in buffelgrass management has emerged over the last decade and half — mapping buffelgrass invasions. 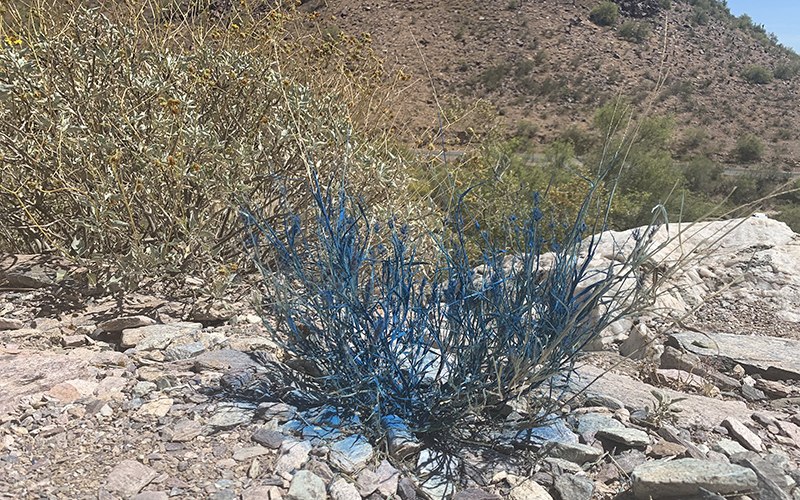 “I can easily do the mapping sitting on my computer at home. All I’m doing is receiving emails from people and inputting that data into Google Earth along with photos,” Hanson said.

Hanson has been keeping detailed records of buffelgrass invasions with real-time GPS data for 15 years. She also collects photos from people in the field.

She is constantly updating the intricate maps and photos of buffelgrass infestations on the Weedwackers’ website, which date back to 2008.

Hanson includes the weather and volunteer hours to give readers a sense of how hard volunteers worked in sometimes brutal weather conditions in tough terrain.

This is citizen science at its best, Hanson said, however, it’s hard to share this information and collaborate between volunteer groups and county, state and federal agencies.

“A key part of this is trying to get information from other groups and getting information out about the Weedwackers, so people can see the value of what we are doing,” Hanson said. “I want volunteers to feel like they are accomplishing something, and that it is not hopeless.”

Hanson said everyone can get involved in citizen science to help slow the spread of invasive species. It’s as simple as learning what buffelgrass looks like, so the next time you go out walking, you can see it, photograph it and report it, she said.

“​​I firmly support citizen science. It’s what my grandmother did on her farm when she kept records of birds. It’s what I used to teach my students in the classroom,” Hanson said. “With citizen science, we can then have researchers all over the globe. And it’s excellent data.”