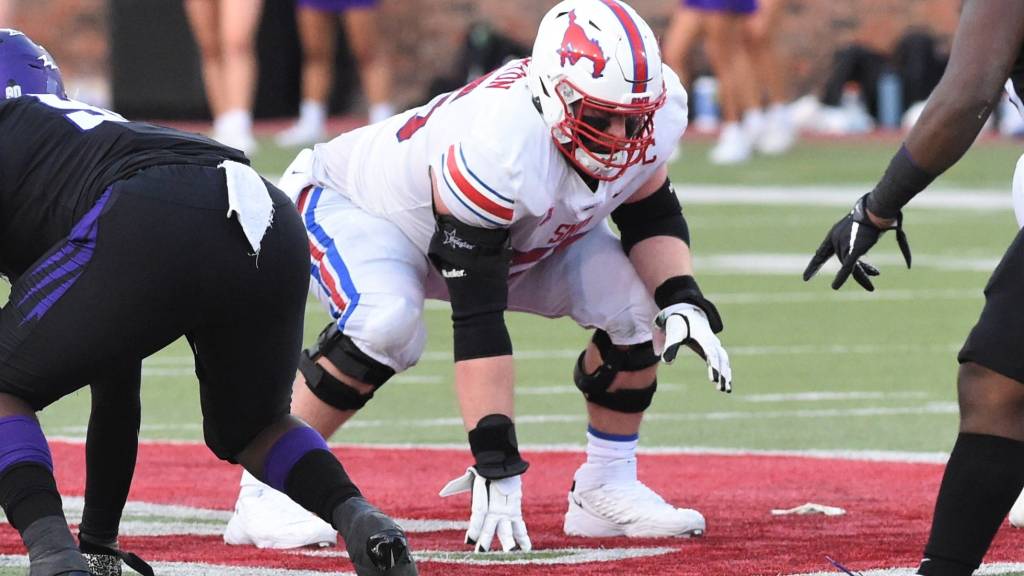 Howerton was one of the two undrafted free agents from SMU the Titans signed, along with wide receiver Reggie Roberson, whose scouting reports we’ve already covered.

The 6-foot-4, 309-pound guard became a starter in his first season with the Mustangs, and would go on to remain in a starting role in the years that followed, playing at center as well.

In order to get more information on Howerton, we’re taking a look at some of the scouting reports that were out there prior to the draft.

Very strong and powerful. For being a power-first kind of player he is surprisingly athletic and has great hip flexibility. Excellent run blocker, he is quick off the line and can pave a huge lane for running backs to go through. He is a powerful player, so even if he is only able to chip a defender, it is usually enough to make an impact. He is a good mover for someone his size and is able to work upfield very well. He also has a great pull step and is able to move across the line fluidly. His offense ran many play-action off of counters and he was always able to get into position in time to pass block. Good at pass protection when he is one on one with a defender and is nearly impossible to bull rush. Incredibly stout at the point of attack and really excels at protecting the A gap. Versatile, he can play all three interior line positions.

Doesn’t have the best feet, he will sometimes stop his feet on first contact and will lose momentum and balance because of that. He struggles with mirroring techniques and isn’t always quick enough to recover and make the block. Though he is good at moving across the line when it comes to stationery lateral agility he struggles. This comes back to not having quick feet, it’s those quick back and forth movements that give him trouble. Another aspect of pass protection he has difficulties with is picking up blitzes and stunts. He just doesn’t have the reaction time to effectively pick them up. He can become overwhelmed against blitz-heavy defenses and will get very off balance. When this happens he loses his power base and will become easy to get put on the ground.

This is a stout and physical presence in the interior of an offensive line. Very versatile as he played all three positions in the interior. He is a road grader of a run blocker, powerful at the point of attack and extremely difficult to get past. He is quick off the line and has great hip flexibility to seal running lanes. He is athletic and can move upfield and across the line easily. Has a great pull step and is accurate when finding his target. He is a good pass blocker, who is nearly impossible to bull rush. His wide frame allows him to cover entire gaps, but he can lose sight of blitzes and stunts. He doesn’t have the best feet and stops them upon first contact, which stops his momentum and gets him beat. Heavy blitzing teams overwhelm him and he begins to become very unbalanced. He gets top-heavy when this happens and is easy to knock on the ground. Very comparable to Cleveland’s guard Wyatt Teller, because like Teller he will be a mid to late-round draft pick and will be a much better player if he is in a run-heavy offense.

Positives: Versatile blocker who started five seasons at SMU. Explosive at the point, fires off the snap into blocks, and knocks defenders off the line. Keeps his head on a swivel, works well with linemates, and plays through the whistle. Starts with good knee bend and leverage.

Analysis: Howerton was a tough, durable blocker on the college level but comes with minimal upside and scheme limitations.