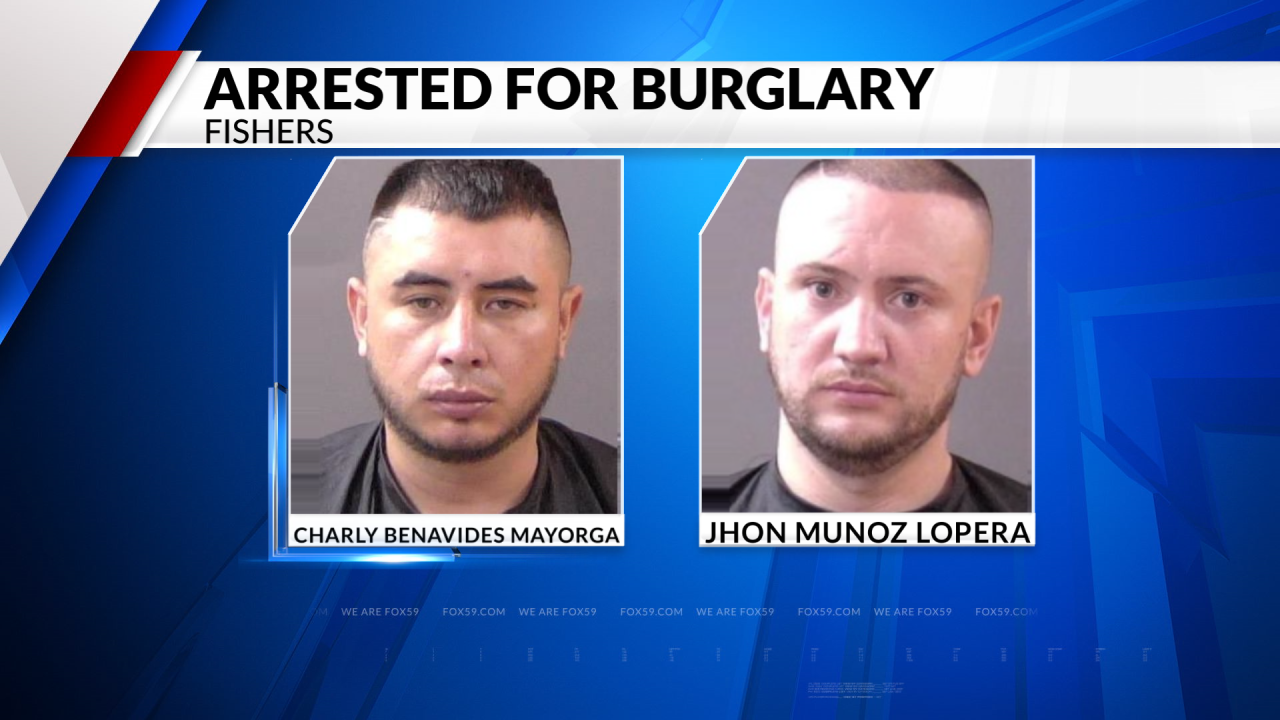 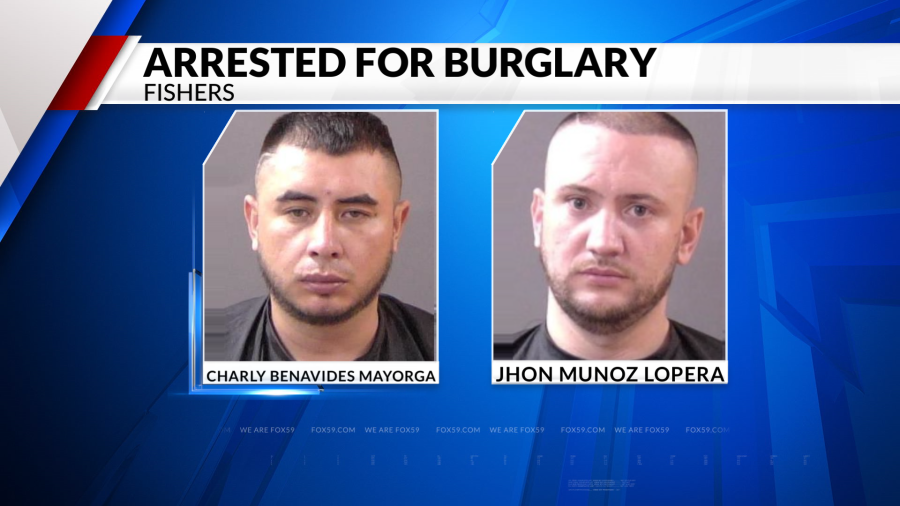 FISHERS, Ind. — Two men arrested in connection to a Fourth of July home burglary in Fishers are believed to have ties to a theft gang originating out of country and operating in the area, Fishers police said.

According to the Fishers Police Department, officers were called to a home in the 15600 block of Allistair Drive just after 10:30 p.m. on July 4 in response to a residential alarm. A probable cause affidavit shows the alarm was triggered by a sliding door, motion upstairs in the home and someone tampering with an alarm panel three times.

When officers arrived they spotted two men, later identified as Mayorga and Lopera, taking off running from the scene. One of those suspects, identified as Lopera, ran across East 104th Street and into the neighborhood directly to the south, documents show.

According to the probable cause affidavit, Lopera was spotted running behind a home on Campolina Lane. A K9 officer was requested so that police could conduct a search.

Resident Lance Stella said he was sitting in his house with his dog, who was nervous due to the fireworks outside, when he spotted someone in between his home and his neighbor’s.

“It was an officer who told me to get back in my house, somebody had run from him and he was trying to find him,” said Stella. “I figured it was a kid shooting off fireworks, something stupid like that.”

Several minutes later, Stella said he noticed the lights outside of his home were still there and when he looked into his backyard, he saw more officers with flashlights looking around.

“Then all of a sudden I heard the cops yelled to this guy to freeze and in my sunroom I saw the shadow of the guy with his hands up,” said Stella. “That’s when I turned the corner and looked eye to eye with this guy and thought, this guy’s about to come into my house.”

Stella watched as officers put the suspect into handcuffs and said he was glad to see the quick response and communication with neighbors nearby.

According to police, a search of Lopera’s fanny pack turned up a cell phone, driver’s license from Spain, a Columbian passport, and a New York ID card with a different name.

“The quality of the ID card was poorly made, as the lamination did not fully fit the ID. The Spain driver’s license had the same name and date of birth as the New York ID. The picture on both ID’s looked like Jhon,” read a probable cause affidavit.

An affidavit alleges Lopera was in possession of a document not issued by a government entity that claims to be a government issued ID.

Court documents show the second suspect, Mayorga, was taken into custody after he was found hiding near a tree in the backyard of a home on Ransford Boulevard. He had been bitten by a K9 officer and suffered minor injuries, police said. He was evaluated before being transported to the jail.

Documents show that the Venezuelan ID card and Buenos Aires driver’s licenses had two different names on them, neither of which were Mayorga, but did contain photos that looked like him.

Like in Lopera’s case, the affidavit also alleged that Mayorga was in possession of a document not issued by a government entity that claims to be a government issued ID.

Neighbor Brent Shreve said he heard about what happened the next morning and was shocked by the news.

“I think anytime there’s a big event like that in the neighborhood, news travels fast,” said Shreve. “This is not activity that you want in your neighborhood or anybody’s neighborhood.”

According to documents, evidence technicians back at the home where the burglary happened found that the electrical box providing power to the residence was ripped off the side of the home and damaged, the rear slider door was pried open, and items from inside, some of which were recovered nearby, were missing.

Police said officers found nearby a black crowbar, a zip up laundry bag that contained more than a dozen designer purses and wallets totaling nearly $26,000 in estimated value, and multiple paper envelopes with the victim’s business information printed on it. The paper envelopes had several thousand in cash inside, documents show.

Fishers police confirmed to FOX59 that a gun reported missing from the home during the burglary has not yet been recovered. Officers with the department, including K9 officers, did a thorough search of the area to try and locate it.

According to the affidavit, the victim in the burglary had been out of town and told officers nobody had permission to be in the residence.

Shreve describes the area as quiet, with a lot of children and families, and said it was unsettling to hear of anything like this. He was relieved those allegedly responsible were taken into custody, but shocked to hear they may be connected to something even bigger than this single burglary.

“I think any burglary is shocking, especially you no one is connected to something that’s outside of the community,” said Shreve.

Police said based on the circumstances surrounding the incident and the evidence on the suspects, they believed that both are involved with a criminal organization known to operate in the Fishers area.

“Fishers Police Department Intel recently advised of South American Theft Groups operating in the Hamilton and Marion County. The burglaries carried out by these groups involve targeted thefts of jewelry, cash, safes, but not electronics,” read the affidavit.

Back in March, FOX59 shared a warning from police for residents to be extra cautious after several home burglaries.

According to Fishers police, the department had received reports of residential burglaries in the last year, with several of those happening in the Masthead and Hamilton Proper neighborhoods.

Homeowners had reported missing jewelry, cash and guns, according to police, who said many of the burglaries they’ve investigated appear to target the master bedroom of a home.

“Most of the burglaries that we’ve seen are forced entry; smash windows, targeted into the master bedroom so that they can just try and quickly grab jewelry and other valuables out of the master bedroom and leave before anybody sees them,” said Officer Jessica Stout back in March.

“It appears to be a theft group, South American Theft Group (SATG). They’re groups that are formed in South America, a lot of times in Colombia, and they’re actually educated on how to commit these types of burglaries,” said Stout.

Stout said members of SATGs often enter a country by obtaining a travel visa, commit thefts and then send the proceeds back to their group.

“This happens all kinds of places. It happens in the United States, the U.K., Australia; it happens all over but these groups are really trained in how to do this type of theft,” said Stout.

Stout said the department has several people who work full time in its intel unit to try and pinpoint any crime trends, why those crimes may be happening and where those responsible for them are coming from, so they can try to tailor their policing to the trends.

“Our intelligence unit and our detectives work together to come up with what strategies the criminals are using so we can better to police against it,” she told FOX59.

Police remind people to continue to be hyper-vigilant and take steps to protect their home and property and said people should not let their guards down only because of these arrests.

Police also recommend you talk with trusted neighbors; keep an eye on their house and ask them to watch yours.