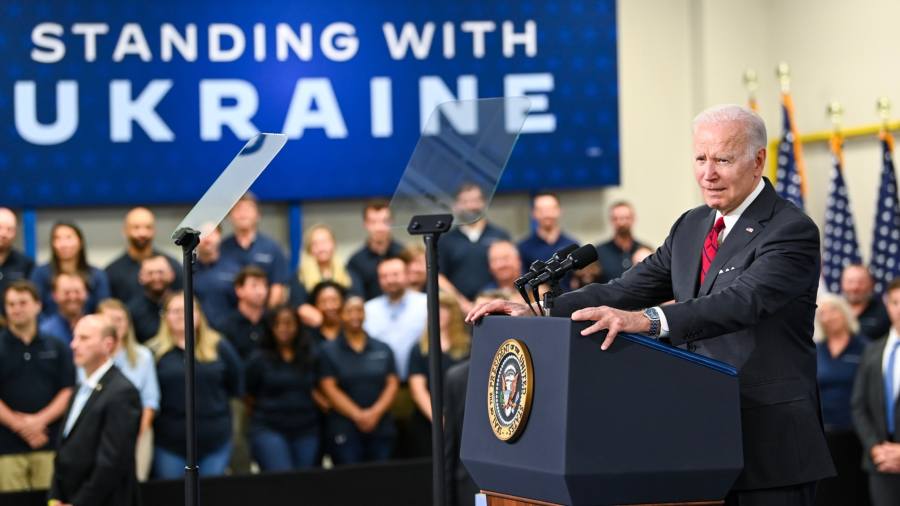 America’s response to a suspected Russian missile strike on Poland this month is an example of how to operate. Ignoring the kamikaze clamour to invoke Nato’s collective self-defence clause, Joe Biden and his allies quietly parsed the facts and found it came from Ukraine. There was no leaping to conclusions or brinkmanship. Muting Washington’s evergreen hawks should be a rule of thumb for how America does business.

It goes against the grain of course. America’s most bellicose president, Teddy Roosevelt, suggested that the US should speak softly and carry a big stick. What stuck out was the first half of Roosevelt’s dictum since it was so at odds with the character of a nation that even then aimed to remake the world in its image. Wanting others to be like you is an aggressive impulse, even when it is well-meant.

A US that leads as much by omission as commission will thus be hard to sustain. The guidebook for how America should act is written in recent failures and less celebrated successes.

From Vietnam to Iraq, the US is at its worst when it attempts to impose outcomes on others. The tendency to see the world in black and white often prevents the US from seeing the reality before it. Vietnam’s insurgency was not a domino in a communist board game. It was an anti-colonial struggle. Saddam Hussein’s Iraq was not a partner of Al Qaeda. It was just another thug regime. Afghanistan, of all places, was never going to be remoulded in another’s image.

That oft-repeated failure to grasp the world on its own terms reduces America’s ability to reshape it. This is why Ukraine offers such a valuable case study. Biden’s foreign policy to-do list was all about China not Russia. The US president did his best to assuage Vladimir Putin’s paranoia by hosting an ego-stroking summit in Geneva a few months after Biden took office — and a few months before the Russian invasion. The aim was to take Moscow off the worry list so that America could complete its pivot to Asia.

It did not work as planned. The unintended impact of Putin’s assault on Ukraine has been to bring out America at its pragmatic best — reacting to hostilities rather than initiating them. Though Biden would be wise to avoid the infamous phrase “leading from behind”, that is what the US has been doing. The war is overtly led by Ukraine’s Volodymyr Zelenskyy. America has played the role of chief quartermaster, intelligence provider and diplomatic cheerleader. The terms on which the war will end will also be set by Zelenskyy, though in practice the US will have a decisive say.

It is too soon to judge the impact in totality. But Ukraine’s successes so far have been predicated on America’s quiet and consistent resolve. Those are the qualities of an effective modern superpower. They are very different to the bombastic ones of the dangerous nation exhibited in hawkish dreams. Russia’s “special military operation” may be unique. But America’s response has generic features that should apply more broadly. Two of them stand out.

The first is that America’s partners prefer it this way. They rarely fear that Washington will be too meek. Their concern is about US over-reach. The same is doubly true of the global swing vote on continents such as Africa and South America.

Much angst has been generated by the global south’s apparent indifference to Russia’s aggression by abstaining at the UN and refusing to comply with US-led sanctions. Treating them as callous or irresponsible is a misreading. The rest of the world remembers America’s Iraq invasion and post-9/11 mis-steps. The US’s bill for behaving recklessly is still being paid. No country, by contrast, will resent America’s studiously non-reckless support for Ukraine’s right to exist.

The second is that the US should recalibrate its approach to China. Biden’s strategy is to frame the world as a struggle between autocracy and democracy. This makes people nervous as it sounds like the kind of Manichean framing that has led America into wars of choice. It signals that Washington is impatient to do something even if the situation demands less.

The history of great power screw ups is frequently about mistaking proactiveness for being in control. In reality, acting pre-emptively is often the quickest way to lose control. George W Bush, like Putin, is living proof of that. An economic policymaker once said: “Plan beats no plan.” In foreign policy, the reverse is more often the case. Biden had no plan for Ukraine. The fear is that America does have a plan for China.