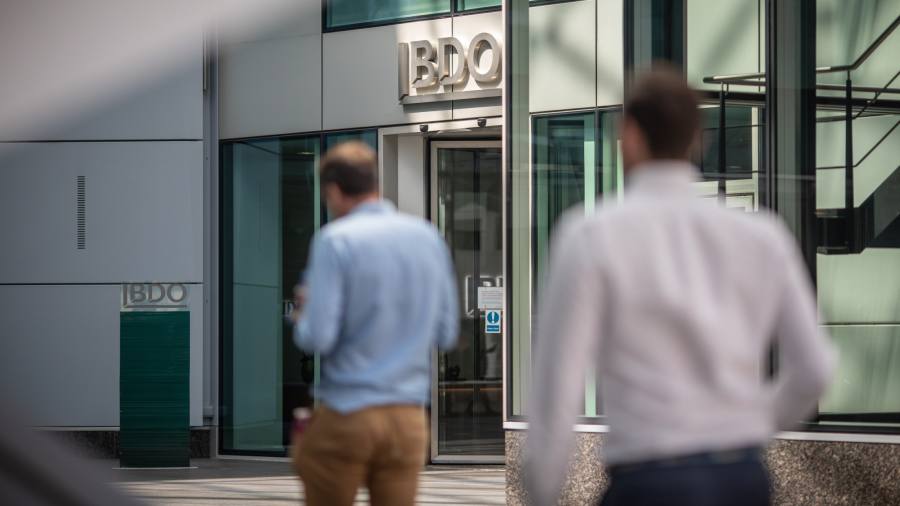 BDO’s partners had their pay cut after the UK’s fifth-largest accounting firm ploughed money into a hiring spree partly designed to give staff a better work-life balance.

Profits have been rising across the professional services sector but fell at BDO in its most recent financial year as the group spent heavily on a recruitment campaign that increased its workforce from 6,000 to 7,000.

“We’ve spread the load over more people,” said Paul Eagland, managing partner. “People are . . . having to spend less time at work than they did the year before,” he said, adding that the hiring strategy was partly in response to employee feedback on the importance of work-life balance.

The move is the latest sign of the intense competition professional services firms face in attracting staff, with some handing out larger than normal pay rises and offering flexible hybrid working policies.

BDO said the average number of hours billed to clients by its auditors and advisers fell 7 per cent to about 1,250 a year. The firm spent £70mn on recruitment, technology and promoting more than one-third of its staff.

As a result, profits fell to £187mn in the 12 months to July 1, down from £203mn a year earlier, despite an 11 per cent increase in revenues driven by strong demand for advice in areas such as corporate transactions.

The decline in profits pushed average pay for UK partners down 15 per cent to £647,000, a reversal from the previous year when the payouts eclipsed those at larger rival EY. Average partner earnings were also held back by the net addition of equity 29 partners, taking the total to 317.

Asked whether the darkening economic outlook and high inflation meant the firm mistimed its recruitment drive, Eagland said the expansion of its workforce would leave BDO with enough staff to continue growing when the economy picked up.

“This is part of our longer term strategy to say, ‘let’s carry on investing in these people and do all we can to retain them’ so that when we do come to the other side of this recession, we’ve got enough people to help us start growing more profitably,” he said.

The firm’s costs were also driven higher by the return to more normal levels of expenses in areas such as travel after the pandemic, said Eagland.

Across its businesses, BDO’s audit division reported the biggest rise in revenues, with higher fees helping boost sales by 17 per cent to £324mn.

Revenues from the advisory division rose 10 per cent to £286mn while sales by the tax unit reached £199mn, a 3 per cent increase.

BDO has been criticised by the UK accounting regulator over the quality of its large audits. Eagland said its plan to address the shortcomings “will take probably two years to work its way through the system” and be reflected in its inspection results produced by the Financial Reporting Council.

Revenues in the current financial year were growing at about the same rate as last year, said Eagland, adding that the midsized businesses that form BDO’s client base had proven “resilient”.