Son of Buffalo victim pushes Congress: ‘What are you doing?’ 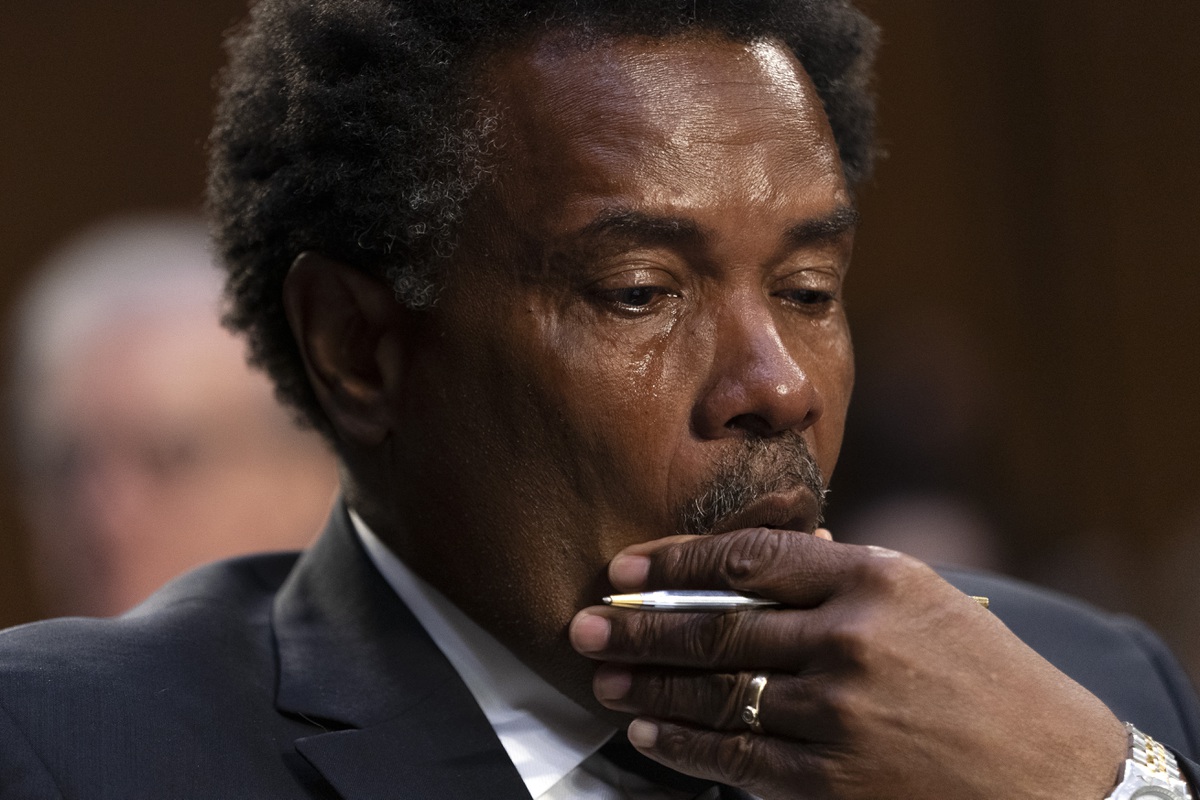 Garnell Whitfield, Jr., of Buffalo, N.Y., whose mother, Ruth Whitfield, was killed in the Buffalo Tops supermarket mass shooting, wipes away tears as he testifies at a Senate Judiciary Committee hearing on domestic terrorism, Tuesday, June 7, 2022, on Capitol Hill in Washington.

WASHINGTON — The son of Ruth Whitfield, an 86-year-old woman killed when a gunman opened fire in a racist attack on Black shoppers in Buffalo, New York, challenged Congress Tuesday to act against the “cancer of white supremacy” and the nation’s epidemic of gun violence.

Garnell Whitfield Jr.’s emotional testimony comes as lawmakers are working furiously to strike a bipartisan agreement on gun safety measures in the aftermath of back-to-back mass shootings. Ten days after the shooting death of his mother and nine others in New York, another 18-year-old gunman with a semi-automatic rifle opened fire in Uvalde, Texas, killing 19 school children and two teachers.

“What are you doing? You were elected to protect us,” Whitfield Jr. told members of the Senate Judiciary Committee.

“Is there nothing that you personally are willing to do to stop the cancer of white supremacy and the domestic terrorism it inspires?” he asked. “If there is nothing then, respectfully, senators … you should yield your positions of authority and influence to others that are willing to lead on this issue.”

The hearing is the first of two this week as families of the victims and survivors of the mass shootings in Buffalo and Uvalde appear at public hearings and events on Capitol Hill to show the human toll of America’s gun violence and urge Congress to act.

Pressing for a deal, President Joe Biden met Tuesday with Sen. Chris Murphy, a key Democratic negotiator, who has worked most of his career trying to curb the nation’s mass-shooting scourge after the heartbreaking slaughter of 20 children at Sandy Hook Elementary in his home state of Connecticut a decade ago.

Murphy told reporters after the meeting that he was grateful to have an opportunity to update the president on the talks. “Obviously we’ve still got work to do in the Senate,” he said.

Murphy said his goal is to try to get an agreement this week, but he added that Senate Majority Leader Chuck Schumer has been clear that “we need some extra time to dot the i’s and cross the t’s that will get it.”

Also Tuesday, actor Matthew McConaughey, who is from Uvalde, made the rounds of Senate offices before heading to the White House to open the daily briefing. McConaughey, who earlier this year considered a run for governor of Texas, gave a speech on the importance of taking legislative action “to make the loss of these lives matter.”

“We want secure and safe schools and we want gun laws that won’t make it so easy for the bad guys to get the damn guns,” he said. The 52-year-old actor and his wife drove to Uvalde on the day after the shooting and spent time with some of the victims’ families.

On Wednesday, the House Oversight Committee is expected to hear from more victims’ families and from fourth-grader Miah Cerrillo, who captured Americans’ attention after she described covering herself in her dead classmate’s blood and playing dead to survive the shooting rampage in Uvalde.

The Senate hearing Tuesday focused directly on the white supremacist ideology that authorities say led an 18-year-old gunman dressed in military gear to drive hours to a predominately Black neighborhood in Buffalo and live stream his violent rampage. The shooting left 10 people dead and several others wounded.

“My mother’s life mattered,” Whitfield said. “Your actions here will tell us if and how much it mattered to you.”

Shortly after the Buffalo massacre, a bill that would have bolstered federal resources to prevent domestic terrorism failed in the Senate at the hands of Republican opposition. Even at Tuesday’s hearing, Republican senators took the time to focus on the racial injustice protests that took place in the summer of 2020, citing those incidents as acts of domestic extremism.

Since the failed vote, senators have regrouped and began to meet privately in a small bipartisan group headed by Murphy and Republican Sen. John Cornyn, trying to hash out a compromise that could actually become law.

But lawmakers have been here before — unable to pass any substantial gun safety laws in decades in the face of steep objections from Republicans in Congress, some conservative Democrats, and the fierce lobbying of gun owners and the National Rifle Association. No major legislation has made it into law since the 1994 assault weapons ban, which has since expired.

The issue for Democrats is that a number of the topics with bipartisan support would likely not have stopped either the shooting in Buffalo or Uvalde. And the ones that gun safety advocates argue would have been met with a deep reluctance from Republicans. One such proposal would raise the age requirement for gun purchases from 18 to 21. Another popular measure among Democrats would have banned assault-style rifles altogether.

Instead, the senators are focusing on incremental policy changes through a system that would send funds and other incentives to the states to bolster security at school campuses, provide more mental health services to young people and possibly encourage states to pursue red-flag laws to keep firearms out of the hands of people who would do harm.

But one thing that lawmakers on both sides of the aisle seem to agree on is that inaction is not an option.

“We know we won’t get it all done at once,” Schumer said Tuesday afternoon. “But the American people want us to get something done and they want to see Republicans do something.”

His counterpart across the aisle seemed to echo the sentiment. “Almost everybody would like to get an outcome,” Senate Republican leader Mitch McConnell told reporters. “I hope we’ll have one sooner rather than later.”