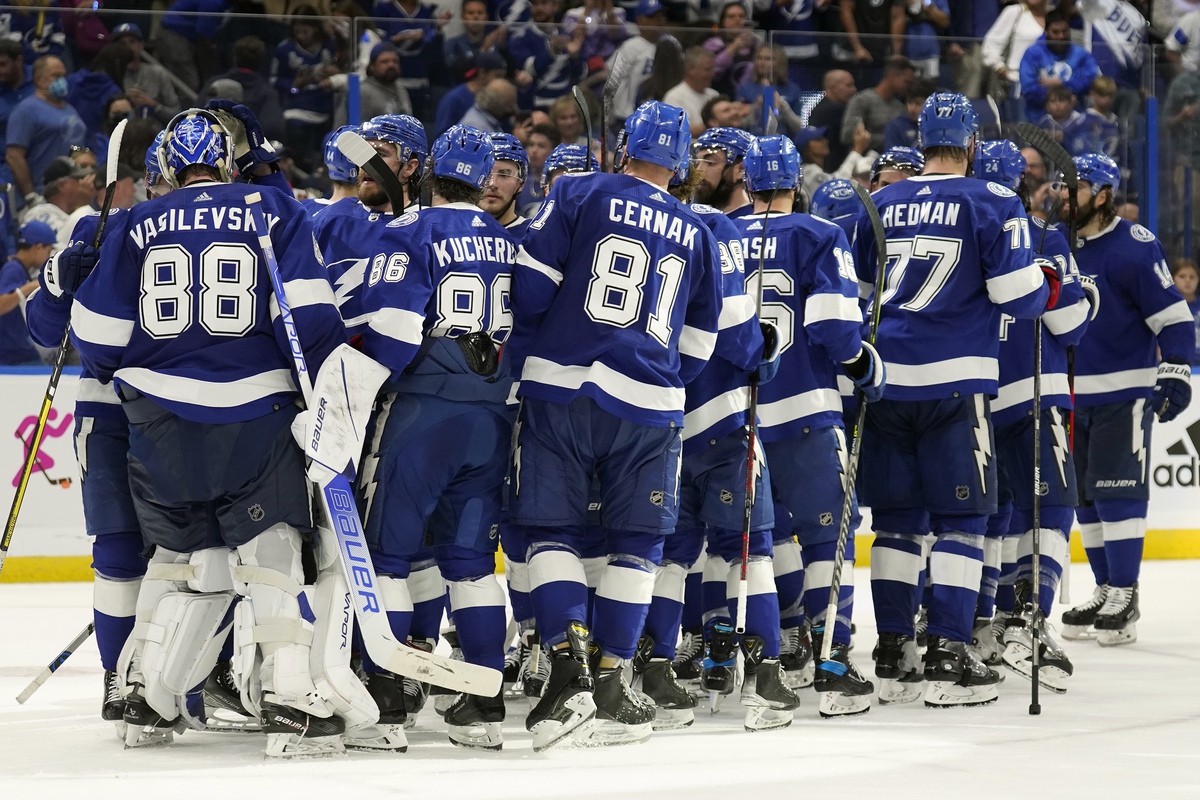 Tampa Bay Lightning goaltender Andrei Vasilevskiy (88) celebrates with his teammates after the team defeated the New York Rangers during Game 4 of the Eastern Conference finals Tuesday, June 7, 2022, in Tampa, Fla.

Kucherov took a pass from Ondrej Palat in the middle of the ice and skated in on goaltender Igor Shesterkin to give the two-time defending Stanley Cup champions a two-goal lead just over 13 minutes into the second period.

Pat Maroon, Steven Stamkos and Palat also scored for the Lightning, who have rebounded from losing the first two games of the series on the road to keep their bid to become the first team in nearly 40 years to win three consecutive Stanley Cup titles alive.

Game 5 is Thursday night at Madison Square Garden, where the Rangers won Games 1 and 2 and are 8-1 this postseason.

Vasilevskiy stopped 28 of 30 shots to win Game 3 and was even better Tuesday night, when he extended a stretch in which he did not give up a goal to nearly 67 minutes before New York’s Artemi Panarin scored on the power play at 16:27 of the third period.

Until Vasilevskiy’s bid for a shutout ended, the Rangers hadn’t scored since Chris Kreider’s power-play goal put them up 2-0 at 9:44 of the second period in Game 3.

It has been all Tampa Bay since then, with Kucherov and Stamkos scoring to wipe out the Game 3 deficit before Palat won it in the final minute.

It was the third goal of the playoffs for Maroon, a 34-year-old, fourth-line forward who’s chasing a fourth consecutive Stanley Cup title after winning with St. Louis in 2019 and signing with Tampa Bay before the following season.

Stamkos’ goal built the lead to 3-0 early in the third period. Palat added an empty-netter with 8.7 seconds remaining, finishing with a goal and two assists.

NOTES: The Rangers played without forward Ryan Strome (lower body), who was scratched after skating in pregame warmups. He was injured Sunday, when he exited in the second period after only playing a little over seven minutes. … New York forward Filip Chytil left just past the midpoint of the second period after a hit by Lightning defenseman Victor Hedman. He missed the rest of the game with an upper-body injury. … The Lightning played for the seventh straight game without forward Brayden Point, who has been out of the lineup since suffering a lower-body injury during Game 7 of Tampa Bay’s first-round victory over Toronto.