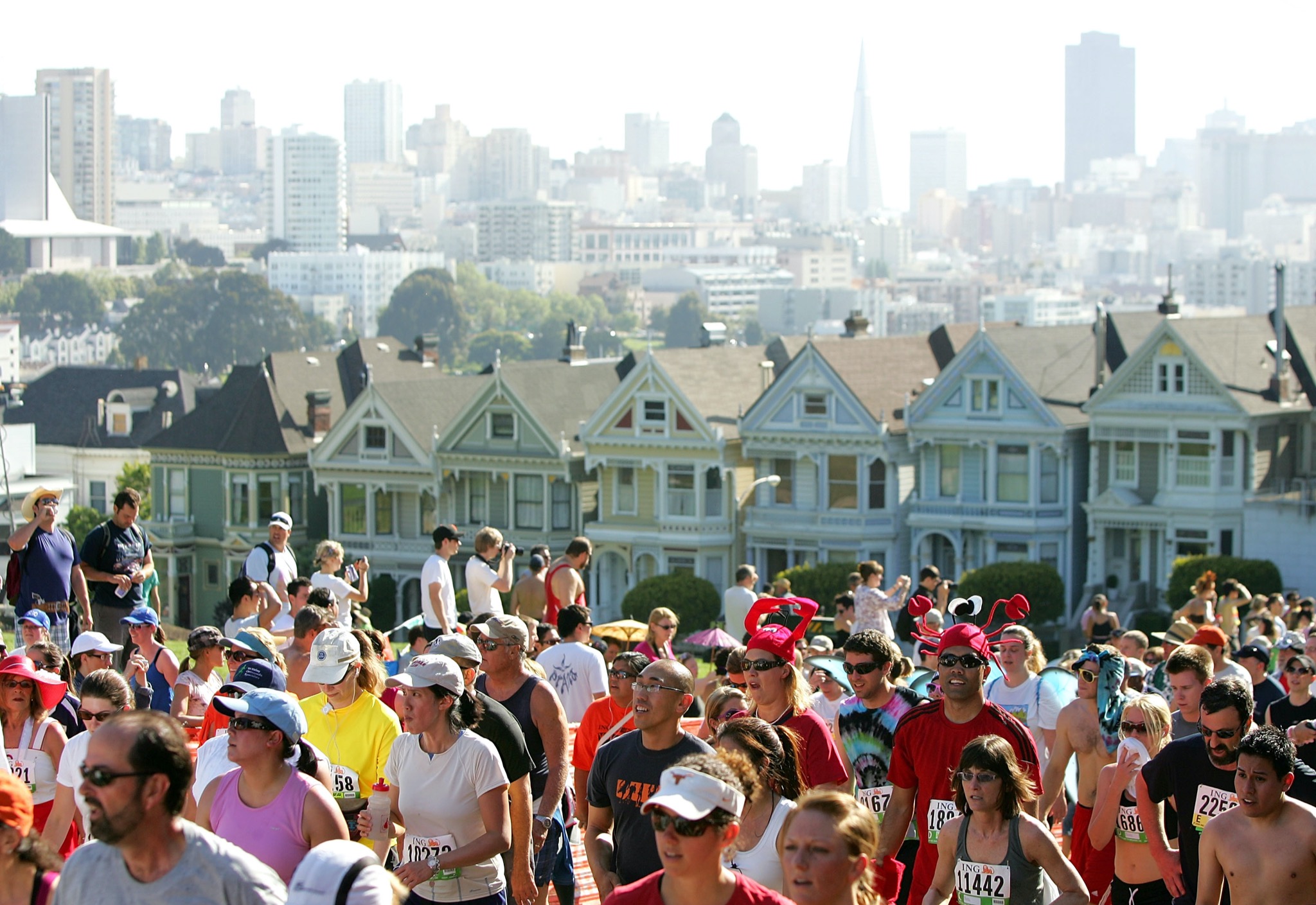 San Francisco’s famed Bay to Breakers footrace is perhaps best known for its zany, welcoming energy. Participants making the 7.5-mile trek are dressed in elaborate costumes or in the buff, power-walkers and stragglers are encouraged to join in and even inebriated runners (though not officially encouraged) can partake in the festivities.

So Bay to Breakers’ decision not to offer awards for nonbinary runners for the competition on Sunday felt a bit odd, even antithetical to the spirit of the 110-year-old event, said Cal Calamia, a nonbinary San Francisco high school teacher registered for the race.

“It’s just really, really sad that something that’s so fun and so exciting — so San Francisco,” they told SFGATE in an interview, “that the love and the inclusivity and the joy could be stifled or taken away from a specific type of person and people like me. It’s really a shame.”

They’re just one of the nonbinary runners who are eligible to compete in a nonbinary category — but ineligible to receive awards, a decision that they say feels like a halfhearted campaign of “performative inclusivity.”

Charlie Mercer, the CEO of the Raleigh, North Carolina-based Capstone Event Group — the organization that holds Bay to Breakers — confirmed to SFGATE that Bay to Breakers will not be offering awards to nonbinary people for this race. On its website, the 110-year-old footrace states that both overall awards and the age group awards will only be presented to the top three male and female runners of each group.

“After every race we aim to make improvements for the following year based on customer feedback,” Mercer told SFGATE in an emailed statement. “We can learn a lot from the Bay to Breakers running community and look forward to finding ways to continue making Bay to Breakers better in the future.”

For Calamia and other nonbinary runners, getting to take part in a nonbinary division — one that comes with the same incentives as men’s and women’s divisions — means not only feeling included, but getting to take space in a sport that, up until recently, has made nonbinary people feel invisible.

Calamia reached out to Capstone in October 2021, back when they first registered for the race, to radio silence. They only heard back a couple of weeks ago with little remorse. The experience, for them, felt immensely demoralizing.

“I’ve been looking forward to this race for a long time,” Calamia said. “Everyone that knows me will tell you that I have been training. I’ve gone over to Hayes Hill. I’ve been running, practicing, just really looking forward to this, getting amped up … to find out that when I finally get back from them, they’re not budging at all to recognize the harm that’s being done to nonbinary and trans folks in the running community and queer people in general and the bay in general.”

Other prominent marathons and long-distance races, including the New York City Marathon and the Philadelphia Distance Run, have begun to fully embrace nonbinary runners — introducing new categories with separate awards for them.

And the operators of these races — often based locally and embedded within their local running circles — say that embracing nonbinary runners is not too big a lift for most races, especially now that the tide is shifting across the industry.

“For us, at the time, it seemed it seemed like a really easy way to make people feel comfortable,” Ross Martinson, a co-owner of the Philadelphia Distance Run, told SFGATE, “and make it clear, like hey, sign up for this race as whoever you are and run as whoever you are.” (He also thinks of Bay to Breakers “more as a fun party” than a hypercompetitive race.)

Zackary Harris is an elite runner who’s gotten to run in nonbinary divisions. Harris, a law student in New York, was the first nonbinary runner to win top honors at the New York City Marathon. (That marathon began offering a separate nonbinary runner division — with an award — in 2021.) As a student at UC Berkeley, they said, they felt empowered for the first time to run after feeling ostracized in their small-town Missouri cross-country team.

“I built up some courage to like start doing things that I used to find joy in that were kind of taken away from me,” Harris said.

To be able to participate in races as a nonbinary person has not only helped Harris, but allowed them to run harder, become more invested in the sport and feel empowered as an elite athlete — especially after taking home New York City Marathon’s first nonbinary award.

“I think for me, after doing the New York City Marathon, it reinspired my running in a way because over the years I’ve had to just always try to like swallow that,” they said. “I have to sign up with like the men’s category because that’s what most people would assume that I am, and so it felt really empowering.”

Of Bay to Breakers’ decision to let nonbinary runners participate but not award them, Harris says the decision feels like a “symbolic gesture” without the full weight of “celebrating their inclusion within the sport.”

“It’s a crucial component of any running organization that’s trying to create a nonbinary division,” they said. “They have awards and make sure that the division is on par with the men’s and women’s divisions that they’ve invested time and resources in.”

Calamia, the San Francisco runner, felt especially let down knowing that these decisions are being made by an entity that operates largely outside of the San Francisco Bay Area, without the familiarity of the region’s culture and emphasis on inclusion. On Thursday, the San Francisco Chronicle reported that Capstone’s chairman, John Kane, donated thousands of dollars to conservative legislators like controversial Florida Rep. Marjorie Taylor Greene and former President Donald Trump. (SFGATE and the Chronicle are both owned by Hearst but operate independently of one another.)

“There’s a disconnect that exists when you have people across the country, in the Carolinas, that are managing this race, that are making decisions for people in San Francisco,” they said. “San Francisco in particular is often a pioneer of social change in a lot of ways. Having people somewhere else calling the shots for a community that they may not even understand, that’s something that’s … concerning.”

Many things have changed for Bay to Breakers since the inaugural run in 1912. After all, it wasn’t until 1971 that women runners were allowed to participate in this race.

“I think things are heading in the right direction,” Martinson said. “I don’t know. Sometimes I think that I feel like things aren’t going fast enough.”