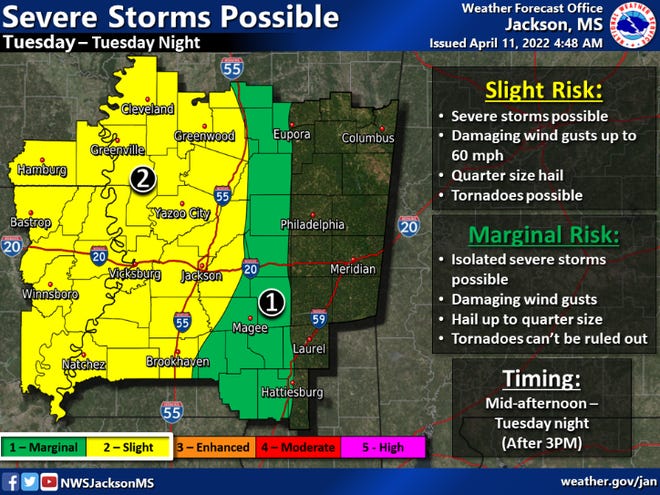 Severe weather is possible Tuesday afternoon through Wednesday in Mississippi, with the main threats being tornadoes, hail, damaging winds and flooding.

From mid-afternoon through Tuesday night, Jackson is under a slight risk and Hattiesburg is under a marginal risk of severe weather.

Cities along and west of I-55 have the greatest chance for storms that could produce damaging wind gusts, quarter-size hail and tornadoes, according to the National Weather Service in Jackson.

From afternoon through evening Wednesday, Jackson is under an enhanced risk and Hattiesburg is under a slight risk of severe weather.

For Jackson and central Mississippi, severe storms are likely that could produce winds of up to 70 mph, golf-ball-size hail and tornadoes.

Hattiesburg is at risk of storms that could produce 60 mph winds, quarter-size hail and tornadoes.

Flash flooding is possible for much of the state Wednesday due to potential rainfall amounts of 2 to 3 inches falling in a short time frame.

The latest severe weather threat comes after the state has experienced an extremely active start to its tornado season with at least 69 tornadoes reported in Mississippi since March 22, according to the National Weather Service in Jackson.