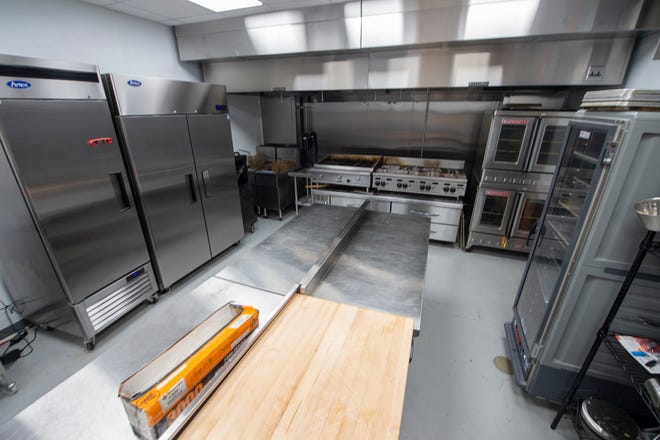 His business is always on the go, but he needed a place to store his dough. Welch was able to launch his business quickly by using the shared kitchen at Ecoshed, a coworking space that opened last year in an industrial park between Fondren and Vidren Addition in Jackson.

“You need freezer space, you need refrigeration, you need a place to put 10 50-pound bags of flour,” Welch said. “Ecoshed is invaluable. As far as I know, there isn’t any other infrastructure where folks can pay as they go.”

Ecoshed offers coworking space, where people pay for a place to work or even rent a full office. The airy space in a former pipe distribution facility has a contemporary decor, with perks like an espresso machine. The full commercial kitchen, however, is an unusual feature for a coworking space, and lets food entrepreneurs such as Welch launch a business with less initial investment.

Welch said he spent about $6,000 to launch Poppy Pies, which includes the cost of the portable ovens that can reach 1,000 degrees. By using the Ecoshed commercial kitchen, he saved start-up costs and the time it would take to build his own facility.

The rates to rent the Ecoshed commercial kitchen range from $500 to $2,500 a month, depending on how much the business uses the space.

“We do all the things that our current generations have lost with the advent of refrigeration and preservatives,” Jackson said. “I learned to make these products from my grandmothers.”

Jackson, under Mississippi’s cottage food law, was able to use her home kitchen, but she had to sell her goods directly to customers at places like farmers markets.

When the COVID-19 pandemic hit, Jackson lost other sources of income and decided to turn Ms. T’s, her side business, into her main focus.

By using the licensed commercial kitchen at Ecoshed, Jackson can move beyond the cottage law restriction and sell her goods wholesale to stores. Currently, her preserves are available at the gift shop at Mississippi Museum of Art, where large jars of pickled items she made have been incorporated into a piece in the new exhibit “A Movement in Every Direction: Legacies of the Great Migration.”

“Some of our members have lots of experience. Some have very little and just a dream,” Higginbotham.

Fertile Ground Farms, a quarter acre chemical-free urban farm, is also located on the Ecoshed property. Some of the food entrepreneurs at Ecoshed use produce from Fertile Grounds.

Ecoshed opened in the middle of the COVID-19 pandemic not long after vaccines became available. Many of the early users were eager to get out of their home offices. Others, including Welch of Poppy Pies, decided to start new ventures after their lives were upended by pandemic shutdowns.

The roughly 60 members who use the Ecoshed’s office space include lawyers, DJs, graphic designers, marketers, a yoga instructor and the founder of Jackson Flea, a monthly flea market held in the courtyard of the Ecoshed.

“There’s an opportunity for cross-disciplinary collaboration and sharing of ideas when you’re in proximity to each other,” Higginbotham said. “It’s very hard to get things done when you’re in silos.”