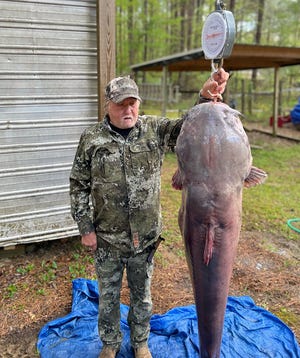 When a Mississippi man set out on the Mississippi River for a day of catfishing on April 7, he couldn’t have imagined he was about to land a 131-pound blue catfish that not only set a new state record, but possibly a world line class record.

“I was fishing below Natchez,” said Eugene Cronley of Brandon. “I was using a cut-bait called a skipjack.

“We went and set up. I probably wasn’t on the water five minutes since the first cast.”

Cronley was fishing in a 90-foot hole when his rod bowed over.

“He hit the rod and started pulling drag,” Cronley said. “We had to untie the boat and float down the river.

“I couldn’t move him. I’d pull on him and take in a foot of line and he’d pull and take 10 feet. I just sat there like I was hung up.”

Cronley said he knew the fish was big, but had no idea how big.

“We catch a lot of 50-pounders down there and I knew he was bigger than that,” Cronley said. We didn’t know until we pulled him up. We knew then we had a monster.”

Between the 30-minute battle and landing the fish, Cronley was feeling the fatigue.

“We could hardly get him in the boat,” Cronley said. “I was wore out.”

‘Slap full of crappie’:Expect long spawn, big fish and lots of them at Barnett Reservoir

Subscriber exclusive:He’s at it again: This buck in a Mississippi deer study just won’t stop traveling

How big is it?

Guesses on the fish’s weight ranged from 125 pounds to 175 pounds. When he got home, his uncertified scale indicated the fish weighed 138½ pounds, smashing the existing state record of 95 pounds. The fish was 56.6 inches long with a girth of 41 inches.

“Those pictures don’t do him justice,” Cronley said. “He is a monster.”

The problem with catching a ‘monster’ is finding certified scales that can handle it, which is required to have a fish declared a record.

“You can’t believe how hard it is to find certified scales to weigh a catfish that big,” Cronley said.

After the fish had been iced down for three days, Cronley took it to Van’s Deer Processing and Sporting Goods in Rankin County which had a suitable certified scale. The fish weighed 131 pounds. Cronley said the fish lost weight because it had been on ice for three days.

However, because of the length of time since the scale was certified, Mississippi Department of Wildlife, Fisheries and Parks biologist Ryan Jones asked for the scales to be checked and certified again.

On Monday he confirmed the scale was accurate.

“We’re good to go,” Jones said. “The scales are certified.”

With that, Cronley had the state record, but the confirmation also opened up the possibility of the fish toppling a world record.

Ouch!:How to keep mosquitoes away from your home: What works, what doesn’t

The current world record for a blue catfish caught on 30-pound test line is 111 pounds. There are other requirements to be considered, but according to IGFA’s Jack Bellapigna, angler recognition coordinator, the line sometimes creates a problem.

Bellapigna said some lines are stronger than the rating on their labels. So, the organization needs to test Cronley’s line to verify it’s in the 30-pound class.

“The requirement that comes into play is the line would need to break under 33.06 test strength,” Bellapigna said.

Cronley said having a state record hasn’t really sunk in and the possibility of a line class world record seems almost unimaginable.

“That’s unreal,” Cronley said. “I’ve been catfishing all my life and I never dreamed of something like this.”