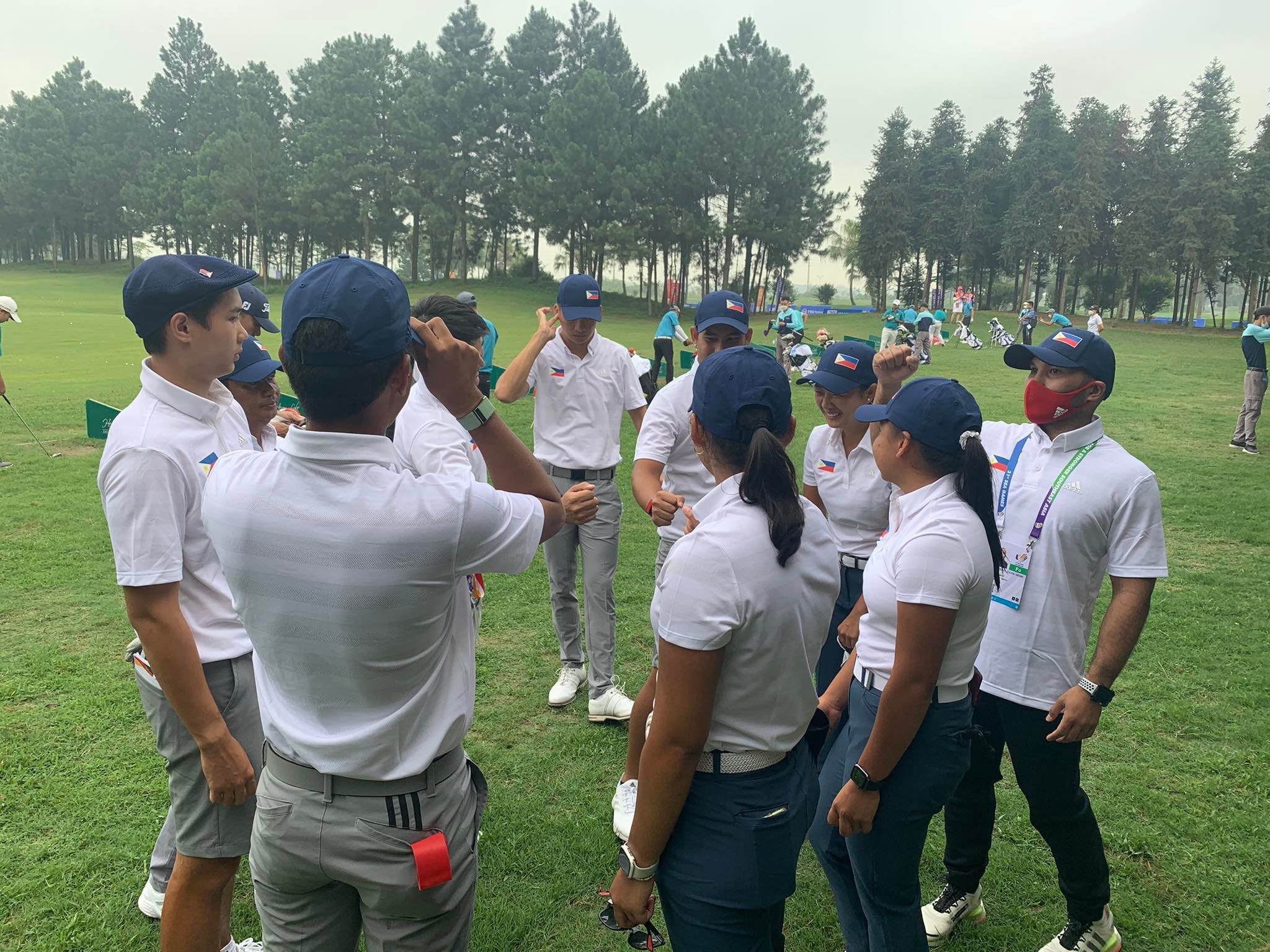 The national golfers huddle before the start of their round.—JONG ARCANO

HANOI—As Thailand flexed its might right from the get-go with five of its seven players in both divisions breaking par, Philippine bets fell into a series of misfortunes on a demanding course to fall into big deficits after Friday’s opening round of golf competition in the 31st Southeast Asian (SEA) Games here.

Rianne Malixi took a double bogey on the first hole at Heron Lakes Golf Course and Resort when her approach got stuck in a tree and needed to replay her tee-shot; Mafy Singson bogeyed two of her last three while Lois Kaye Go bogeyed five of her first six holes that did not help the Filipino women keep pace with the torrid scoring assault set by their Thai rivals.

The three Filipinos wound up with similar four-over-par 76s to share ninth place and will tee off in the second round of the individual event on Saturday nine strokes behind Thai joint leaders Eila Galitsky and Natthakritta Vongtaveelap, who fired 67s despite the tough course conditions that had the field tackling rain-sogged fairways, very slow greens and blustery winds.

Go, part of the PH gold medal-winning teams in the Jakarta Asian Games in 2018 and the SEA Games the country hosted the year after, made the best recovery with three birdies over a four-hole stretch in the back nine and could have positioned herself higher if not for a sorry bogey-bogey finish.

“It wasn’t the start we wanted, but we just have to look forward to playing a good round tomorrow,” said Go, who will fly to the United States after the event to take another crack at the pro ranks.

The men’s division bets also had their share of their Friday the 13th woes as three of them ended up bunched at 13th spot after getting hit by bad breaks in their identical rounds of 74.

Jed Dy, his tremendous length off the tee in harness, carried an even par card through 16 holes but bogeyed the last two holes, Gab Manotoc missed birdie opportunities on the last four when the winds picked up even more, and Jet Hernandez bungled at least six makeable birdie opportunities that could have brought him closer to the front-runners.

They fell six shots back Thai leader Weerawish Narkprachar, who went bogey-free in a round of 68. Hiroshi Tai came in with a 69 at mid-afternoon to take second place while another Thai, Pongsapak Laopakdee and Amdeus Susanto of Singapore were tied at 70. Thai prodigy Ratchanon Chantananuwat had a 71 like Ming Nguyen of Vietnam and Ryan Ang of Singapore.

The fourth player of the PH team, Kristoffer Arevalo, could do no better than a 78 marred by a double-bogey on the 10th. Arevalo was complaining of pain on the lower hip before he went to sleep on Thursday.

The 18-year-old Dy, son of the Ayala Land CEO, hit 11 greens but couldn’t get his putter to save him the strokes he badly needed. “I was hitting the ball well, but time and again there was mud on the ball so it affected the way I judged my distance,” he said.

National team coach Miko Alejandro said that his wards know the importance of tomorrow’s round.

“We got hit by some bad breaks today but it’s all fair game, our players just have to look forward to bouncing back in the next round,” said Alejandro.

So overpowering were the Thais that all but one of their four players cracked par, with their fourth man, Arsit Areephun, matching par.