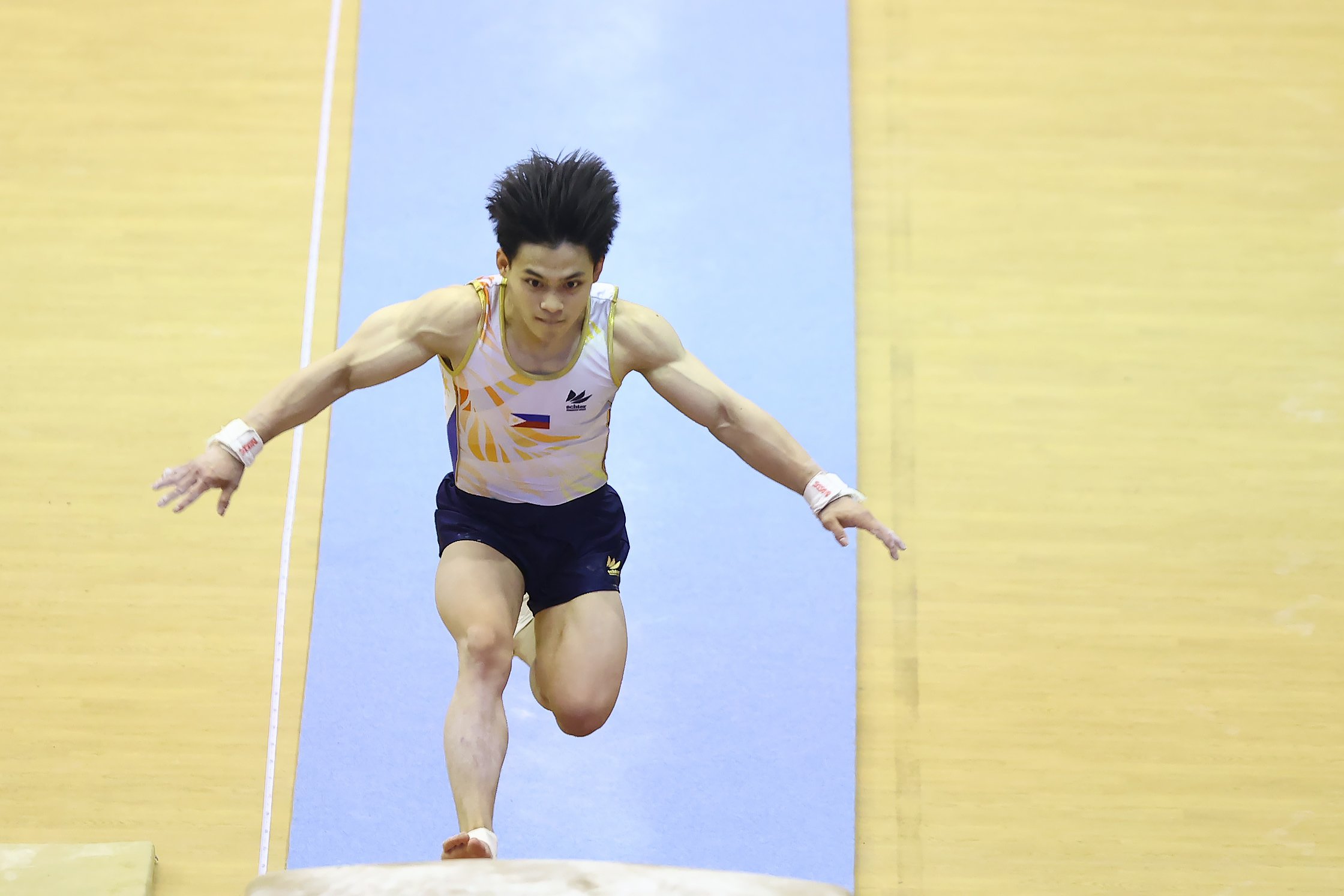 Carlos Yulo will still have a shot at golds in six apparatuses in the gymnastics event. —CONTRIBUTED PHOTOs.

HANOI—Carlos Yulo delivered on a promise nobody expected he would break. Up next, his fellow Olympian takes a turn at the spotlight.

The two-time world champion gymnast bagged the gold medal in the men’s individual all-around and powered a Philippine squad to a runner-up finish in the team event on Friday in the 31st Southeast Asian (SEA) Games at Quan Ngura Sports Palace here.

“All I’m thinking is how to perform well and I think we did well,” said Yulo, who is also eyeing golds in the parallel bars, floor exercise and vault in the next few days. His all-around results also qualified him to the finals of all six apparatuses on Sunday and Monday.

“It’s not a bad first day at all,” said Gymnastics Association of the Philippines president Cynthia Carrion, who predicted four golds from the Tokyo Olympian. “Yeah, we are expecting more, so much more actually.”

A lot of expectations will also fall on the shoulders of star pole vaulter and Asian record holder EJ Obiena, who leads an athletics squad that plunges into action on Saturday at My Dinh National Stadium.

Javelin’s Melvin Calano and sprinters Kayla and Kyla Richardson will join Obiena as athletics shoots for a repeat of its dominating performance in the 2019 edition of the biennial meet back home.

“The chances of the entire Philippine team looks good, the prospect is also good and the whole team is feeling positive,” said coach and athletics team spokesperson Joeffrey Chua. “It is because we are prepared, we started our preparation last October nonstop. October, November then we completed our first competition last December in Baguio.”

On Friday, Yulo owned the stage though, along with Jackielou Escarpe, who won the gold in the men’s -73-kilogram division of Kurash, a martial art very similar to wrestling.

Yulo helped the men’s squad, also composed of Juancho Miguel Besana, John Matthew Vergara, Jann Gwynn Timbang and Justine Ace de Leon to the lead in the morning session with 301.600 points, before Vietnam stormed past them in the afternoon session to grab the gold with 321.250 points. Singapore placed third with 297.650.

The country also went off to a flying start in tennis with the men’s and women’s teams blasting their way to the semifinals at Hanaka Sports and Service Center.

The national squads will battle the Thailand teams in both sides for the right to make the final round on Saturday.

Then later in the day, Marian Capadocia and debuting teenage hotshot Alex Eala finished their singles assignments to register a 2-0 victory over Malaysia.

“This is a great start for us, hopefully, we hurdle the Thais who also have tough teams,” said national head coach Chris Cuarto.

Volleyball started with the much-fabled women’s squad producing a straight sets victory over Malaysia over at Quang Ninh Gymnasium.

But the basketball 3X3 squads encountered resistance over a field it bounced around in 2019. The men’s team lost to Indonesia, 13-15, after easy victories over Cambodia (19-7) and Thailand (21-16).

The women’s side likewise got blindsided, 21-18, by host Vietnam, which is powered by sisters Kayleigh and Kaylynne Trung, who both played for NCAA Division 1 team Gonzaga University. After beating Cambodia (19-7), the Filipinos also lost to Thailand (21-14) for a 1-2 record.

The Philippines has so far collected three golds medals, seven silvers and 11 bronzes for fifth place in the medal standings as of 8 p.m. Friday.