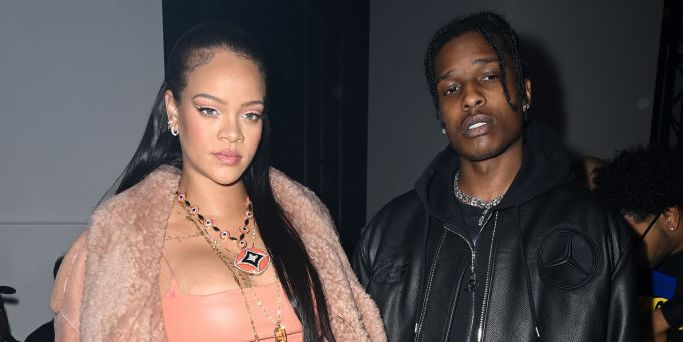 Rihanna and A$AP Rocky arrived in Barbados on Friday, visiting the rapper’s family together and looking very much in love. In a video shared by TMZ, they can be seen walking side-by-side through the airport terminal as A$AP wraps his arm around his girlfriend’s waist in a moment of sweet PDA.

This past week, the couple has been caught up in rumors of cheating, which have since been refuted. It began with a tweet from fashion blogger Louis Pisano. Pisano has since recanted his statements, in which he said A$AP Rocky was having an affair with popular shoe designer Amina Muaddi, who has frequently worked with Rihanna. The beauty mogul is often photographed wearing Muaddi’s designs, so she obviously knows the couple. She took to her own Instagram to deny the accusations.

She wrote, “I’ve always believed that an unfounded lie spread on social media doesn’t deserve any response or clarification, especially one that is so vile….I initially assumed that this fake gossip—fabricated with such malicious intent—would not be taken seriously.”

Muaddi added, “However in the last 24h I’ve been reminded that we live in a society that is so quick to speak on topics regardless of factual basis and that nothing is off limits. Not even during what should be one of the most beautiful and celebrated times in one’s life. Therefore I have to speak up as this not only directed towards me but it is related to people I have a great amount of respect and affection for.”

Rihanna and Rocky are expecting their first child together, and have been out and about a lot ever since revealing the singer’s pregnancy as she models her incredible maternity style. But they’re rarely so demonstrative in public.

The Best Basics to Buy From Nordstrom’s Half-Yearly Sale

What Exactly Is a Sustainable Fabric? 8 Experts Spill

I Live in Jeans—Check Out These 6 Nordstrom Denim Brands