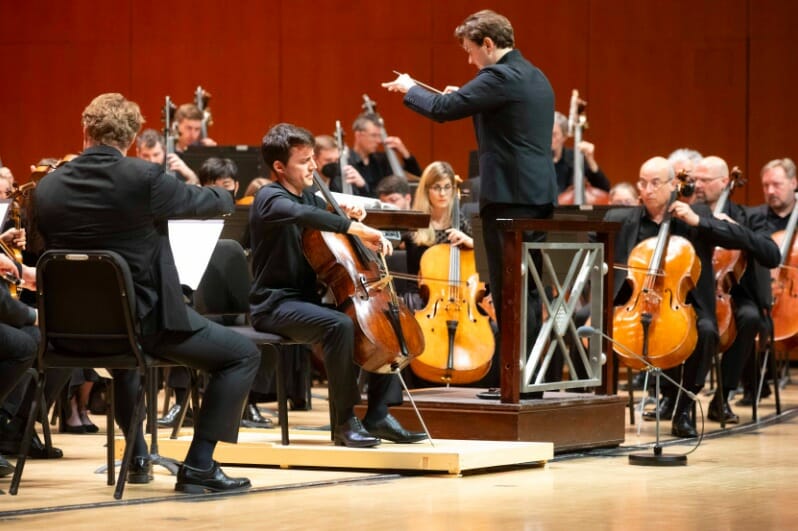 It’s easy to get hooked on Anna Clyne’s music. The Atlanta Symphony Orchestra is now on that satisfying path.

The British composer, still young at 42, has written several small masterpieces that are being performed widely, including a moody, emotion-charged concerto for two violins called “Prince of Clouds” and an intense, understated, sorrowful memorial for her late mother, “Within Her Arms.” Clyne’s every new piece holds the promise to be something really special.

Thursday in Symphony Hall, the ASO played Clyne’s “Sound and Fury.” (Next February, the ASO will also perform Clyne’s flowing “The Midnight Hour.”)

“Sound and Fury” feels shorter than its 15 minutes, in part because it’s in constant, swirling motion. From the start there’s great vitality from the orchestra, with little tornadoes of activity passed around the stage. The music is in six connected parts and has an absorbing, stream-of-consciousness feel, carrying the listener along. There is too much going on to call this a piece of minimalist art, yet somewhere in the middle you feel the music might be on a loop, or moving in blocks of sound.

In her program note, the composer says she was inspired by two sources related to its 2019 premiere with the Scottish Chamber Orchestra: Shakespeare’s Macbeth (for obvious reasons) and Haydn’s Symphony No 60, nicknamed “Il Distratto,” which shared that program with “Sound and Fury.” In the music, she quotes bits from the Haydn, which has the same aesthetic as handsome antique furniture in a modern house. It’s all charming.

Near the end, over loudspeakers, we heard a voice (the composer’s?) intone the famous final soliloquy from Macbeth that begins “Tomorrow, and tomorrow, and tomorrow.” The problem was that the orchestra, under guest conductor Alexander Soddy, was entirely too loud. From my seat, I could barely make out the text, till the composer has the orchestra calm down on the words “It was a tale told by an idiot, full of sound and fury, signifying” — long pause — “nothing.”

Soddy, an English conductor who specializes mostly in opera and mostly in Europe, was given works by two English composers for his ASO debut. The Clyne came off reasonably well on first hearing. But the way he handled the older, familiar works on the program suggested he probably left unexplored a lot of what the Clyne piece holds.

After intermission, we heard Sir Edward Elgar’s Enigma Variations. It’s music that seems to capture an entire slice of history and culture. I’m no political scientist, nor do I know much about the strange mass-psychology that connects nationalism with masochism and xenophobia. But it seems that the Enigma Variations, and similar works of English grandeur, helps explain why naïve, nostalgic Brits voted for Brexit. Since Brittania once ruled the seas, the sunsets, and a lot of people in far-away lands, the confident little island imagined it could again be the master of its own destiny by unhitching from Europe. Nevermind the logistics.

Like the majestic Enigma Variations, composed at the height of empire in 1899, today’s popular entertainments have reinforced these now-faded ideals of English pomp and power, from Merchant-Ivory films to small-screen dramas such as Downton Abbey and — now that hip Pakistani restaurants serve the best food in the country — the multi-ethnic Bridgerton. But the impulse is to always revel in the glories of empire.

As a set of 14 variations on a still-mysterious theme (hence an “Enigma”), each short section is a musical impression of a family member or friend from Elgar’s social scene, labeled with the person’s initials. It’s not a paradox that the most personal of pieces actually seems to embody, to our ears, the sound of Great Britain. Elgar, a piano-tuner’s son who married into the English upper class, was writing on a big canvas that spoke to his nation.

Unfortunately, conductor Soddy made a mess of most of it. It all looked great, as if Soddy were conducting the Last Night of the Proms, with a raised head, noble posture and grand gestures. But anytime the orchestra, mostly unchecked and blowzy, rose above mezzo-forte the sound turned to sonic mush.

Or, speaking of mass psychology, perhaps the orchestra itself was the limiting factor. Without a functioning music director, approaching the end of a long and emotionally draining season, and with a substitute teacher on the podium, the musicians were like rascally school kids. If no one told the brass to play quietly, why should they? If entrances and big chords weren’t properly lined up, who was going to fix it? For all the joys of music-making, it must be hell to be a young guest conductor, working with an orchestra for the first time in an acoustically crappy hall, and the players themselves aren’t really into you or especially invested in your program.

This argument — a talented but inexperienced conductor, an orchestra lacking self discipline — is persuasive because everyone played beautifully when it really mattered to them, for one of their own.

The hero of the evening was Rainer Eudeikis, the ASO’s principal cellist since 2019. He’s a monster player. In Dmitri Shostakovich’s Cello Concerto No. 1, his forceful tone, elegant phrasing and exacting technique showed him to be a complete musician. Soddy offered smart, minimal guidance, and everyone in the orchestra was on the edge of their seat, alert and together and never overpowering their beloved colleague.

Like the best of Shostakovich, the Soviet Union’s premiere composer, the cello concerto is tuneful and a little snarky and loaded with veiled, multidimensional meaning. Eudeikis played the shadowy second movement in tender and loving tones, and the short duet with clarinetist Ted Gurch seemed like a songful lament, or maybe a private confession. Soon the music turns dreamy, with hints of a nightmare lurking somewhere in the back. Under Eudeikis’ fingers, the eerie harmonics near the end were both haunting and somehow innocent, the song of frightened ghosts.

The long solo cadenza is the heart of the concerto, and Eudeikis made it seem abstract and remote, or perhaps emotionally inaccessible. As a personality behind his cello, the only thing he seems to lack is the final measure of high charisma, where you in the audience believe the soloist is speaking directly and specifically to you. Perhaps because of its insane difficulty, in this cadenza Eudeikis played perfectly but kept mostly within himself for his interpretation.

Those solo musings are ripped apart in the turbulent finale. When Ted Gurch’s clarinet returns he’s no longer the cellist’s loving companion but a slippery devil, a harbinger of oppression and maybe death.

The ASO and their principal cellist delivered it all brilliantly, a large ensemble breathing and playing as one. It’s sad news for Atlanta that Eudeikis is departing for the San Francisco Symphony in the fall. As we’ve said before, the ASO will finally kick up to a higher tier among U.S. orchestras when it can retain its best players, when the ASO itself is the destination.

The program repeats Saturday at 8 p.m.