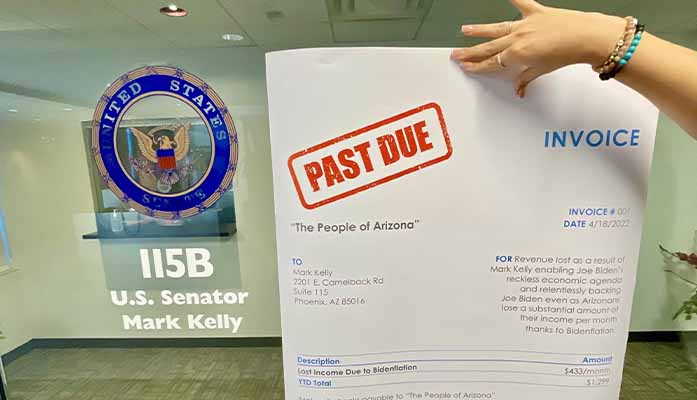 On Monday, a group of Republicans reminded Arizona Democrats that it was Tax Day by sending invoices reflecting their lost income due to the “Biden administration’s inflation” to Democrat incumbent Congressmen including Mark Kelly, Tom O’Halleran, Greg Stanton and Ann Kirkpatrick.

The Republican activists say they are “stuck paying the price of the worst inflation in the country while simultaneously feeling the pain at the pump from the highest gas prices in state history.”

Arizonans are on track to pay $7,721 more for the things they buy on an annualized basis due to Bidenflation. Inflation costs last month alone amounted to $643 in Arizona. A new Joint Economic Committee report revealed how inflation sent prices surging since Biden took office in January 2021.

The Wall Street Journal recently covered the impact of Biden’s inflation tax on Arizonans and how inflation has been turning swing voters against Democrats.

The GOP says it is drawing attention to what they believe is Joe Biden’s “mishandling of inflation” by delivering these invoices, labeled “PAST DUE”, because they claim the Arizona Democrats including Kelly, O’Halleran, Stanton and Kirkpatrick have repeatedly refused to stand up to Biden on behalf of Arizonans. One Democrat, Tom O’Halleran, even said “inflation is not out of control.”

support for Darwin, and a metallic standard