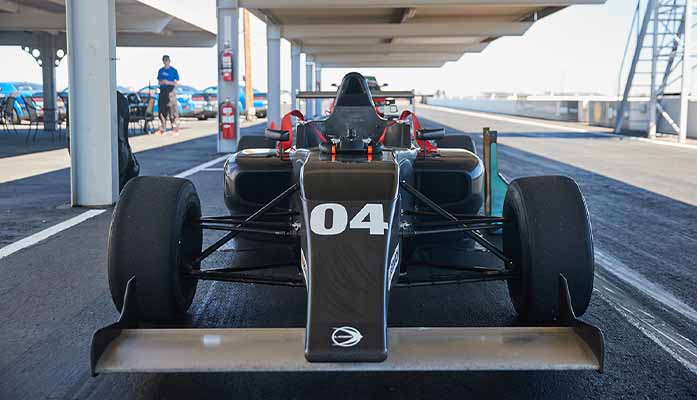 CHANDLER – Engines roar, tires squeal and rubber burns at the Radford Racing School, where drivers learn to handle a range of cars used in professional and junior racing categories.

Students who come to Radford have the opportunity to drive cars such as the Dodge Challenger SRT Hellcat, Lotus Evora GT and Ligier JS F4.

The FIA and the Sports Car Club of America in 2016 selected the Ligier JS F4 as the exclusive model for the Formula 4 U.S. Championship. The Formula 4 category helps drivers take the first step from go-karts to single-seat race cars.

Brett Barnard, who attended the four-day school with his son over spring break, said the most exciting thing about driving the F4 cars is how strikingly different they are from commuter cars.

Radford’s F4 cars have a carbon composite monocoque and are powered by a 2-liter Honda engine, which can produce about 160 brake horsepower.

“There’s no windscreen in front of you; you can see the tires in front of you lock up, how they’re moving,” Barnard said. “When you get in the Formula 4, you feel everything, you’re feeling every gearshift you do, every breaking you do and how you turn, and if you’re doing it wrong, you know.”

His son, Cole Barnard, said the F4 driving experience was unlike any he’s ever had.

“It’s open-wheel, you’re down just sitting 2 inches off the ground,” he said. “It’s like high-def driving, there’s nothing in front of you besides the road.”

The only thing shielding the drivers from the wind is their helmet and race suit.

The Barnards and a third student, CJ Enns of Canada, spent the morning of their final day at the school learning about the differences between the Ligiers and the Dodge Challengers they drove on the first three days. They drove F4 cars that afternoon, following an instructor on the track.