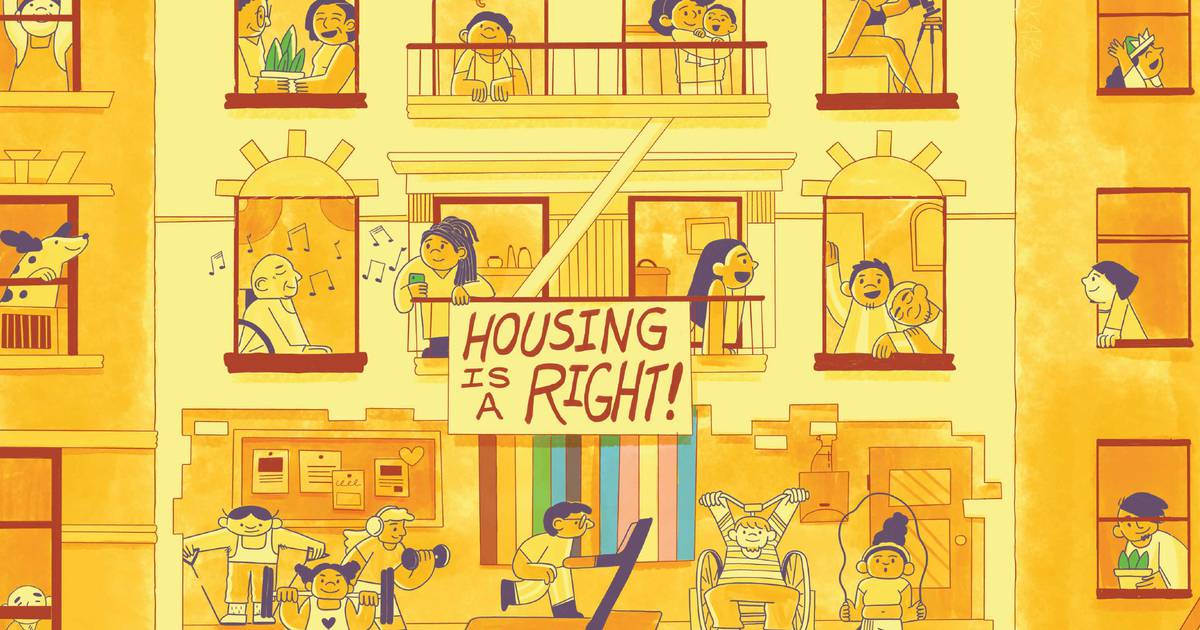 Six left-leaning members of the City Council are teaming up with a group of visual artists to launch a citywide art campaign calling on Mayor Adams’ administration to earmark more funding for housing and other social services in this year’s municipal budget.

The “Futures NYC” campaign, which features brightly colored posters and videos made by six local artists, will be unveiled at a press conference in City Hall Park on Thursday morning.

The initiative is then bound for a citywide tour, with popup exhibits of the artwork planned in public spaces across the five boroughs in coming weeks. The pieces will also be showcased on social media, according to the campaign’s organizers.

“New Yorkers deserve a just, equitable budget, and they deserve a city that actually invests in them,” said Brooklyn Councilwoman Sandy Nurse, one of the six members participating in the effort. “The Futures NYC initiative shows our administration and our people what’s possible — and it should move all of us to action. These art pieces are a form of communication and activism that should be all over the city.”

Joining Nurse in rolling out the project are fellow Democratic Council members Tiffany Caban of Queens, Shahana Hanif of Brooklyn, Shekar Krishnan of Queens, Rita Joseph of Brooklyn and Chi Ossé of Brooklyn. They are coordinating the initiative with advocacy groups Make The Road NY, VOCAL-NY and Hester Street.

The artworks, which were shared with the Daily News ahead of Thursday’s event, portray social realist-like scenes of city life, many of them with a focus on housing and criminal justice.

One video montage, made by illustrator Rashin Kheiriyeh, depicts a homeless man sleeping on a city street with a newspaper for a blanket. The frame then begins to shake and the man is teleported into a bed inside of a house with a façade adorned with a banner reading “Supportive Housing For All.”

Another piece in the exhibit, a poster drawn by artist Yuko Okabe, shows a school bus with prison bars for windows that are being pried open by children inside, with the words “Restorative Justice In Schools” emblazoned on the side of the bus.

The public art push comes as the Council remains at loggerheads with Adams’ team on key budget issues, including housing, which has turned into a major sticking point in negotiations.

Adams proposed in his latest executive budget draft last month to boost annual city spending on affordable and public housing by $500 million for a total of $2.5 billion — $1.5 billion short of his campaign promise to set aside at least $4 billion per year for the issue.

At the same time, Adams’ proposal floats an increase in funding for the NYPD and the Department of Correction, raising eyebrows from progressive Democrats in the Council who want to see social spending prioritized in the budget.

“The administration will remain focused on building and maintaining affordable housing, caring for the most vulnerable New Yorkers, and building an equitable recovery,” Allon said.

Bronx Councilwoman Pierina Sanchez, who heads the Council’s Housing Committee, said at a press conference earlier this week that Adams’ proposed $500 million spending bump on housing is “a step in the right direction.”

But, she added, “We want to continue to see those steps.”

The Council and Adams’ team will continue negotiations over coming weeks before a final budget plan must be adopted by July 1.