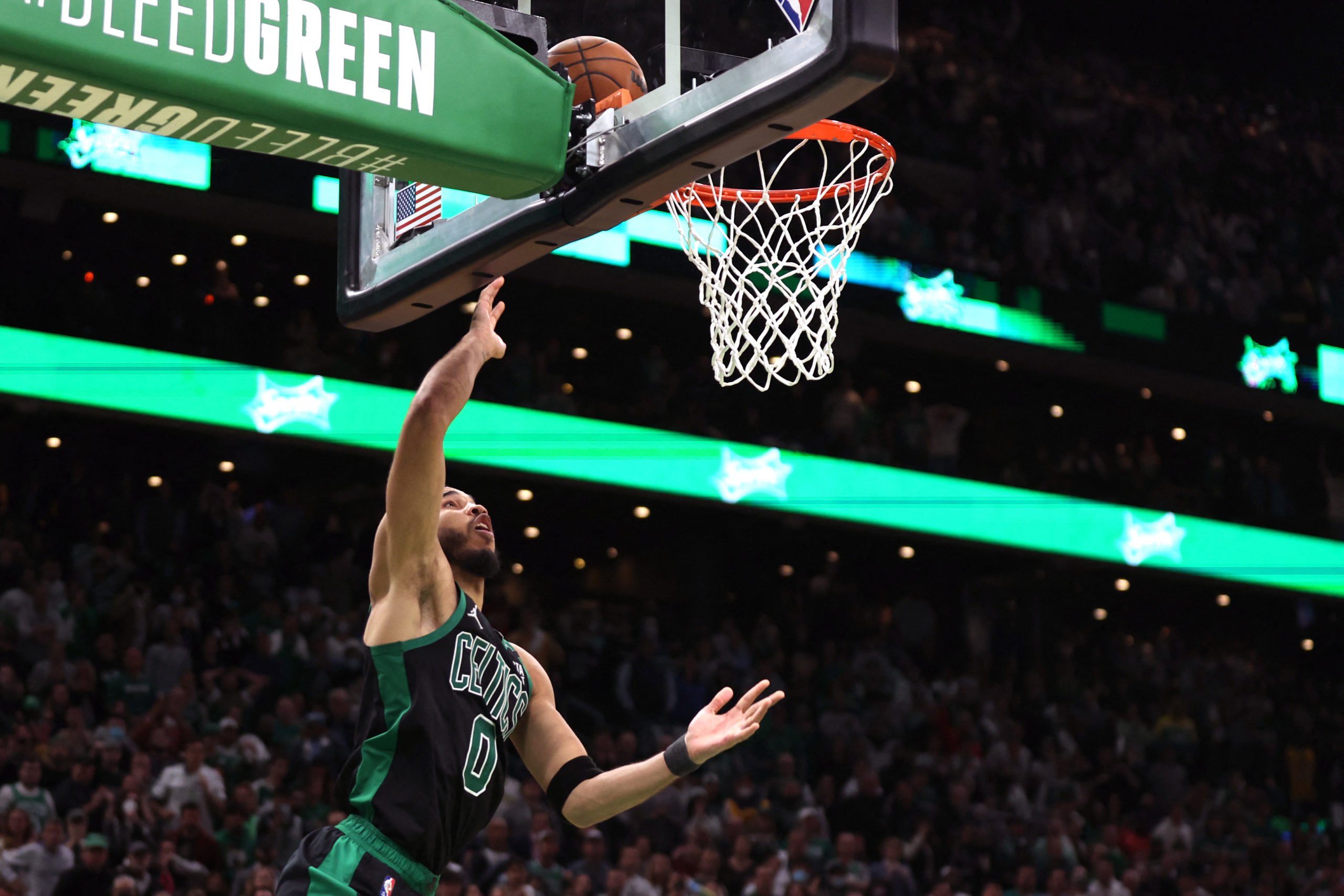 Jayson Tatum of the Boston Celtics scores the game winning basket against the Brooklyn Nets during the fourty quarter of Round 1 Game 1 of the 2022 NBA Eastern Conference Playoffs at TD Garden on April 17, 2022 in Boston, Massachusetts. The Celtics defeat the Nets 115-114.  (Getty Images via AFP)

MIAMI – Jayson Tatum spun in for a buzzer-beating layup to give the Boston Celtics a dramatic 115-114 victory over the Brooklyn Nets on Sunday in the first game of their NBA Eastern Conference playoff series.

Tatum scored 31 points to lead the Celtics, who thwarted a fourth-quarter comeback bid by the Nets to take a 1-0 lead in the best-of-seven series.

Tatum added eight assists and two blocked shots, Jaylen Brown added 23 points and Al Horford and Marcus Smart scored 20 apiece for Boston, who took a 96-85 lead into the fourth quarter but trailed 114-111 with less than a minute to play. Jayson Tatum of the Boston Celtics celebrates the game winning basket as Kyrie Irving of the Brooklyn Nets looks on during the fourth quarter of Round 1 Game 1 of the 2022 NBA Eastern Conference Playoffs at TD Garden on April 17, 2022 in Boston, Massachusetts. The Celtics defeat the Nets 115-114.  (Getty Images via AFP)

Former Celtic Kyrie Irving, booed throughout by Boston fans who still resent his departure for Brooklyn, led the Nets with 39 points. Kevin Durant was the only other Nets starter in double figures with 23.

Irving will no doubt hear from the NBA after a middle-finger salute to heckling fans in the third quarter, but he saved his best gesture for the fourth period, when he scored 18 points to key the Nets’ comeback bid. Jaylen Brown of the Boston Celtics takes a shot against Kyrie Irving of the Brooklyn Nets during the fourth quarter of Round 1 Game 1 of the 2022 NBA Eastern Conference Playoffs at TD Garden on April 17, 2022 in Boston, Massachusetts.  (Getty Images via AFP)

But the Celtics clamped down defensively and pulled within one on Brown’s driving layup. After Durant missed a three-pointer, Tatum, fed by Smart from across the lane, willed his way through traffic for the game-winner.

A first half that featured 17 lead changes ended with the score knotted at 61-61, but the Celtics, who had been idle since their last regular-season game as the Nets battled through the play-in tournament, pulled away with a 39-24 third quarter.

“Our aggressiveness was great,” Celtics coach Ime Udoka said of his team’s third-quarter performance. “It was different from the first half. I felt like, offensively, we got going as well, knocked a little bit of the rust off in the first half.”