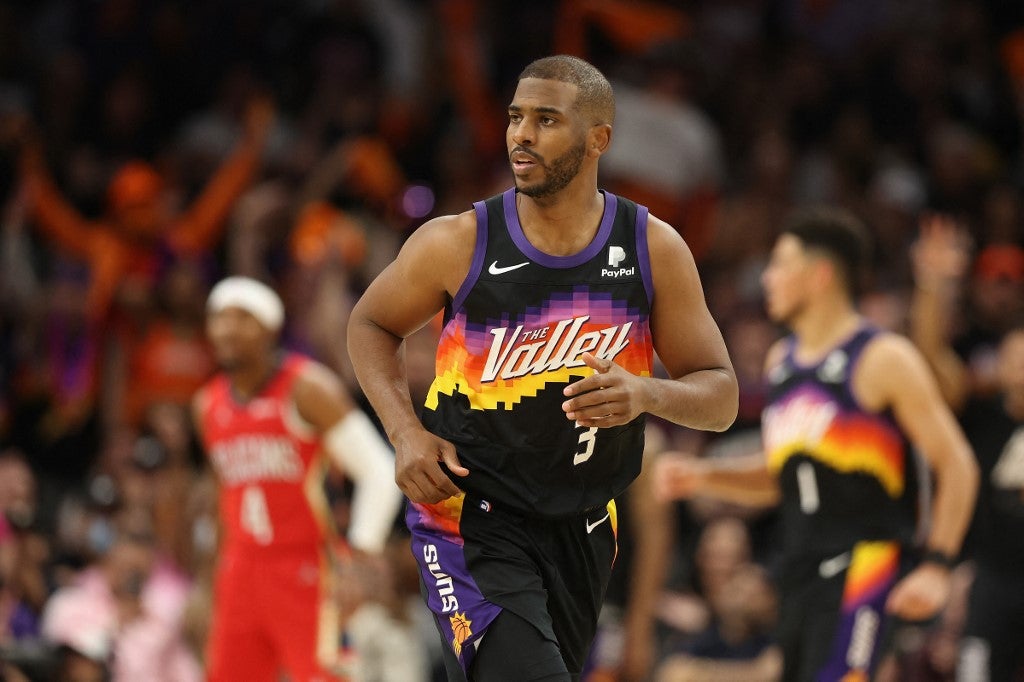 Chris Paul #3 of the Phoenix Suns reacts after hitting a three-point shot against the New Orleans Pelicans during the second half of Game One of the Western Conference First Round NBA Playoffs at Footprint Center on April 17, 2022 in Phoenix, Arizona. The Suns defeated the Pelicans 110-109. Christian Petersen/Getty Images/AFP

Chris Paul scored 19 of his 30 points in the fourth quarter to help the Phoenix Suns deflate a New Orleans comeback attempt and post a 110-99 victory over the visiting Pelicans on Sunday night in the opening game of their Western Conference playoff series.

Paul made 12 of 16 field-goal attempts — including 4 of 6 from 3-point range — and also contributed 10 assists, seven rebounds and three steals for top-seeded Phoenix, which led by as many as 23 points in the wire-to-wire victory.

Game 2 is Tuesday night in Phoenix.

Nance drilled a 3-pointer with 9:41 to go in the game to bring New Orleans within 87-81. Paul responded with two 3-pointers, a layup, a short shot and a driving layup through traffic during a span of 3:25 as the Suns stretched their lead to 99-85 with 6:01 remaining.

Mikal Bridges and Ayton added baskets as the Phoenix lead grew back to 18 with 4:48 left. New Orleans later made one last push and Trey Murphy III drilled a 3-pointer to cut the deficit to 106-97 with 1:44 left before Phoenix closed it out.

Cameron Johnson added 13 points and Bridges tallied 11 for Phoenix, which shot 53.8 percent from the field, including 10 of 28 from 3-point range.

The Pelicans made 37.9 percent of their shots and were 9 of 23 from behind the arc.

The Suns displayed they weren’t rusty while leading by as many as 16 points in the first quarter. Phoenix shot 61.1 percent (11 of 18) from the field in the period while the Pelicans made just 23.1 percent (6 of 26). The Suns took a 28-16 lead into the second quarter.

Nance’s steal and layup with 0.3 seconds remaining left the Pelicans down 79-71 entering the final stanza.