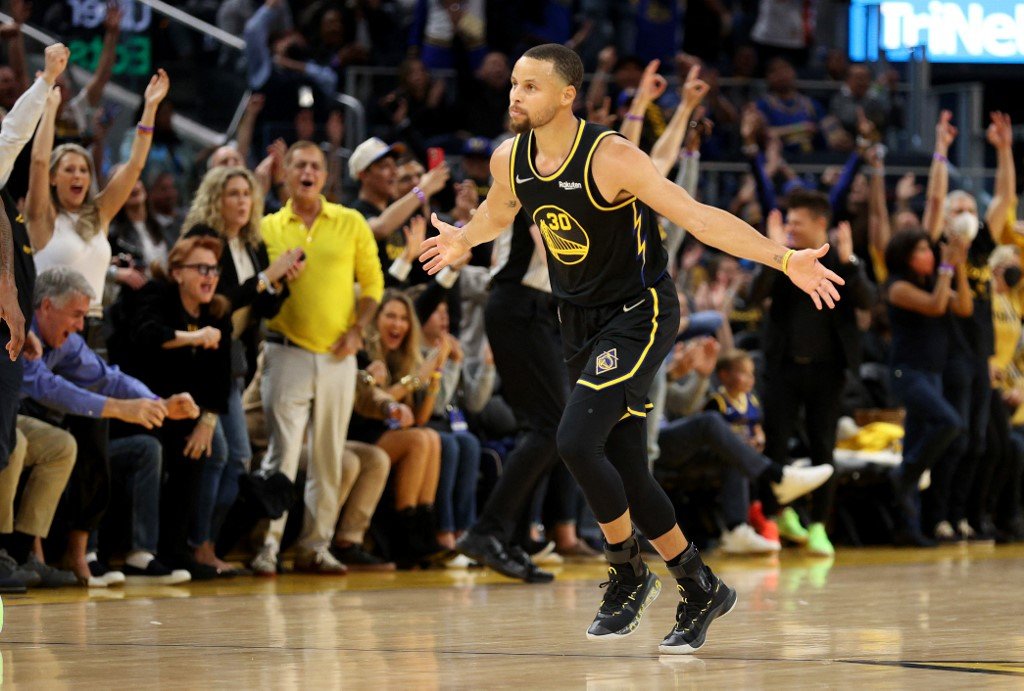 Stephen Curry #30 of the Golden State Warriors reacts after he made a three-point basket against the Denver Nuggets at the end of the first half during Game One of the Western Conference First Round NBA Playoffs at Chase Center on April 16, 2022 in San Francisco, California. Ezra Shaw/Getty Images/AFP

Jordan Poole was so explosive in Golden State’s playoff opener that Stephen Curry might be coming off the bench for a second straight game.

Poole certainly has a hard act to follow up when the third-seeded Warriors host the sixth-seeded Denver Nuggets in Game 2 of the Western Conference first-round series on Monday night at San Francisco.

Legendary Hall of Famer Wilt Chamberlain holds the franchise record of 35 in 1960 for the Philadelphia Warriors.

“Wow, what a playoff debut,” Warriors guard Klay Thompson said. “He’s just incredible. What a star in the making.”

Poole drew the start in Game 1 ahead of Curry as the latter made his return from a left foot injury that sidelined him for 12 games. Curry scored 16 points on 5-of-13 shooting in 22 minutes.

Thompson liked what he saw from his long-time backcourt mate.

“I thought he looked great,” Thompson said. “His shot was short in the first half, but that’s to be expected when you come off a long layoff. But he’s still Steph Curry.”

Golden State coach Steve Kerr hasn’t announced whether he will stick to the current plan or re-insert Curry into the starting lineup. Regardless, Poole was just happy that playoff game No. 1 was an overwhelming success.

“It was good to get the first one under my belt,” Poole said. “I waited two years for this. (Curry and Thompson), they told me to continue to be me and to play my game and be ready for the moment.”

Perhaps Poole’s performance against the Nuggets shouldn’t have been viewed as such a surprise. He averaged 22.7 points and made 14 of 23 3-point attempts in three regular-season appearances against Denver.

No matter who starts Monday, Game 1 displayed that Golden State will use a lot of three-guard alignments throughout this series.

“When you have three shooters and scorers like Steph Curry, Jordan Poole and Klay Thompson, this has to be a multiple-effort series,” Nuggets coach Michael Malone said. “They are not coming down jacking bad shots. They are going to work and work and work and move you to get the best shot. We have to be willing and able to defend for the entirety of the 24-second clock.”

Nikola Jokic, the favorite to repeat as league MVP, registered 25 points, 10 rebounds and six assists for Denver. But he didn’t pack a big presence in a contest in which the Nuggets trailed by as many as 24 points.

“I think I missed a couple of easy ones, but I think that they were defending me really well,” Jokic said. “So I need to be better. I just need to at least make the layups and easy shots.”

Will Barton added 24 points, but the end result is that the Nuggets didn’t resemble the squad that won three of four regular-season outings against the Warriors.

There also continue to be rumblings that star guard Jamal Murray — out the past 12 months due to an ACL tear — could return later in the series.

And after the Game 1 loss, forward Michael Porter Jr. said he might return during the series. Porter has been sidelined five-plus months due to back woes that included undergoing surgery for the third time in the past 4 1/2 years.

“Right now, I’m taking it game by game. I’m not ruling anything out,” Porter told ESPN. “This is a thing I don’t ever want to deal with again, so I’m just taking my time. … Every day I’m getting closer.”

Denver will get reserve guard Facundo Campazzo back from a one-game suspension for pushing Los Angeles Lakers guard Wayne Ellington from behind in the regular-season finale on April 10.