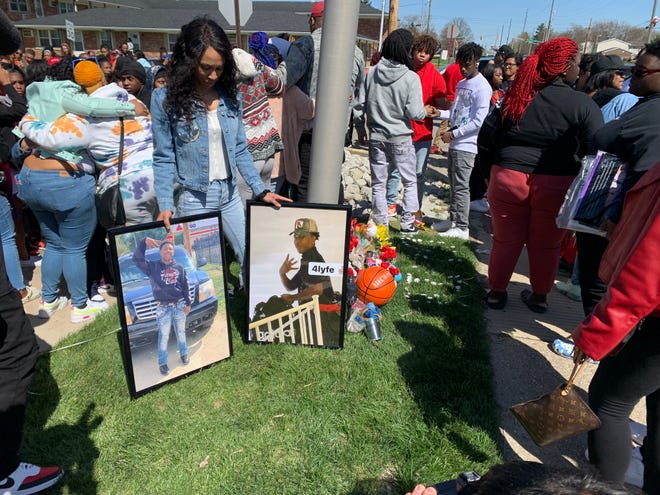 At the corner of East 30th Street and Lesley Avenue gathered a sea of people dressed in red, white and black, clutching balloons, basketballs and one another. These are the family and friends of Michael Duerson III, dressed in his favorite colors, holding some of his favorite things.

Duerson III, 16, was fatally injured by gunfire at about 10 p.m. Sunday, April 10, 2022 in the 5600 block of East 30th Street. Emergency medical personnel took him in critical condition to a hospital where he died. Indianapolis Metropolitan Police Department investigators have released few details about the shooting, but said they believe Duerson received a phone call to meet someone and that he likely knew the person.

Duerson, or MJ as he was called by his family, was a student at Ben Davis High School. He loved to play sports, especially basketball, and listening to music, said his father, Michael Duerson Jr.

Duerson’s grandfather, Antonio Lanier, organized a prayer vigil and balloon release to honor his daughter’s wishes of remembering Duerson near where his grandson was killed. Many people gathered with Duerson’s family to remember and honor his life.

“I don’t want nobody to have to stand here and go through this,” said Lanier, “I really don’t.”

Family and friends gathered around Duerson’s memorial as many came forward to pray, to grieve and to ask for help to solve this case.

Duerson’s grandmother, Cynthia Lanier, was one of the many people to lead mourners in prayer. “This is not what should be gathering us together on Easter weekend,” she shouted.

Family and friends of Duerson are pleading for anyone with information about his death to come forward.

“One of the reasons we wanted to have a prayer vigil and a balloon release is because we want to breathe life back into this. We don’t want this to blow away in the wind,” his grandfather said. “Everybody who sees this, I want you to look at the hurt on the parents’ faces. We are real upset and we need help. We need help from this community, we don’t need people holding secrets because we wouldn’t.”

Anyone with information about the shooting on East 30th Street is asked to contact Detective Larry Craciunoiu at 317-327-3475 or at Larry.Craciunoiu@indy.gov. Anonymous tips can be made through Crime Stoppers of Central Indiana at 317-262-8477.