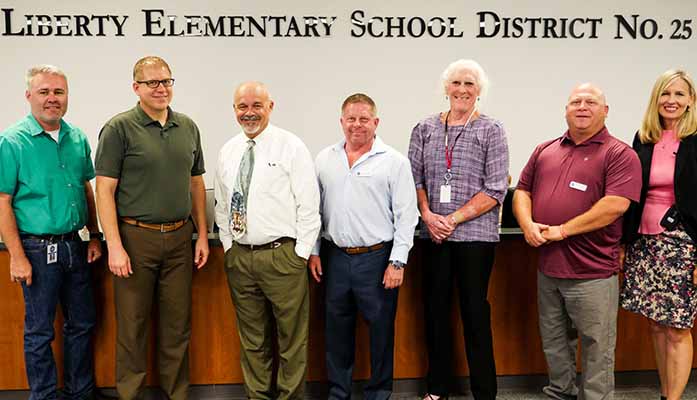 Certainly, the legislature did not intend for this to be allowable when they wrote the statute that allows teachers to double dip.

On June 27, 2022, the Liberty 25 school board voted 3-2 to approve outsourcing the superintendent job to a staffing agency. Effective June 30, Liberty Superintendent Dr. Lori Shough will retire from the district to become an employee of Educational Services, LLC (“ESI”) and return to the district on July 1 – but drawing a paycheck from ESI.

“Retire/rehire” schemes are designed to take advantage of the “Return to Work” rules governing the state’s retirement plans that prohibit participants in the plan from going back to work after retirement for more than 20 hours a week over a 20-week period. However, according to the contract between ESI and the district, ESI will assume “full control over the employment, direction, supervision, evaluation, compensation, discipline and discharge” of Shough, raising important legal questions about the plan.

While such retire/rehire schemes may be common with ordinary staff and employees, the direction and control of a superintendent is a statutory duty of the governing board. The superintendent is the chief executive officer of the district and has contract signing and spending authority, among many other legal responsibilities.

Dr. Shough returning as the employee of ESI has no such statutory authority to allocate tax dollars or have signatory powers for the district, raising questions of a violation of the “Public Monies” Law.

Powers and duties of public school governing boards in Arizona are governed by A.R.S. 15-341, A.R.S. 15-342 and other statutes which do not provide that statutory powers given to the Liberty 25 Board may be outsourced to an outside staffing agency. In fact, A.R.S. 15-503 explicitly states that the board may “employ” a superintendent. Other statutes set out how such employment agreements must be structured. And under the district’s own policies, the governing board is required to employ a superintendent to administer all aspects of the school system.

The governing board also allowed the superintendent to sign the ESI staffing agreement both as the “worker” and the “Client,” further removing all control over employment, direction, supervision, evaluation, compensation, discipline and discharge of its superintendent.

I have also called into the question the legal review provided by the district’s law firm Gust-Rosenfeld. Gust-Rosenfeld, the district’s law firm, not only allowed but encouraged this contract to be signed a year ago. The whole scheme needs to be reviewed by the county attorney or the attorney general’s office. Why should board members put in this effort and spend countless hours of time just to have schemes like this subject us all to personal liability? Who is going to be willing to volunteer as a board member when school districts do such things?

Bryan Parks is a member of the Liberty Unified School District’s Governing Board.

Some Get Soaked Again