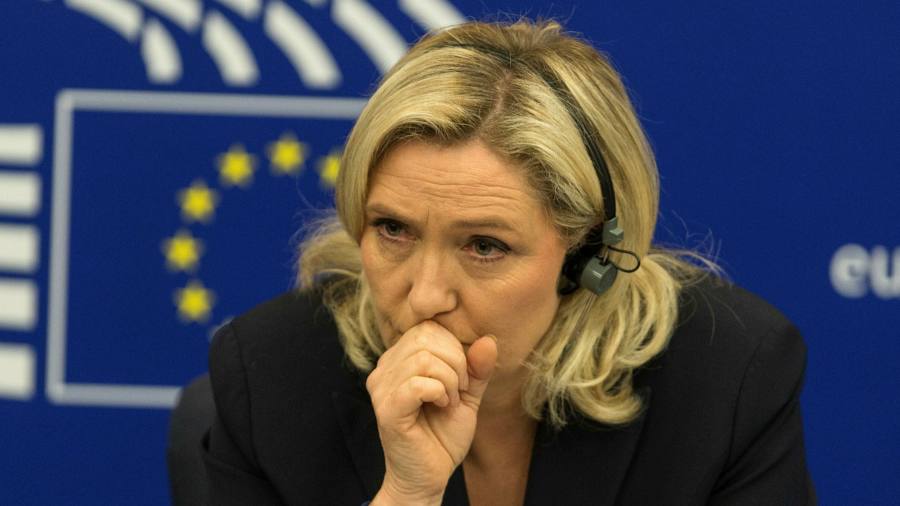 French far-right presidential challenger Marine Le Pen has dismissed allegations that she misappropriated tens of thousands of European Union funds as “dirty tricks” from the EU less than a week away from a tight election race against Emmanuel Macron.

Le Pen has come under scrutiny over her party’s use of EU funds dating back to when she was a European member of parliament, after the European anti-fraud office, known as Olaf, submitted a report listing alleged abuses to French prosecutors.

Olaf confirmed on Monday it had finalised a report in September last year, while Paris prosecutors said they received the allegations in March and had begun examining it, although they declined to comment on their content. French investigative news site Mediapart on Saturday published excerpts of the report, and said Le Pen was accused of misappropriating €137,000. The FT could not verify the extract published by Mediapart.

“I’m used to these kind of dirty tricks of the European Union, a few days before the second round. I don’t think the French will fall for that,” Le Pen told journalists on Monday on the sidelines of a visit to Normandy in northern France as she pursued her campaign. “I evidently absolutely reject these accusations.”

Le Pen has been in the spotlight over her party’s use of EU funds before, and investigating magistrates in France placed her under formal investigation in 2018 for alleged misuse of public funds over the salaries paid to EU parliamentary assistants. That case has yet to run its course.

French prosecutors have yet to decide whether to take the latest allegations further and bring charges. Some of the funds under scrutiny date back to 2010, according to Mediapart, which said Olaf claimed that in total just over €617,000 was misappropriated, including by other far-right French members of parliament from Le Pen’s party, now called the Rassemblement National (National Rally).

They are accused not of benefiting personally but of misusing funds designated for EU-linked affairs for events that pertained to national French affairs or internal party matters. Mediapart cited the example of €23,100 used in 2014 to buy promotional kit for Le Pen’s party such as key rings, and later distributed at a congress for her far-right movement in France.

Rodolphe Bosselut, a lawyer for Marine Le Pen, said on Sunday in a statement that the far-right candidate had never seen the final accusations of the report, and had “not been called upon by any French judicial authority”.

The allegations have emerged days ahead of an election run-off on April 24. President Macron is favoured to win and secure a second term, according to opinion polls putting him on about 54 per cent versus 46 per cent for Le Pen.

Both candidates have criss-crossed France in recent days to try to rally support, including wooing disappointed leftwing voters who backed leftist Jean-Luc Mélenchon in a first round of voting. Macron and Le Pen are due to face each other in a televised debate on April 20.

In the run-up to the election in early April, French prosecutors opened a preliminary probe into tax fraud allegations made against US-based McKinsey, after a senate inquiry into the French government’s use of private consulting firms during Macron’s time in office. That investigation proved a setback for Macron on the campaign trail as opponents seized on it.