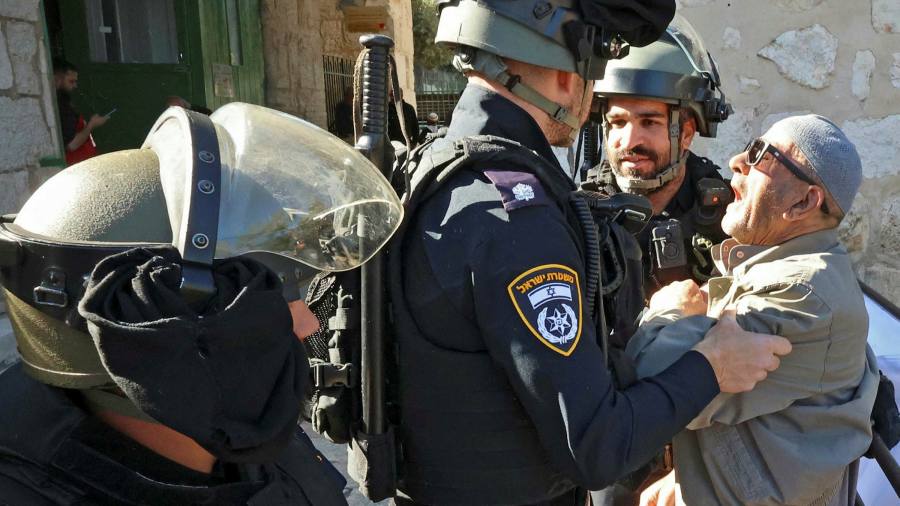 Clashes erupted on Friday at Jerusalem’s Al Aqsa Mosque between Israeli security forces and Palestinian worshippers after weeks of escalating violence, as the Muslim holy month of Ramadan coincided with the start of the Jewish Passover holiday.

Palestinian health officials said at least 150 people had been injured after Israeli police moved in to the mosque compound after early morning prayers. The police said their operation was aimed at stopping rioters who threw stones and set off fireworks, including at the Western Wall, the Jewish holy site. Israeli authorities said more than 300 had been arrested, including inside the mosque itself.

A touchstone of religious and political tensions, the Al Aqsa Mosque is the third-holiest site in Islam and the compound it sits in is referred to in Jewish tradition as the Temple Mount, site of the biblical Jewish temple. Clashes at the site last year during Ramadan precipitated the 11-day conflict between Israel and militant group Hamas in the Gaza Strip.

This year Ramadan has coincided with the Passover holiday that began Friday evening as well as Easter, with all monotheistic faiths congregating this weekend in the one square kilometre of Jerusalem’s Old City.

The Palestinian Authority and neighbouring Jordan condemned the Israeli actions. Mohammed Shtayyeh, Palestinian prime minister, called it a “brutal assault and desecration . . . especially during holy Ramadan”. Hamas in a statement described the clashes as a “barbaric attack” and said “Israel will bear responsibility for the outcome”.

Mansour Abbas, head of the Arab-Israeli Ra’am party and a key coalition ally in Israel’s government, also condemned the behaviour of the Israel police and said the “sanctity” of the Al Aqsa Mosque was a “red line”.

“Israel is committed to freedom of worship for people of all faiths in Jerusalem, and our goal is to enable peaceful prayer for believers during the Ramadan holiday,” Lapid said. “We all pray for freedom, security, calm, and good relations between neighbours. I call on our neighbours’ leaders to act in this spirit.”

After several hours of clashes through the morning, Israeli authorities reopened the Al Aqsa Mosque compound for midday prayers. Tens of thousands of worshippers attended, with no significant disturbances reported.

The rising tensions in Jerusalem come after several weeks of escalating violence in Israel and the occupied West Bank. Four Palestinian attacks inside Israeli cities in the past month have left 12 Israelis and two Ukrainian nationals dead.

Israel has been put on a heightened state of alert, with police officers flooding city streets and the Israeli military doubling the number of army battalions in the West Bank. At least 16 Palestinians have been killed in the West Bank in the past two weeks in the ensuing clashes with Israeli forces.