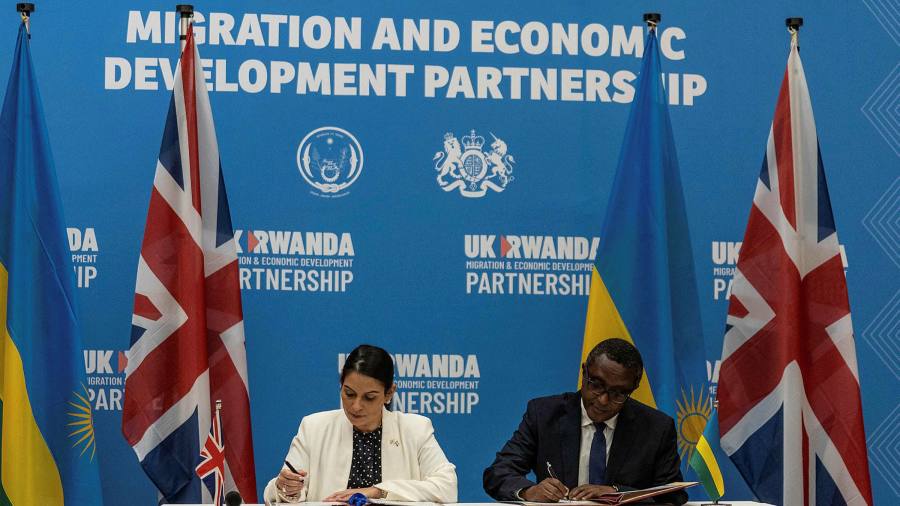 As he sought to reassure critics of his plan to deport asylum seekers 4,000 miles away to Rwanda, UK prime minister Boris Johnson described the east African nation as “one of the safest countries in the world, globally recognised for its record of welcoming and integrating migrants”.

President Paul Kagame’s government will receive a £120mn upfront payment to host what the UK opposition has described as a “shameful” detention system. Vincent Biruta, Rwanda’s foreign minister, insisted Kigali would ensure the arrivals were “protected, respected and empowered” and that they could “settle permanently in Rwanda if they chose”.

But his words obscure Rwanda’s chequered treatment of refugees under similar offshore deportation programmes, including a “voluntary” 2014 Israeli initiative to fly African deportees to Kigali that later collapsed. The UN High Commissioner for Refugees said in 2017, without naming Rwanda, that there was a lot of “secrecy surrounding this policy and the lack of transparency concerning its implementation”.

More recently Rwanda agreed to take part in an African Union scheme to rescue refugees and asylum-seekers from war-torn Libya, but has taken in only about 190 of an original pledge of 30,000. It also offered to take in Afghan girls following the Taliban takeover of the country last year.

Rwanda, which has a population of 13mn, hosted about 130,000 refugees and asylum seekers at the end of 2021, according to the UNHCR, the vast majority from neighbouring Democratic Republic of Congo and Burundi.

New arrivals are allowed to play a role in Rwanda’s economy, such as the right to work. “The relationship between the government and refugees is good because refugees receive an identity card that allows them to look for jobs,” said a senior officer with the Burundian Coalition of Human Rights Defenders Living in Refugee Camps.

But the official also stressed that some refugees in Rwanda “don’t receive enough money” to buy enough food or healthcare. “There are people who just starve,” he said. Donor funding for refugees in Rwanda has run low in recent years, forcing cuts to some aid programmes.

Four years ago, Rwandan police arrested more than 60 refugees, mostly from DRC, who protested over cuts in their food rations. Some were charged with “spreading false information with intent to create a hostile international opinion against the Rwandan state”.

While the UK praised Rwanda’s treatment of other nations’ refugees, critics of Kagame argue that international deals may only serve to distract from allegations that his government — praised for transforming the nation into a thriving economy after the genocide of 1994 — silences opponents at home and abroad. It has denied these claims but some of Kagame’s critics have died in mysterious circumstances.

“Rwanda is a country that does not respect rule of law nor some of the most fundamental human rights. Anyone even perceived as critical to the government or its policies can be targeted,” said Lewis Mudge, central Africa director at Human Rights Watch.

He added: “Rwanda has routinely demonstrated how it holds protections afforded refugees under international law in low regard. Refugees have been abused in Rwanda and the government has, at times, kidnapped Rwandan refugees outside the country to bring them home to face trial and ill treatment.”

Critics say the international initiatives are a way for Rwanda’s leaders to burnish their image as indispensable security partner and as diplomatic cover for the persecution of dissidents.

The country’s armed forces have been sent to intervene in conflicts in the Central African Republic and Mozambique, where Rwandan soldiers are central to efforts to push Islamist insurgents away from western-funded offshore gas investments.

“Rwanda is accepting these refugees from the UK only for the image of the government,” said Victoire Ingabire Umuhoza, an opposition leader who has spent time in jail. People there “don’t understand how a poor country like Rwanda accepts to receive the asylum seekers from the UK, which is a rich country”, she added. The UK deal was a way “to show off” that Kagame “is a great leader of Africa”, she said.

The UN has come out strongly against the UK deportation scheme, saying that it was up to rich nations to “show solidarity in supporting Rwanda and the refugees it already hosts, and not the other way around”.

“The UNHCR urged both the UK and Rwanda to rethink their plans. While Rwanda has generously provided a safe haven to refugees fleeing conflict and persecution for decades, the majority live in camps with limited access to economic opportunities,” the agency said.

Almost 20 years ago, then UK prime minister Tony Blair failed in an attempt to persuade Tanzania to process British asylum claims. Johnson this week said those who were deported to Rwanda “would be given the opportunity to build a new life in that dynamic country”.

The same day, however, there were mixed messages from Rwanda on who exactly would be welcomed overall. “This programme will be dedicated to asylum seekers who are already in the UK,” Biruta said, adding that “we’d prefer not to receive people from neighbouring countries, immediate neighbours like DRC, like Burundi, Uganda or Tanzania”.

How Russia’s propaganda machine is reshaping the African narrative