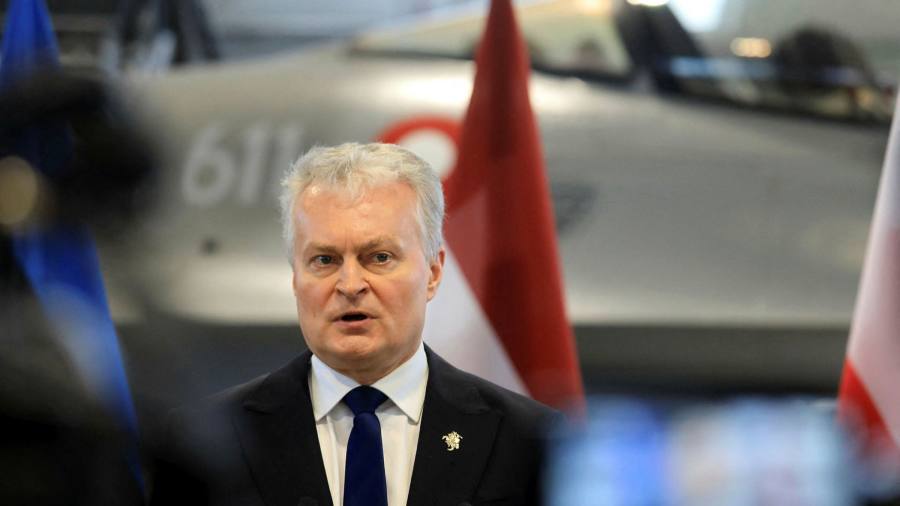 Finland and Sweden joining Nato would boost the security of the Baltic states and reinforce the western military alliance, said Lithuania’s president, urging the two Nordic countries not to waste time in applying.

Gitanas Nauseda brushed aside Russian threats to increase its military presence in the Baltics and deploy nuclear weapons there if the pair agreed to sign up to the alliance. He said Moscow had kept such weapons in its Kaliningrad exclave for many years and that Finland and Sweden were only responding to Russian aggression.

“Sweden and Finland joining Nato would improve the security situation in the Baltic region. We will be able to better supervise and control the Baltic region from the military point of view. But this will also strengthen Nato as an organisation,” Nauseda told the Financial Times.

Both countries are EU members but stayed out of Nato, believing relations with Russia were better served by remaining outside the alliance. But in a sharp reversal, Finland is set to apply for Nato membership in the coming weeks while Sweden is considering whether to follow suit, as both assess how to respond to Russia’s invasion of Ukraine, another non-Nato member.

Public opinion in the two Nordic countries has swung rapidly in favour of joining the alliance, pushing politicians in both Helsinki and Stockholm to take quick decisions even amid warnings of possible escalation.

Russia, which had previously warned of “serious military and political consequences” if either joined Nato, this week said it would be forced to strengthen its borders with the alliance, which would more than double in length if Finland joined.

Dmitry Medvedev, Russia’s former president, also warned that nuclear weapons would be moved to the Baltics, although Lithuanian officials first warned in 2018 that they were in Kaliningrad.

“What would it mean for all of us?” asked Nauseda. “Probably there might be some aggressive rhetoric from the side of Russia, maybe even some decisions to increase the military presence here. Anyway, the Kaliningrad region is probably the most militarised region in Europe, and tactical nuclear weapons are already there. I don’t think we should react to this rhetoric.”

He said Finland and Sweden “cannot waste time, and need to implement decisions as soon as possible,” adding that they could see “the rhetoric of Putin’s regime is becoming more and more aggressive”. Finland wants to make a decision before Nato’s June summit in Madrid, say officials in Helsinki.

The Baltic countries would like the Swedish island of Gotland, commonly referred to as an aircraft carrier in the Baltic Sea, to be part of Nato as well as the well-regarded Finnish military.

Lithuania’s president endorsed a proposal by the head of Nato to boost the 1,000-strong troop battalions in Estonia, Latvia, Lithuania and Poland to brigades, which typically number between 3,000 to 5,000 soldiers. 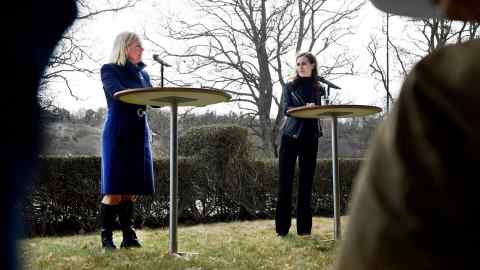 Nauseda also backed the call of Kaja Kallas, Estonia’s prime minister, for Nato to change its air policing mission in the Baltics to one of air defence, allowing it to shoot down enemy aircraft if necessary.

“We need boots on the ground. Forward defence instead of deterrence or fast reinforcement. The most credible deterrence is practical deployment of foreign troops here in the Baltic states and in Poland . . . Air policing is maybe good for peacetime, but this is not an adequate solution having in mind what’s happening in Ukraine,” he added.

Lithuania is boosting its defence spending to 2.5 per cent of gross domestic product this year — well above Nato’s 2 per cent target — and is aiming for 3 per cent. Nauseda said the money would be spent not just on new equipment but on infrastructure and accommodation for foreign troops, and it would soon double its capacity.

Nauseda, who recently met Ukraine president Volodymyr Zelensky in Kyiv, stressed how Ukraine needed help not only with anti-air and anti-ship missiles but also with reconstructing the country and opening up logistical corridors to allow it to export goods.

He accused Russia of “intentionally and cynically committing genocide against the Ukrainian nation” and warned that its leaders in Moscow would be held responsible. “We will see that nothing is forgotten,” added Nauseda.